WOMEN’S HOCKEY The Big Red achieved an undefeated Ivy League season, a 13th Ivy title, and a trip to the NCAA tournament. The team was also runner-up at the ECAC Championship, losing to Clarkson 1-0 in the final before falling again to the Golden Knights 3-1 in the NCAA quarterfinals. Micah Hart ’19 was a first-team All-ECAC pick after leading a Cornell defense that allowed only 1.7 points per game. Goalie Paula Voorheis ’17 was named the ECAC’s Student-Athlete of the Year, honoring achievement in the classroom and on the ice. Doug Derraugh ’91, was named the ECAC Coach of the Year for the third time.

MEN’S HOCKEY The Big Red qualified for the NCAA tournament for the first time in five seasons. Cornell earned a spot in the playoffs—where it lost 5-0 to UMass, Lowell—after going 18-6-5 in the regular season and then finishing second in the ECAC playoffs. Jake Weidner ’17 was named ECAC Defensive Forward of the Year while defenseman Yanni Kaldis ’20 was named to the league All-Rookie team. Kaldis was also a first-team All-Ivy pick while goalie Mitch Gillam ’17, defenseman Patrick McCarron ’17, and forward Mitch Vanderlaan ’19 were named second team All-Ivy.

WRESTLING Gabe Dean ’17 became a four-time All-American by finishing second at the NCAA Championships in St. Louis in March. Dean, who lost the title match at 184 pounds by one point, finished the season 30-1 to become Cornell’s all-time leader in wins with 152. Three other Big Red wrestlers earned All-American honors—Brian Realbuto ’17, fifth at 174; Dylan Palacio ’17, sixth at 157; and Brandon Womack ’19, eighth at 165. As a team, Cornell was eighth and is one of only two schools to finish in the top ten each of the past 10 seasons. The Big Red also won an 11th straight Eastern Intercollegiate Wrestling Association title and a 15th straight Ivy League championship.

MEN’S TRACK AND FIELD Two Cornell athletes earned All-American honors through their performances at the NCAA indoor track and field championships. Rudy Winkler ’17 received first-team laurels after finishing fourth in the weight throw. He was also named the Northeast Region Field Athlete of the Year for the second straight season after a record-breaking weight throw of 75 feet, 7.75 inches at the Heptagonal Championships, helping Cornell to a second-place finish. Austin Jamerson ’17 was a second-team All-American after placing 13th in the heptathlon at the national meet. 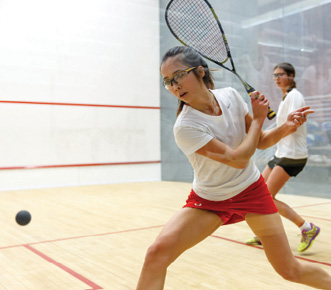 WOMEN’S BASKETBALL Nia Marshall ’17 led the Big Red in scoring for a third straight season to finish her career as the team’s all-time leading scorer with 1,685 points. Previous record holder Karen Walker ’91 (1,650 points) was on hand to see Marshall break her record during a 55-44 win over Princeton, Cornell’s first over the Tigers in 17 tries. Marshall averaged 15.3 points per game to earn first-team All-Ivy honors for a second time, becoming the first player in program history to do so. Megan LeDuc ’17 earned honorable mention All-Ivy after averaging 12.1 points and 3.5 assists per game.

WOMEN’S GYMNASTICS The Big Red finished second at the ECAC championships and cleaned up in the awards department. Lyanda Dudley ’19 was crowned ECAC Gymnast of the Year after winning the all-around at the title meet. Kaitlin Green ’19 was second in the beam and walked away with Specialist of the Year laurels. Meanwhile, Alex Bourgeois ’17 and Kelsy Kurfirst ’19 shared the Scholar-Athlete of the Year award and Melanie Dilliplane was named Assistant Coach of the Year. Earlier in the season, Cornell won its second straight Ivy Classic title and 12th overall.

WOMEN’S FENCING Victoria Wines ’17  became the first Cornell fencer to earn four All-Ivy honors after placing fourth in the epee competition at the Ivy League tournament. She then took home a second place finish in the epee at the NCAA Northeast Regionals for the second straight season to earn a spot in the national championships.

MEN’S SWIMMING Alex Evdokimov ’18 swept the Ivy League breaststroke titles for the third season, winning the 100 breast with a conference, meet, pool, and school record time of 52.13. In the 200, he pulled away late in the race to win with a time of 1:53.72. Earlier in the season, Cornell extended its non-conference winning streak to 14 with a win over St. Bonaventure.

WRESTLING Mack Lewnes ’11 was inducted into the Eastern Intercollegiate Wrestling Association Hall of Fame during the Eastern championships. Lewnes left East Hill as the Big Red’s career leader in wins after going 150-12. He was also the ninth four-time EIWA champion in tournament history and a three-time All-American, helping Cornell to four Eastern titles and a pair of NCAA runner-up finishes.

BASKETBALL Jeomi Maduka ’09 and Garry Munson ’66 were named to the inaugural class of Ivy League hoops legends. Maduka was the league’s player of the year and an honorable mention All-American in 2008 when she helped the Big Red to its only Ivy League title and a trip to the NCAA tournament. Still ranked among the top 10 rebounders in school history after 50 years away from the court, Munson led Cornell to a 49-24 overall record and 30-12 in Ivy League play—the best three-year total until the 2000s.

MEN’S HOCKEY The 1970 team is still the only unbeaten, untied team in NCAA Division I men’s hockey history, and it’s now part of the ECAC Hall of Fame. The Big Red went 29-0-0 that season, capped off by a 6-4 win over Clarkson in the championship game. Established in 2015, the ECAC Hall of Fame recognizes former student-athletes, coaches, administrators, teams, officials, and support staff for outstanding achievements, service, dedication, commitment, and contributions to the league.