MEN’S HOCKEY Cornell returned to the top of the national rankings for the first time in nearly 15 seasons, earning first place in both the USCHO and USA Today/USA Hockey Magazine polls at the end of January. The Big Red finished the regular season ranked second in the nation after going 23-4-2 overall and winning the ECAC regular season championship for the first time since 2004–05. Matt Galajda ’21 made history as the first freshman to be named ECAC Hockey Goalie of the Year after going 19-3-2 with eight shutouts and a 1.49 goals-against average. He was also named ECAC and Ivy League Rookie of the Year, Ivy Player of the Year, and a first-team all-league selection in both the ECAC and Ivies. 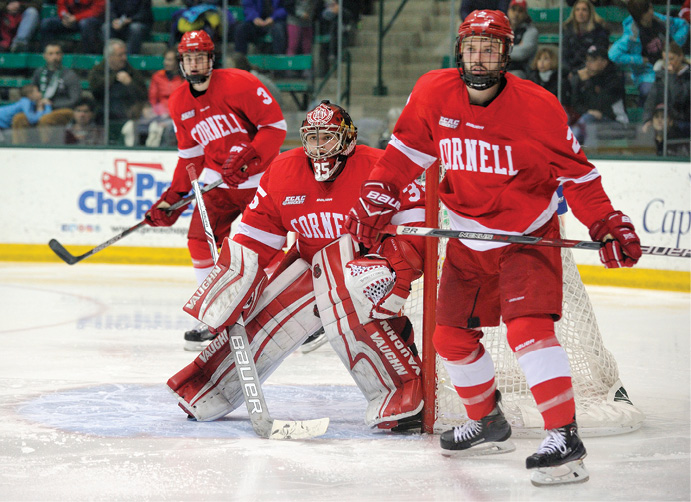 FENCING Two freshmen earned trips to the NCAA Championship with their performances at the Northeast Regional. Grace Ding ’21 finished fifth in women’s foil, going 7-4 in the final round to cap her rise from 19th place after the second round; Marissa Viqueira ’21 finished seventh in foil. Daria Schneider was co-named Ivy League Coach of the Year after the Big Red had four top-ten finishes in both saber and foil at the league round-robin tournament.

WRESTLING Yianni Diakomihalis ’21 became only the second Cornell wrestler (after Kyle Dake ’13) to win a national title as a freshman, taking first at 141 pounds with a dramatic 7-4 win in the final. Three others earned All-American honors: Ben Darmstadt ’21, sixth at 197 pounds; Jon Jay Chavez ’19, seventh at 165; and Max Dean ’21, eighth at 184. But the Big Red saw its record run of Eastern Intercollegiate Wrestling Association championships end at 11; Diakomihalis, Darmstadt, and Chavez won individual titles, but Cornell finished second. Cornell did keep its streak of Ivy championships alive at 16 straight seasons, the longest in any sport in league history, while extending its unbeaten streak to 82 Ivy matches.

MEN’S BASKETBALL By posting its best league finish since winning three straight titles in 2008–10, Cornell qualified for the Ivy tournament, where it lost to Harvard. The Big Red went 6-8 in the league, good enough for fourth place. Matt Morgan ’19 was a unanimous first-team All-Ivy pick after scoring a school-record 611 points, an average of 22.6 per game—the second highest in school history, behind Charles Rolle ’56, who averaged 23.0 in 1956. Stone Gettings ’19 became the fifth Cornell player to receive CoSIDA Academic All-American honors when he was named to the third team. An applied economics and management major with a 3.81 GPA, he received All-Ivy honorable mention after averaging 17.0 points and 6.7 rebounds per game.

SQUASH A pair of Cornell players enjoyed good runs at the College Squash Association Individual Championships in March. Michèle Garceau ’18 came up one match short of repeating as a second-team All-American, losing a five-set match in the finals of the Holleran South bracket. Garceau didn’t go empty-handed for the season, however, earning All-Ivy honors. On the men’s side, Jordan Brail ’18 reached the semifinals of the Molly North bracket before losing in four sets.

POLO Both the men’s and women’s teams added to their collection of regional championship trophies, with the women winning their 24th Northeast title and the men their 23rd. The women had an easy 22-4 win over Skidmore in the semifinals before beating Harvard 19-7 in the final as Shariah Harris ’20 and Hannah Noyes ’18 earned all-star honors. The men had a tighter title match, edging Western University 15-13 with Lorenzo Masias ’20 named an all-star.

FOOTBALL David Archer ’05 signed a contract extension to remain Cornell’s head football coach; the Big Red went 3-4 in the Ivy League last season, its best showing since 2011. Away from East Hill, Jim Knowles ’87 has become defensive coordinator at Oklahoma State University, which went 10-3 last season and was 14th in the national rankings. Knowles, who spent the previous eight seasons as defensive coordinator at Duke, was Cornell’s head coach from 2004–09 and an assistant from 1988–96.

TRACK AND FIELD Ben Rainero de Haan ’16 won the 3,000-meter run at the Netherlands indoor track and field championships in February with a time of 8:07.43. His record for the Big Red includes first-team All-Ivy honors in cross country and three Ivy track titles.