WOMEN’S TRACK AND FIELD After earning All-Academic honors from the U.S. Track & Field and Cross Country Coaches Association for her freshman season, Brittany Stenekes ’20 had an impressive summer, winning a gold medal and setting a school record in the 100-meter hurdles during Canada’s Summer Games in Winnipeg. Her finals time of 13.57 is nearly three-tenths of a second faster than that of previous record holder Hannah Garrity ’04, and Stenekes now holds four of the top six times in Cornell history. Earlier in the summer, she finished seventh in the 100-meter hurdles at the Junior Pan American Games with a time of 13.72.

FOOTBALL For only the second time in program history, Big Red football saw a team captain elected three times. After serving as a captain for his junior season in 2015, Miles Norris ’17 was tapped to lead the squad again in 2016, but suffered a leg injury in the first practice that sidelined him for the season. He spent the year rehabbing and serving as an intern in Cornell’s financial affairs office and returned for the current season; he will graduate in 2018.

FIELD HOCKEY After closing out its previous season with four straight victories, the Big Red went on to win four more this fall—for a total winning streak of eight games, matching the school record set in 2008 and 2009. The biggest win for the current squad was a 3-2 decision over the University of Maine, which entered the game ranked 24th in the nation. Kelly Johnson ’18 (seen below in a different game) made a career-high 10 saves while Krysten Mayers ’18 scored the game-winning goal.

WOMEN’S LACROSSE Cornell was named the 2017 “merit squad” for Division I by the Intercollegiate Women’s Lacrosse Coaches Association, a distinction given to the team with the highest grade point average. The Big Red posted a team GPA of 3.65 while excelling on the field, reaching as high as seventh in national rankings and finishing with a 13-6 record, including a NCAA playoff win over Notre Dame. Eight Big Red players were named to the IWLCA Academic Honor Roll and two were named Academic All-Ivy.

WOMEN’S TRIATHLON Taylor Knibb ’20 won the International Triathlon Union (ITU) World Junior Championship for the second straight year, pulling away from the field in the biking leg and then running five kilometers in 17:39 to win by 16 seconds in September’s race in Rotterdam. Knibb, who runs cross country for the Big Red, also became the youngest podium finisher in an ITU World Triathlon open event when she finished second to the reigning senior world champion during a race in Edmonton. Classmate Kyleigh Spearing ’20 was 57th at the World Juniors after winning the 2017 USA Triathlon Junior Elite National Championships in July.

MACCABIAH GAMES A pair of Cornell athletes earned medals at the 2017 event, a multi-sport competition open to Israeli and Jewish athletes from around the world. JoJo Fallas ’17 won gold with Team USA’s men’s basketball squad, averaging four points per game over the team’s five straight wins. Fallas, whose best outing came in a preliminary round win over Belarus when he scored 13 points, will play professionally in Israel this season after signing a contract with Ironi Ness Ziona in the Israeli Super League. Rose Gorski ’20 earned silver with the U.S. field hockey team, which beat Holland 3-2 in the semifinals before losing to Argentina 2-0.

WOMEN’S LACROSSE Three recent graduates and an assistant coach heard their names called in the first-ever draft of the Women’s Professional Lacrosse League. Renee Poullott ’17 was taken by the Upstate Pride (managed by Big Red head coach Jenny Graap ’86). Cornell assistant coach Margaret Corzel will also play for the Pride. Catherine Ellis ’17 was selected by the New England Command and Kristy Gilbert ’17 by the Norfolk Flight. The league will formally begin play in summer 2018.

FOOTBALL For the 34th straight season, Cornell has a former player competing in the NFL. J.C. Tretter ’13 began the season as the starting center for the Cleveland Browns after playing various positions on the offensive line for the Green Bay Packers, who made him their fourth-round draft pick in 2013. Quarterback Jeff Mathews ’14 signed with the Toronto Argonauts in the Canadian Football League and started a game in September. And the Cincinnati Bengals’ Bill Lazor ’94 received an unexpected promotion from quarterbacks coach to interim offensive coordinator. Lazor previously served as offensive coordinator of the Miami Dolphins as well as at the University of Virginia and SUNY Buffalo.

WOMEN’S TRACK & FIELD Artie Smith ’96 was named head coach of the Cornell team following Rich Bowman’s announcement that he would step back to an assistant’s role after seven years. Bowman served as assistant for 29 years before becoming head coach in 2010. Smith has been the Big Red’s distance coach for 18 years and will remain as head coach of women’s cross country, a post he has held since 2011.

MEN’S ROWING Drew Tennant ’04 has returned to the Big Red crew program as an assistant coach for the men’s heavyweight team after serving as a volunteer coach from 2010 to 2012. His previous experience includes serving as head coach and boathouse manager for Ithaca’s Cascadilla Boat Club. 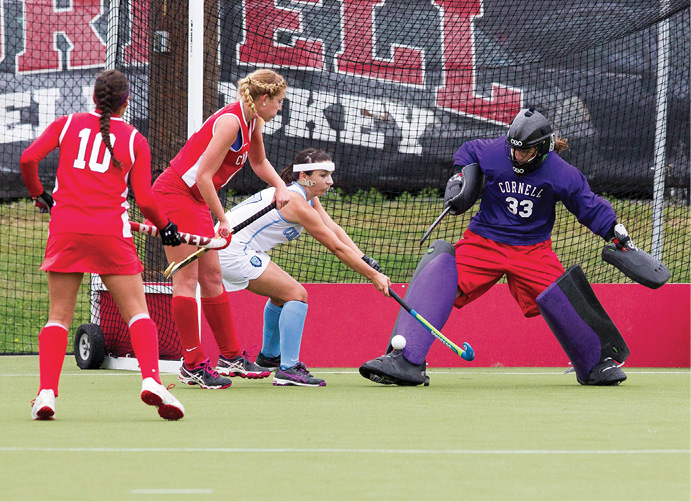 Goalie Kelly Johnson ’18 makes a save in a home game against Columbia. On defense for the Big Red are Isabel Josephs ’18 (left) and Sophie Graeff ’19. Photo: David Burbank/Cornell Athletic Communications