WOMEN’S ROWING Cornell was represented at the Henley Women’s Regatta in England for the first time this spring, sending both the varsity and second varsity eight boats. The varsity lost to eventual champion Oxford in the heats, while the second varsity lost to a boat from the Netherlands by just over a length. The event capped the stellar career of Kate Roach ’15 (second from left), who became the first female rower in Big Red history to win All-America honors three times when she was named to the Collegiate Rowing Coaches Association first team. LIGHTWEIGHT ROWING For the second straight year, the men’s lightweight varsity eight finished the season as undefeated national champions. The Big Red beat Columbia by a boat length in the finals at the 113th annual Intercollegiate Rowing Association (IRA) Regatta in Mercer, New Jersey, to claim its fifth title in ten years and sixth overall since the lightweight division was added in 1990. Not surprisingly, the varsity eight was named crew of the year by the IRA and the Eastern Association of Rowing Colleges (EARC); head coach Chris Kerber was named Ivy League, EARC, and IRA Coach of the Year. After the season, the eight won its first four races at the Henley Regatta before losing to a team from the Netherlands in the semifinals. FENCING Cornell sent five fencers to South Korea in July for the fifth annual Korea-USA Elite Fencing Invitational. Megan Buteau ’18, Regina Chen ’18, Luby Kiriakidi ’18, Ediona Sera ’16, and Victoria Wines ’17 competed for the U.S. squad, which included fencers from ten American colleges. Angelica Gangemi ’16 was in Korea at the same time competing in the World University Games, where she failed to advance out of the opening round in the foil. MEN’S TRACK & FIELD After finishing second at the Heps by 3.5 points, the men’s track and field team saw two of its field athletes take All-America honors at the NCAA Division I Championships. Rudy Winkler ’17 earned first-team kudos by placing eighth in the hammer throw with a school-record toss of 223 feet, 5 inches. He also participated in the USA Men’s Track & Field Championships, where he finished third in his flight. Stephen Mozia ’15 was 18th in the shot put to earn honorable mention All-America honors. Cornell has produced an All-American in each of the five outdoor throwing events since 2013. SAILING In its first season as a varsity squad, the women’s sailing team reached the national championships by finishing sixth at the western region semifinals in Newport Harbor, Rhode Island. Cornell finished 12th at the national event in May, posting the ninth-best score on the second day of the two-day event to jump three spots over their opening day finish. Earlier in the season, the Big Red marked its first varsity regatta win, topping an 18-team field on Cayuga Lake.

MEN’S SOCCER Former Big Red men’s soccer captain Jimmy Lannon ’12 has returned to the program as an assistant coach. Lannon had spent the past four seasons playing professionally in Germany and Austria. He finished his Cornell tenure sixth on the school’s career starts list, with 58, and was part of a turnaround that saw the Big Red go from 1-14 his freshman year to 8-2-6 in a senior season that included a 13-game unbeaten streak. MEN’S TRACK & FIELD Adrian Durant will take over the reins of the men’s track and field and cross country programs after three years as an assistant coach. Durant succeeds longtime head coach Roger Taylor, who retired in June. Durant has worked most closely with the sprinters during his time on East Hill, helping Big Red runners earn 26 Heps wins and six all-America honors. An accomplished sprinter himself, Durant has served as captain of the U.S. Virgin Islands national team, competing in the 2004 Olympic Games in Athens and four World Championships. He has also been head coach of the U.S. Virgin Islands team the past two years.

MEN’S TRACK & FIELD The late Robert Claire Mealey ’51 has been named to the Niagara Track and Field Hall of Fame by the Niagara Region of USA Track and Field. Mealey, who was the 1949 U.S. indoor national champion in the 1,000-yard run and a member of the outdoor national champion medley relay team in 1951, was inducted into the Cornell Athletic Hall of Fame in 1984. WRESTLING Kyle Dake ’13 took second place at the USA Wrestling World Team Trials in Madison, Wisconsin, in June. The only wrestler to win NCAA Division I titles in four weight classes, Dake entered the event ranked fourth in the nation and won his first three matches at 163 pounds before losing in the finals. Earlier in the spring, Dake was named USA Wrestling Athlete of the Week for May 4 after winning the Northeast Regional to qualify for the U.S. World Team Trials. Frank Perrelli ’11, BA ’12, now the club wrestling coach at Oklahoma State, competed at 126 pounds and lost in the quarterfinals. 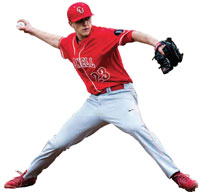 FOOTBALL Jeff Mathews ’14 made his pro­fessional football debut in the Canadian Football League in June, scoring a touchdown in the Hamilton Tiger-Cats’ 52-26 win over Winnipeg. Mathews is serving as a backup quarterback for the Tiger-Cats, who are coached by former Cornell head coach Kent Austin. Luke Tasker ’13 has been one of Hamilton’s leading receivers the past two seasons, but suffered an injury during the team’s preseason camp. BASEBALL A pair of Big Red pitchers will continue their college careers at Duke University, where they’re attending grad school. Due to injuries, Brian McAfee ’15 (left) and Kellen Urbon ’15 each graduated from Cornell with a remaining year of athletic eligibility. (Although the NCAA allows grad students to com­pete, Ivy League rules do not.) McAfee was a first-team All-Ivy pick in 2015 and pitched seven scoreless innings against eventual national champion Virginia. Urbon was 2-4 with a 2.36 ERA and was named Ivy Pitcher of the Week for April 14.