Over the past five seasons, women’s ice hockey has been on a roll. The Big Red has racked up a 133-29-12 record while winning four regular-season ECAC titles and four ECAC tournament titles. It has made three trips to the NCAA Frozen Four—including a heartbreaking 3-2 triple-overtime loss in the 2010 national championship game. And to top all that off, four recent and former players have shiny new Olympic gold medals around their necks.

The team’s recent success marks an impressive turnaround. Before head coach Doug Derraugh ’91 arrived in 2005, the women’s squad was struggling, with its last winning season in 1997. But during his job interview, Derraugh told athletic director Andy Noel that he saw major potential. “I said, ‘I don’t see any reason why we shouldn’t be one of the top teams in the country if I do my job correctly,'” recalls Derraugh, a former men’s team captain. “Where else in the U.S. can you get an Ivy League education and play in a place where ice hockey is one of the top sports on campus? At most colleges in the U.S. it’s all about football and basketball. In a place where hockey is highly recognized in a beautiful location like Ithaca, at a great university, I felt the program would sell itself if we got out there and worked hard.”

The program turned the corner in 2009 with a 21-9-6 record, building momentum that has continued unabated. Landing outstanding players has helped, of course. Canada’s 2014 Olympic championship squad included four Cornellians—Rebecca Johnston ’11, Laura Fortino ’13, Lauriane Rougeau ’13, and Brianne Jenner ’14—reflecting the quality of recent recruits. “Once you establish some success, a lot of top players will take a look at your program,” Derraugh notes, “and it gets the ball rolling.”

The team ended the 2013–14 season with a 24-6-4 record after falling to Mercyhurst in the NCAA quarterfinals for the second consecutive year. But with Jenner—one of its best players—on leave to Team Canada, some observers had doubted they would even make it to the postseason. “It’s heartbreaking when you get to the same spot that you did last year and tumble right there; that’s definitely a hard pill to swallow,” says Jillian Saulnier ’15, the team’s leading scorer. “But I’m very proud of the girls, especially after losing the Olympians. I thought we came together really well as a unit. And that was our main focus—being a team and having that full dynamic. Even though we lost at the end, I consider it a pretty successful season.”

While Derraugh acknowledges that the Olympics can affect a team’s roster, he notes with a laugh that it’s a nice problem to have. “Other coaches wish they could lose their players to the Olympics,” he says. “The players defer from school, so when they come back they’re a year older and more experienced, and they’ve learned from another coach and from the rest of the team. They’re even better than before.” Derraugh gives a lot of credit to his assistant coaches—Danielle Bilodeau ’01 and Edith Racine, who have a combined fifteen years with the program—for spurring the team’s renaissance. “We’ve had the same staff for a number of years, which you don’t see very often,” he says. “That helps the cohesiveness of the program.”

Saulnier, who shared Ivy League Player of the Year honors, led this year’s Big Red squad in scoring with 28 goals and 28 assists. She was a top-three finalist for the Patty Kazmaier Award for most outstanding player in the nation and was named first-team All-American by the American Hockey Coaches Association. (Senior defenseman Alyssa Gagliardi earned second-team honors.) “The program has taken a full 180,” Saulnier says. “It’s been developed by some tremendous players, and I’m so fortunate to be able to play with them. I’m looking forward to continuing that success—and, obviously, getting some big wins.” 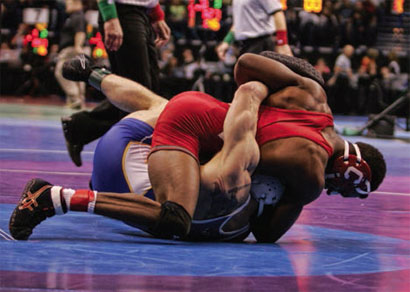 GREAT GRAPPLERS Paced by a second place from Nahshon Garrett ’16 and two other top-eight finishes, the wrestling team placed in the top 10 at the NCAA Division I championships for the seventh straight season. Garrett was seeded number two at 125 pounds, losing in the final to top-seeded Jesse Delgado of Illinois, 3-2. Gabe Dean ’16 earned All-American honors with a third-place finish at 184, while Brian Realbuto ’16 finished sixth at 157. The Big Red also claimed their eighth consecutive Eastern Intercollegiate Wrestling Association championships behind individual titles by Garrett, Dean, Chris Villalonga ’14, and Jace Bennett ’14.

TEAM LEADER Matt Smith, associate head coach for heavyweight rowing, will serve as head coach for the USRowing Under 23 men’s national team for 2014. The team will compete at the World Rowing Under 23 championships in Varese, Italy, on July 23–27. Smith has been an assistant coach at Cornell since 2008.

TURNING PRO Less than a week after closing his record-setting career at Cornell, goaltender Andy Iles ’14 collected a win in his professional debut, leading the Florida Everblades past the Evansville IceMen on March 27. Iles, who set a Big Red career record with 2,988 saves in 117 games, was named the ECAC Men’s Hockey Student-Athlete of the Year, honoring his success on the ice, where he was second team all-league, and the classroom, where he posted a 3.82 GPA in finance and marketing.

OUTSTANDING OARSMEN Three Cornell rowers finished in the top seven of the men’s lightweight division at the 2014 world indoor championships, where competitors rowed 2,000 meters on an ergometer. Will Oprea ’16 was second overall and first in the Under 23 classification with a time of 6:15.9. Nigel Harriman ’16 was sixth overall and second in the Under 23 division with a time of 6:20.1, followed by Cameron Schultz ’16, who was seventh overall and third in Under 23.

WORLD CLASS Trekking from New Hampshire to Poland to New Mexico over a two-week period, Stephen Mozia ’15 continued to reach new heights in the shot put. During the Indoor Heptagonals at Dartmouth, he set a league and meet record with a throw of 20.79 meters (68 feet, 2.5 inches). Five days later, he placed 17th while competing for Nigeria in the IAAF World Indoor Track and Field Championships with a toss of 18.91 meters (62 feet 0.5 inches). He returned to the U.S. to take second at the NCAA Championships, where he was one of only two throwers to surpass 20 meters. 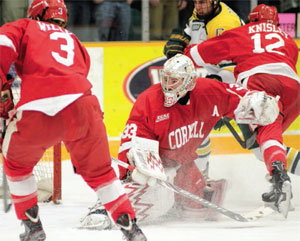 TWO IN A ROW The men’s track and field team won the Heptagonal Indoor Championships for the second straight season and the seventh time in 12 years. Bruno Hortelano-Roig ’13 was named the most valuable track performer after becoming the first runner to win both the 60 and 400 meters in the same season. He also set an Ivy League record in the 60 with a time of 6.69 in the prelims. Other Cornell winners were Max Hairston ’16 in the 60-meter hurdles, Will Weinlandt ’14 in the 800 meters, Stephen Mozia ’15 in the shot put, Montez Blair ’14 in the high jump, and Bryan Rhodes ’16 in the weight throw.

COMEBACK After a disappointing fifth-place finish at the Heps, the women’s track and field team rallied to finish second at the ECAC Indoor Championships in Boston. The Big Red came home with two titles, as Emily Shearer ’14 took the 3,000 meters in a school record 9:11.68 and the 4×400 relay team of Zena Kolliesuah ’15, Ebolutalese Airewele ’14, Elyse Wilkinson ’15, and Udeme Akpaete ’16 set an Ivy League record of 3:36.63.

RECOGNITION Hockey great Joe Nieuwen­dyk ’88 had his Cornell number 25 jersey retired in 2010, and now the NHL’s Calgary Flames have raised his number to the rafters. Nieuwendyk was the second player honored by the team’s “Forever a Flame” program, which recognizes its all-time greats while still allowing younger players to wear their numbers. Nieuwendyk won the first of his three Stanley Cups with the Flames in 1989, scoring 51 goals in the regular season and 10 more in the playoffs.

HIGH OFFICE The NBA’s second-highest-ranking executive is now Mark Tatum ’91, who was named deputy commissioner and chief operating officer on February 1. He was appointed by his predecessor, Adam Silver, who became commissioner upon the retirement of Larry Stern after 30 years in the top position. Tatum has served in NBA business operations for the past 15 years and was most recently the league’s executive vice president for global marketing partnerships.