Amid malls and subdivisions lurks the elusive coyote

Amid malls and subdivisions lurks the elusive coyote 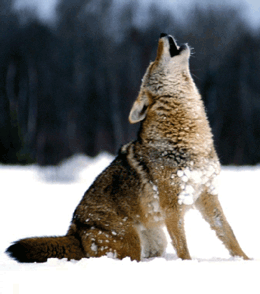 The first time Dan Bogan spotted a coyote on the loose, the rangy German shepherd look-alike was padding its way through a suburban Chicago forest preserve. "It was slowly and lackadaisically stalking a cat," recalls the natural resources grad student, who was working as a wildlife technician at the time. "The cat detected it, raced to the tree line, and escaped." The coyote continued on, likely in search of the same small rodents that had attracted its feline quarry. Bogan keeps pet cats at home, but admits that on this occasion he didn't take sides. "The coyotes have to eat, too," he says. "I was just waiting to see how it would turn out."

During the nineteenth century, Canis latrans resided solely in the relatively unpopulated American west—much like Warner Brothers' hapless antihero Wile E. Coyote. But by the mid-twentieth century, as the Road Runner's animated nemesis schemed his way through Arizona, New Mexico, and Texas, the cartoon's real-life inspiration had undertaken a massive range expansion, migrating east and north. Unlike its larger cousin the wolf, extirpated as human development encroached, the adaptable coyote—which dines on rodents, birds, invertebrates, carrion, fruits, berries, garbage, and the occasional pet—thrives in highly industrialized settings. Today, coyotes reside in every state except Hawaii. Sightings are common in the most upscale neighborhoods of suburban Atlanta, Boston, and Los Angeles, at Chicago's O'Hare airport, even in a TriBeCa parking garage in lower Manhattan.

New York's population—a stocky subspecies descended from southwestern coyotes and Canadian wolves—inhabits every county except Nassau and Suffolk, on Long Island. For the last five years, Bogan's doctoral research has focused on the question of what the coyotes of Westchester County eat—as well as a larger analysis of their biology, behavior, and ecology in the densely populated area a few train stops north of Manhattan. In the process, he has worked with hundreds of landowners to live-trap and radio-collar forty-one of the elusive animals and hiked nearly 500 miles through parks, along utility lines, and on private land to collect scat for diet analyses. "That's a lot of miles to walk for poop," says Bogan, who found that while Westchester coyotes rarely dine on human food sources (they eat primarily white-tail deer and rodents), he did find the occasional cigarette filter or tennis ball fuzz in the animals' waste.

In addition to Bogan's work, the project—which ended this spring—also documented interactions among coyotes and humans and assessed attitudes toward the creatures. "Our goal was reducing potential conflicts," says Curtis, whose expertise includes a variety of vexing animal-human interactions—from the voles that plague gardeners to Canada geese on golf courses and the white-tail deer that hunting-averse communities attempt to control via sterilization. In the two years leading up to the coyote study's launch, complaints about the canines had spiked, prompting the DEC to seek out data to inform management plans throughout the Northeast.

Working with co-principal investigator Dan Decker '74, PhD '86, co-leader of the Department of Natural Resources' Human Dimensions Research Unit, grad student Heather Wieczorek Hudenko, MS '08, tackled the human side of the equation, surveying Westchester residents about their attitudes and experiences and assessing strategies for wildlife experts to collect reliable information. "One of the things we're dealing with in the Northeast is the relative newness of the coyote population," she says. "In the Southwest, there's a higher proportion of human-related food in coyote diet and more conflict." The animals aren't going away, says the Michigan native, who previously studied the wolves of Minnesota. Attempts to eradicate coyotes in the Southwest backfired: the animals' average litter size and frequency of breeding increased. "It's a species we're simply not going to get rid of," she says. "Especially with trends of exurban development, we'll keep pushing closer and closer."

Those trends make coexistence all the more important, says Curtis, who notes that negative interactions between humans and coyotes are relatively rare. While nearly a million Americans each year suffer dog bites serious enough to require medical attention, people tend to have more anxiety about the prospect of encountering a coyote, and the rare incidents make a disproportionate splash in the local news. Bogan was originally slated to test ways to address problem behavior among coyotes—but that facet of the study was scrapped when, during four years of data collection, just one of the forty-one animals he tracked caused trouble. Even so, "the occasional clashes can be tragic and unfortunate," says Curtis.

Feeding coyotes—whether on purpose or inadvertently by leaving out pet food or garbage—only exacerbates the situation. "People have to treat these animals with respect," says the professor, who notes that conflicts spike in January, when mate-seeking coyotes become more territorial, and in early summer as people and their dogs head out into nature and adult coyotes defend their pups. "If the animal starts to become too comfortable in suburban areas, you have to enforce that humans are the predators—shout, throw sticks, and wave your arms, and they'll get the message that they don't belong."