It’s been a quarter-century since Enongo Lumumba-Kasongo ’08, MA ’15, first played through to the end of the classic Nintendo game “Metroid” at the age of six or seven, but she’ll never forget its thrilling finale. It wasn’t just the satisfaction of completing a quest as futuristic bounty hunter Samus Aran, the game’s protagonist—it was the eye-popping realization, when Samus’s armor dropped away, that this powerful hero was actually a heroine. “That was really exciting,” she recalls. “At that time, there weren’t many playable women characters, so it made me feel like I had a space in that world—that I was allowed to inhabit it, too. It really resonated with me.” 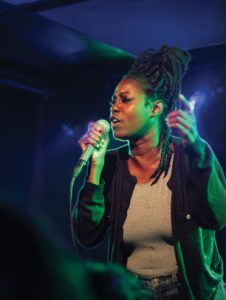 Years later, when Lumumba-Kasongo was crafting her persona as a rapper—and sometimes encountering male listeners who were skeptical that she’d actually composed the songs herself (known as “producing her own beats”)—she quickly landed on her favorite Nintendo character as the perfect alter ego. “I picked the name Sammus not only because I love that game,” she says, “but because to me, she represents pushing back against gender norms.” (Lumumba-Kasongo spells her stage name with a second “M” because, as she delicately puts it, “Nintendo is very intense about their intellectual property, and I wanted to make sure there was that distinction.”)

Since releasing her debut album, M’other Brain, in 2012, Lumumba-Kasongo has enjoyed growing success in the music world. But her performing career is only half of her résumé: she’s also a doctoral candidate in science and technology studies (STS) on the Hill, with a concentration in the new field of “sound studies,” which explores how sound is produced, stored, and listened to in various cultures and historical periods. Based in Philadelphia—which she and her partner chose for its vibrant arts scene and many academic institutions—she has completed her coursework and is in the process of writing her dissertation, on community-based recording studios that serve low-income residents, while supporting herself as a full-time musician. “She’s brilliant,” says her adviser, STS professor Trevor Pinch, who notes that her PhD will be among the first ever granted in sound studies. “She’s very independent, curious, and inquisitive. And she’s gifted as a musician; she makes her own beats, so she’s her own producer. When she raps live, she relates to the audience really well—she’s got a natural rapport and an incredible personality.”

As an artist, Sammus is often placed in the context of “nerdcore,” a subgenre of hip-hop that takes its inspiration from gaming, science fiction, comics, and other traditionally nerdy pursuits. But Lumumba-Kasongo stresses that her work—which she describes as “the intersection of black feminist thought and geek culture”—encompasses wider themes, from sexism to racism to identity politics. “As I’ve moved forward and been able to perform in more spaces, I’m seeing the ways in which music cuts across identities,” she observes. “People, who on the outside I might think I have nothing in common with, will come up to me after a show, ask if they can give me a hug, and say they connected with something I talked about. Even if that thing came from my specific experience as a black woman, they’ll say, ‘I know what it’s like to be isolated,’ or ‘I know what it’s like to deal with imposter syndrome,’ or ‘I know what it’s like to struggle with depression.’ ” 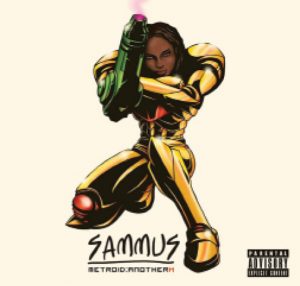 In fall 2016, NPR featured Sammus’s “Weirdo” as one of its “Songs We Love,” calling it “something to learn from, a celebration of nerddom and self.” (Its catchy chorus: Yeah, I’m just another mad weirdo / Ergo / I came up with a chant for other mad weird folks’ earphones / Here it go.) Her 2014 “Metroid”-focused concept album, Another M, includes an homage to her longtime idol, a fellow Cornellian: retired astronaut Mae Jemison, MD ’81, the first African American woman in space. Among her most intensely personal songs is “1080p,” which chronicles her struggles with depression and thoughts of suicide when she was in grad school and coping with a romantic breakup. (I never feel like I’m allowed to breathe / Rubbing shoulders with these old nerds / Rockin’ sweater vests in they office hours / Eatin’ hors d’oeuvres while I soul search / Tryna make some sense of the ivory tower.)

A double major in sociology and STS as an undergrad, Lumumba-Kasongo grew up in Ithaca, a first-generation American and the daughter of academics. Her mother, N’Dri Assié-Lumumba, was born in Ivory Coast and is a professor of Africana studies on the Hill; her father, Tukumbi Lumumba-Kasongo, who comes from the Democratic Republic of Congo, teaches political science at Wells College and has previously served as a visiting professor of city and regional planning at Cornell. Among the themes she addresses in her music is what it was like to grow up black in a predominantly white small town. “For me, that comes out in talking about never being fully understood and being framed as sort of a unicorn,” she says. “People would say, ‘Wow, you speak so eloquently,’ or ‘You like to do things that don’t reflect the experiences that I think black folks have, based on things I saw on TV or in the movies.’ That produced in me a kind of confusion around whether I was doing something weird just by being myself, or that I wasn’t black enough. I had all kinds of identity issues around that. In my music, I try to affirm folks who might be in a similar position and say, ‘Your interests are perfectly fine—no matter what they are.’ ”

In addition to the NPR spot, Lumumba-Kasongo has been featured in the New York Times (last fall, as part of its “Up Next” series on emerging artists). Since 2015, she has made an annual appearance at the popular South by Southwest music festival, held each spring in Austin, Texas. She spends a total of about two months a year on tour—to places like California, the Midwest, and Canada—in addition to performing in East Coast cities near her home in Philly. Her aims for 2018: to finish writing her dissertation this summer and complete another album—her sixth—later in the year. Ultimately, she says, she’d like to complement her music career with scholarly work through artist-in-residence posts at the university level. “Enongo is a pioneer,” says Pinch. “She’s pushing boundaries everywhere—not only as a rapper, but in her academic career. That’s what’s so exciting about her.”