Here on the third floor of the Writers Guild of America Building in downtown Los Angeles, the hors d'oeuvres have been sampled. Introductions have been made, connections reestablished. Now it's time to get down to business—a panel discussion with a Tinseltown title: "How to Break and Enter in Hollywood (Without Getting Arrested)." Moderator Howard Rodman '71, a screen-writer, novelist, and professor at the USC School of Cinematic Arts, starts the conversation. "This is a panel," he says, "about minimizing the ramen years." 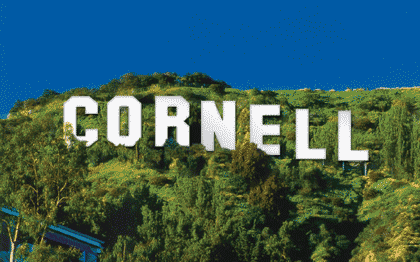 Rodman introduces the four men sitting alongside him—Jack Farrell '84, Brian Dreyfuss '91, Will Gluck '93, and Bill Langworthy '97—who have various writing, producing, directing, editing, and/or agenting credits. Then he suggests there are two theories of how to start out in Hollywood: either take the worst job at the best place or "do something that has nothing to do with the entertainment industry, so you can maintain the purity of your vision."

For the next ninety minutes, the panelists offer assessments of this notion and candid answers to questions. They discuss the ratio of acceptance versus rejection in Hollywood, the necessity (or not) of film school, how to sell yourself, and how to become an expert without getting pigeonholed. For the two dozen interns and several dozen alumni in attendance, it's Hollywood 101.

The Cornell in Hollywood program, which premiered in December 2006, is not so much a spin-off or a sequel as a re-imagination. For many years, the Cornell Club of Los Angeles (CCLA) has been holding events catering to alumni in the film and TV industries. But then freelance entertainment journalist Nancy Mills '64 and engineer-turned-producer Nick Muccini '87 hatched a more ambitious plan. Why not add a career development component to the mix, to help alumni and current students who want to work in Hollywood but have no connections to the industry?

"It's such a specific niche, and there are a lot of people trying to get in, but there are no easy ways to do that," says Muccini, who (with Jim Tavares '92) created the Cornell Alumni Short Film Festival to showcase films by Cornellians and now runs his own production company. Mills and Muccini assembled a board of advisers consisting of industry professionals like Ron Moore '86, a veteran of "Star Trek" and most recently a writer-producer of "Battlestar Galactica," and Gaye Hirsch '84, senior vice president of current programming at the CW network. Actor David Greenman '00 and writer-producer Drew Brody '94 were tapped to helm a summer internship program. Cornell in Hollywood has collected nearly 800 e-mail addresses of local alumni for its database, with an eye toward increasing contact with Cornellians in the entertainment industry beyond Southern California.

Cornell in Hollywood is one of nine similar clubs (including Harvardwood and Yale in Hollywood) that comprise Ivy Entertainment, a networking organization that often hosts larger events of its own. "One of the great skill sets, and one of the predictors of success out here, is being able to develop relationships and get your projects moving forward without turning people off," says Brody, who has written and produced several plays as well as a straight-to-DVD feature, Desert of Blood. "It's about meeting people, but where do you begin? If you're all Cornell alums, that's a great place to start."

The "How to Break In" panel discussion was one of more than a dozen events that the interns could attend last summer— including film screenings, roundtable seminars with industry professionals, and the occasional picnic or L.A. Dodgers game. There were seven interns in summer 2007, but a Cornell Alumni Federation grant aided expansion of the program in 2008. Seventy-five hopefuls applied, and twenty-eight were accepted to positions at management, film production, and Internet video companies, most run by Cornellians. "It's a win-win situation," says Brody. "We get them the smartest interns in town."

Star Li '10, an applied economics and management major in the Ag college, interned at SpiritClips, a company founded by Rob Fried '81 that offers inspirational short films available for online streaming. Although she is a member of the Cornell Film Club, she arrived at the company's Pasadena offices with no moviemaking experience, few industry contacts, and a fear that her dream career was impossible. But at SpiritClips, she edited the short films and assisted with research. "It opened my eyes to what creating a movie would actually be like," says Li, who says she benefited most from the program's networking opportunities. "It wasn't just the internship. It was the fact that I took the initiative and made an effort to stay in touch with everyone. Now I realize that this is something I can do."