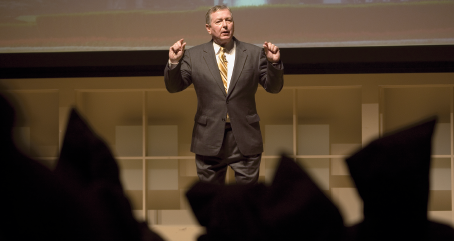 FORMER U.S. ATTORNEY GENERAL JOHN ASHCROFT GAVE A talk on national security in late November in which he roundly defended the Patriot Act—but its most memorable moment came from the audience. About fifteen minutes into his speech, a group of students and community members rose from their seats in Statler Auditorium, donned black hoods, and turned their backs to the stage in protest of the Bush Administration's treatment of Arab Americans. The protesters—estimates of their numbers varied between fifty and more than a hundred—stood silently for another quarter-hour, blocking the view for some audience members, before walking out en masse. "Good," Ashcroft said in response to their exit, to applause from supporters. An editorial in the Ithaca Journal condemned the stunt, saying it "has more in common with an elementary school playground than a university forum."

IN NOVEMBER, THE DAILY SUN REPORTED THAT THE UNI-versity paid former Cornell President Jeffrey Lehman '77 $785,518 for the fiscal year that ended on June 30, 2006. He received base compensation of $763,469 plus benefits of $22,049. For the same period, Interim President Hunter Rawlings received total compensation of $709,932. The figures were obtained from the IRS Form 990 filed by the University, which is a matter of public record. In 2003-04, his first year as president, Lehman earned $675,027. For the following year, which ended with his resignation, his total compensation was $1,004,034. University spokesperson Simeon Moss '73 told the Daily Sun that Lehman's 2005-06 compensation was "part of his employment contract with the University" and noted that the former president held the position of professor of law during that fiscal year. The only alumnus ever to serve as Cornell's president, Lehman was in office from 2003 to 2005.

WOMEN FACULTY ARE GENERALLY LESS SATISFIED WITH their jobs than their male counterparts are—mostly because they feel alienated from the University community. According to a report from the CU-ADVANCE Center released in December, female professors are more likely to feel unhappy with opportunities to collaborate, stressed by internal politics, ignored in their departments, and unable to navigate the unwritten rules of faculty life. They were also more likely to have considered leaving Cornell for a more supportive work environment. However, male and female faculty were equally satisfied with rank and salary. "These are measures that really get at the social and psychological experience people are having in their departments at Cornell," says sociology professor Shelley Correll, ADVANCE's co-principal investigator.

Women fill just 10 percent of full professor positions in the sciences, engineering, and math, and 23 percent in the social and behavioral sciences. The center, which aims to increase the traditionally low number of women in those fields, is funded by the National Science Foundation. Its 2006-07 annual report drew on data from a 2005 Faculty Work-Life Survey and from the Office of Institutional Research and Planning.

CORNELL IS DOING MORE TO OPERATE SUSTAINABLY THAN it did last year—but it could do better, according to a report card from the Sustainable Endowments Institute. The University earned an overall grade of B, up from last year's B-, thanks to its efforts in the categories of climate change and energy and green building. They included Lake Source Cooling, the Combined Heat and Power project, and green housing on West Campus. The institute rated 200 universities in eight categories, from transportation to recycling. More than two-thirds earned higher grades, especially in endowment transparency, investment priorities, and shareholder engagement.

HIS RELATIONSHIP WITH CORNELL BEGAN WHEN HE ENROLLED as a freshman in 1937 and continued for seven decades—sometimes thorny, but always passionate. During his three terms as mayor of Ithaca, electrical and computer engineering professor Ben Nichols was one of the few members of the Democratic Socialists of America to hold public office. He passed away in November from complications of lymphoma and leukemia.

A "red diaper baby" born to Communist Party members on Staten Island, Nichols interrupted his undergraduate education for service in World War II; he earned his BEE in 1946 and his MEE in 1949. (His PhD came from the University of Alaska.) He became a full professor at Cornell in 1959 and retired with emeritus status in 1988.

Nichols served as Ithaca's mayor from 1989 to 1995, making national headlines with the passage of a domestic partnership law that granted equal benefits to gay and lesbian couples. He also convinced the University to make significant financial contributions to city coffers in lieu of taxes—occasionally using the issuance of building permits as leverage. He remained politically active after he left office, including protests in 2005 against Cornell's razing of Redbud Woods for a parking lot; he was ticketed for trespassing during a sit-in. "Cornell and Ithaca are intertwined," Nichols said when he was first serving on the city's Common Council in the late Eighties. "It goes without saying that Ithaca wouldn't be anything like it is without Cornell. Cornell as an institution does not feel quite the same way about Ithaca."