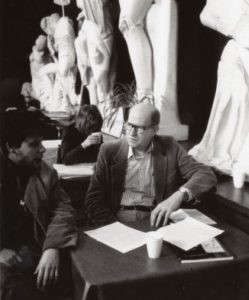 The late A.R. Ammons (right) with a student at the old Temple of Zeus cafe in Goldwin Smith, likely in the Eighties.Cornell Rare and Manuscript Collection

Like generations of Cornell writers, I sat in the light of speech with poet and longtime English professor Archie Ammons morning after morning over coffee in the Temple of Zeus—first in the grand cavern that the café occupied on the left side of the Goldwin Smith lobby, later in the more modern but much diminished setting on the right, to which it was shifted in 1997. All of us who gathered with him there, a group that included fellow poets Phyllis Janowitz and Roald Hoffmann (who moonlighted as a Nobel-Prize-winning chemist), worried about how the move would affect Archie, whose verse was wildly adventurous, but whose daily habits made the word “routine” seem inadequate. We tried to cheer him up by surreptitiously scattering dimes on the floor—Archie, who had grown up on a North Carolina farm during the Depression, was never happier than when he discovered lost change—and by showing up as early as we could each day. He was always there first.

Archie—known to the world of letters as A.R. Ammons, two-time winner of the National Book Award and one of the first MacArthur “genius” grant recipients—was always there first with his writing, too. The full scope of his literary innovation is on display in The Complete Poems of A.R. Ammons, published in December by W.W. Norton & Company. Over the course of two volumes—more than 2,000 pages and nearly 1,000 poems—readers can trace the evolution of his work from early efforts to bridge the philosophical and colloquial in his first collection, Ommateum with Doxology (1955), to the sprawling book-length poems for which he may be best known: Tape for the Turn of the Year (1965), Sphere: The Form of a Motion (1974), Garbage (1993), and Glare (1997). As critic Helen Vendler writes in her sweeping introduction: “A voice of the rural South, modified by scientific modernity, observant and sardonic, he sounds like nobody else, his idiosyncrasy inimitable.”

For those Cornellians like myself who knew Archie, The Complete Poems is also an opportunity to sit down again with a friend who was “addicted to conversation,” as Cornell English professor Roger Gilbert observed in the New York Times obituary when Archie died in 2001 (Roger is currently working on a critical biography of him). I find one of my morning talks with Archie captured on page 646 of the second volume, in section 99 of Glare:

I asked C.A. what she thought about, no, what
she believed in: she said, etiquette: that’s
like good conduct and not necessarily some
stilted ceremonialism . . .

He goes on to political musings—“but / if we could get everybody in the world mannerly / we wouldn’t even need defense, so what would be / the use of collecting taxes, just idle money…”—that frustrated me at the time and frustrate me still. Archie was no respecter of sensibility in his work or his conversation, and there was more than one occasion when I walked out of Zeus in exasperation, only to return when a contrite note showed up in my English department mailbox. Over the years, many readers of his work have experienced something similar as they try to follow along with his playful experimentation in form, his freewheeling careens from the metaphorical to the mundane. In her introduction, Vendler describes her “bewilderment” at some of the turns his writing took, but she—like so many of Archie’s fans and friends—always came back.

By the time I was joining Archie for coffee in the Temple of Zeus, first as an undergraduate and then as one of the last, lucky MFA candidates to study with him before his retirement in 1998, he had been a member of the Cornell faculty for more than thirty years. It was an unlikely landing for a boy who grew up the son of Baptist farmers in a home with only three books and not much else. Archie recalled that childhood in one of his best-known and best-loved poems, “Easter Morning,” set partly in the family graveyard.

when I go back to my home country in these
fresh far-away days, it’s convenient to visit
everybody, aunts and uncles, those who used to say,
look how he’s shooting up, and the
trinket aunts who always had a little
something in their pocketbooks, cinnamon bark
or a penny or nickel, and uncles who
were the rumored fathers of cousins
who whispered of them as of great, if
troubled presences, and school
teachers, just about everybody older
(and some younger) collected in one place
waiting, particularly, but not for
me . . . 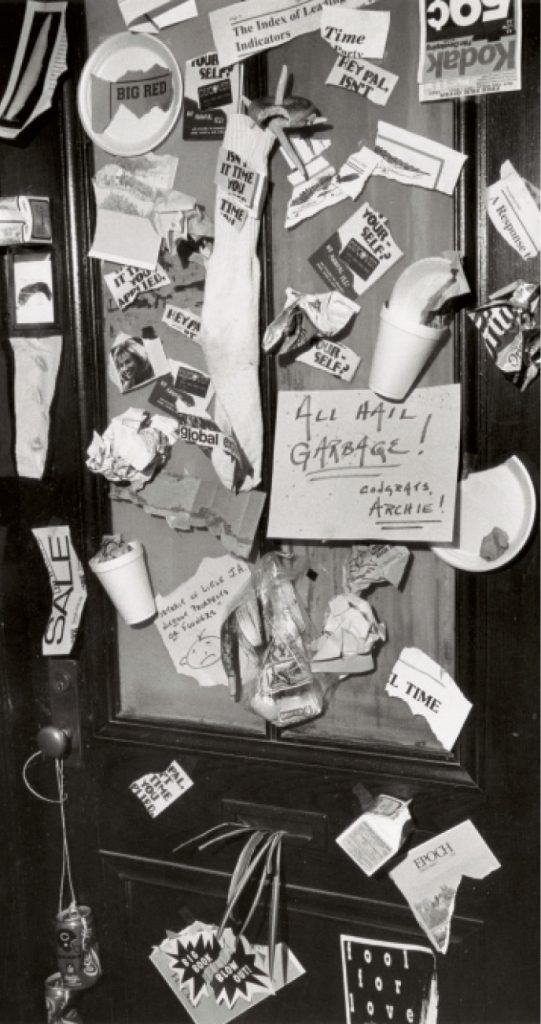 Ammons’s office door in Goldwin Smith, decorated by students to celebrate his National Book Award for Garbage in 1993.Cornell Rare and Manuscript Collections

It was one of those teachers who got Archie hooked on writing. After high school, he worked in a shipyard and enlisted in the Navy during World War II; he kept a journal and studied vocabulary during night watches. The G.I. Bill got him to Wake Forest University, where he fell in love with his Spanish teacher, Phyllis Plumbo. They married after graduation, and he worked as an elementary school principal before joining his father-in-law’s scientific glassware business. In his spare time, though, he was writing the poems that would appear in his first two books, Ommateum with Doxology and Expressions of Sea Level (1964). The latter’s publication led to a job offer at Cornell. Over the years that followed, between coffee klatches in Zeus and his famous long walks around Ithaca that served as research expeditions for the nature imagery in so many of his poems, Archie kept on writing, kept on earning national awards and recognition from powerhouse critics like Vendler and Harold Bloom ’51. (Bloom—who devoted a volume of his “Modern Critical Views” series to Archie—wrote in a 1975 journal article, “No contemporary poet in America is likelier to become a classic than A.R. Ammons.”)

Yet even when I knew him, he still seemed to think of himself as an outsider—the poor farm boy who never stopped being surprised to find himself a successful and celebrated poet. When he was clearing out his office in Goldwin Smith, Archie gave me his little 1933 pocket edition of Robert Herrick (a seventeenth-century poet who, in his good-humored embrace of the profane, seems a likely forebear for Archie’s most colloquial moments), and I only discovered afterwards that at some early point in his career, he had used the flyleaf to practice different ways of signing “A.R. Ammons.” Even in his final years, Archie seemed to be trying on the persona of A.R.—bringing typed drafts of his poems to share over coffee, fretting about upcoming readings and award ceremonies, worrying aloud about whether appreciation of his work would endure.

It has endured, as demonstrated by the enthusiastic reception of The Complete Poems. A review by Dwight Garner in the New York Times celebrated it as: “a rocking double-wide mobile home of electric American verse . . . Ammons carries you along because as he vamps, like a musician, there’s a sense of drama, of his mind expanding and contracting. He will hit his groove and deliver a string of intensities. Then he will pull back because the beauty is too much; he’ll wait for the next moment to strike.” In a New Yorker review, Dan Chiasson—commenting on Tape for the Turn of the Year, which Archie wrote on adding machine tape, a process that enforced limits to line length and demanded relentless forward momentum, since he couldn’t scroll back and rewrite—said: “Few poets have captured so movingly the experience of living in time, or thought so lucidly, with the clock running, about how poems bargain against its passing.”

Cornell continues to celebrate Archie, too. Zeus is home to a plaque honoring him; the English department is mounting a display in the corridor where his office once stood (possibly complete with its original door); and some of his manuscripts—including that roll of adding machine tape—will be digitized. I’m grateful, though, to have a monument to his work on my own bookshelf, in the form of these two imposing volumes. And I’m thrilled to find that The Complete Poems includes the contents of a rare little 1999 chapbook (whose delightfully vulgar title is unsuitable for the pages of this magazine), which includes one of the short poems—entitled “Getting It on Straight”—that sounds, to me, most like my friend:

I said to
myself when I
was a boy,

Archie, I said,
nobody’s
going to

care about you,
freckle face,
not for

yourself alone
(or your
red hair)

you better
learn to do
something

nobody’s proved
interested in
me yet for myself alone

but I was wrong
one way or the
other

about the other:
nobody cares
what I do, either.

Share your memories of Archie, or the impact his poems had on you, in the Comments section below.

That self-deprecation, both sincere and sly, begs for protest. And the fact that this slip of a poem has been collected at all is the proof that we did care, and we do.

2 thoughts on “The Complete Archie”