In September 2016, during their 50th Reunion celebration, members of the Medical College’s Class of ’66 gathered in the very auditorium on Manhattan’s Upper East Side where they’d been welcomed on their first day of school. The occasion: an appearance by their class’s most prominent alum, Anthony Fauci, MD ’66, the longtime head of the NIH’s National Institute of Allergy and Infectious Diseases (NIAID) and one of the most famous doctors in America.

In a conversation with New Yorker writer Michael Specter—who’d been covering Fauci for decades, since the early days of the HIV/AIDS epidemic in the Eighties—the affable and self-effacing physician discussed a wide range of topics, from how his Cornell training influenced his career to his recent struggle to get funding for research on the Zika virus. But one of the most memorable moments came when Specter asked Fauci—who by then had served during five presidential administrations and through a host of public health crises—how he coped with the vicissitudes of politics. “What I’ve learned to do over the years is go to my favorite book of philosophy, The Godfather,” Fauci said to a chorus of laughter, “and say, ‘It’s nothing personal; it’s strictly business.’ And that’s [how] I really look at it: you just have a job to do. . . . Even when somebody’s acting ridiculous, you can’t chide them for it. You’ve got to deal with them. Because if you don’t deal with them, then you’re out of the picture.” 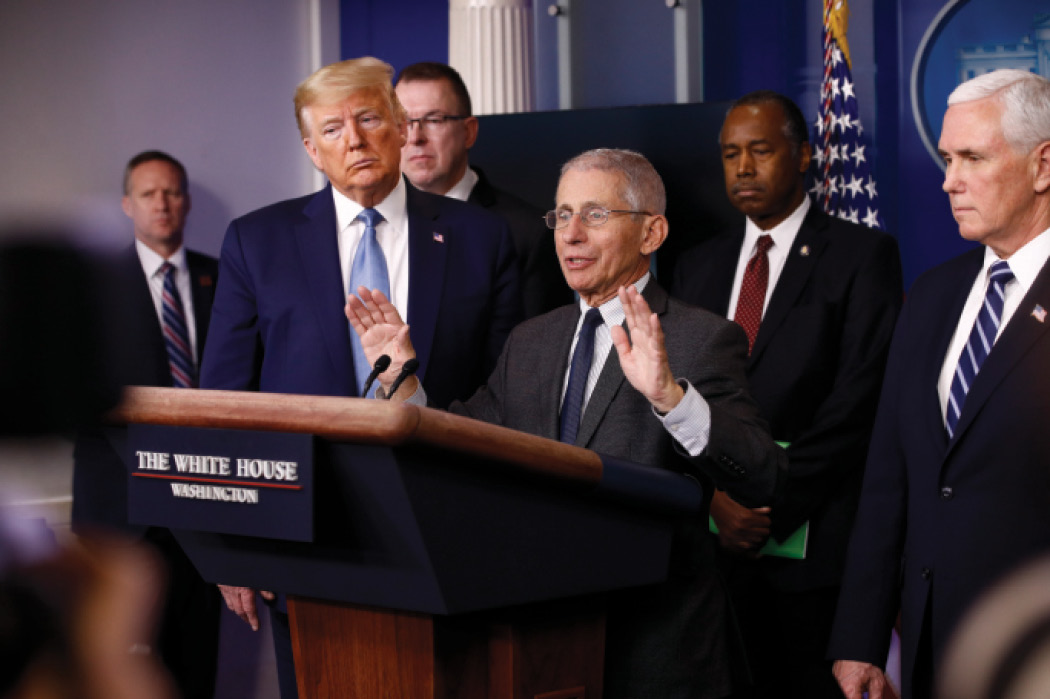 Fauci speaks at a coronavirus task force briefing at the White House in March.Patrick Semansky/AP

Of course, the audience viewing the conversation nearly four years ago—and, arguably, Fauci himself—could have had no way of knowing just how dramatically politics and medicine would intersect during America’s next major public health crisis. Since COVID-19 emerged in the U.S. earlier this year, Fauci has become a ubiquitous presence, the face of the federal government’s scientific response to the pandemic. And ironically, a physician-scientist who has long eschewed partisanship—“You stay completely apolitical and non-ideological, and you stick to what it is that you do,” he’d told the Reunion audience—has also become a polarizing figure. As the nation itself has grown more sharply divided along partisan lines during the administration of President Donald Trump, Fauci has become a darling to some and a lightning rod to others.

In early April, the Justice Department announced that Fauci’s security detail had been stepped up following threats on his life. He has become a source of outrage to aggrieved Americans who believe the COVID-19 threat has been overblown and that the ensuing economic hardship has been for nothing; some even see the pandemic as a left-wing tool to manipulate the public or influence the upcoming presidential election. On the opposite end of the spectrum, for those who embrace Fauci’s message of science-based caution—one he often delivers with a voice raw from overuse—he has become a folk hero on par with another legendary Cornellian: Supreme Court Justice Ruth Bader Ginsberg ’54, a.k.a. the “Notorious RBG.” T-shirts and coffee mugs bear Fauci’s likeness along with catchy slogans (“Keep Calm and Wash Your Hands”; “In Fauci We Trust”); the National Bobblehead Hall of Fame and Museum made him into a figurine. In perhaps the ultimate tribute, he was portrayed by Brad Pitt—a past People magazine Sexiest Man Alive, no less—in a “Saturday Night Live” segment in late April, after Fauci had joked that the movie star was the obvious person to play him. It ended with Pitt doffing his wig and glasses and sending Fauci a heartfelt message: “Thank you for your calm and your clarity in this unnerving time.”

POP CULTURE ICON (from left): Fauci as a bobblehead; celebrated on a T-shirt and a coffee mug; and portrayed by Brad Pitt on “SNL”Provided

Fauci—who will turn eighty this coming Christmas Eve—is an infamous workaholic; it’s long been his habit to rise at 5 a.m., go for a brisk run at lunch, and work seven days a week (though from home on Sundays, at least in pre-COVID times). He’s also an unapologetic perfectionist. “I hold myself to a high standard, and sometimes it gets uncomfortable because you never get the feeling that you have done enough—but I have learned to live with that,” he told Weill Cornell Medicine magazine in 2008. “I think it pushes me to always try to do better.” This spring, the Medical College invited Fauci to give a video address to its graduates, who—rather than the traditional gala Commencement ceremony in Carnegie Hall—were fêted remotely, via Zoom. “We as a medical and public health community must face this pandemic together,” he told them. “All of us will be doing our part to overcome this challenge—not only as medical professionals but as individuals, as members of families, and as connected participants in society.”

The grandchild of Italian immigrants, Fauci grew up in Brooklyn; his father was a pharmacist, and the family lived in an apartment above their store. He attended an all-boys Jesuit high school (his subjects included Latin, Greek, and French, and he captained the basketball team) and went on to the College of the Holy Cross in Worcester, Massachusetts, where he studied classics and pre-med. As Specter noted in a recent New Yorker profile—headlined “How Anthony Fauci Became America’s Doctor”—during college Fauci had construction jobs over the summers, and he happened to be assigned to a crew building the Medical College’s new library; on a break, he snuck into a nearby auditorium and was awestruck at the prospect of being a student there. “After a few minutes at the doorway, a guard came and politely told me to leave, since my dirty boots were soiling the floor,” Fauci recalled at the med school’s centennial in 1998. “I looked at him and said proudly that I would be attending this institution a year from now. He laughed and said, ‘Right, kid, and next year I am going to be Police Commissioner.’ ”

Fauci graduated first in his class, then did his internship and residency in internal medicine at Cornell’s affiliated teaching hospital (then New York Hospital, now NewYork-Presbyterian). To fulfill his military obligation during the Vietnam War era, he joined the U.S. Public Health Service, landing a fellowship in infectious disease and immunology under Sheldon Wolff, an inflammation expert at the NIAID who would become Fauci’s mentor and close friend. “Never have so many bright young minds wanted to work in the same place at the same time,” the Wall Street Journal observed in a recent story on their relationship. “There was such a talent cluster in this generation of NIH researchers that Fauci arrived in the same year as four people who have since won Nobel Prizes.”

Except for a year Fauci spent back at New York Hospital to serve as its chief resident in medicine, he has been at the NIH ever since. While his first major achievement was pioneering a treatment for vasculitis—an inflammation of the blood vessels that was previously deadly—he came to national notice during the HIV/AIDS epidemic. As Fauci has recounted numerous times, his first inkling that a public health crisis was brewing came in summer 1981, when the Morbidity and Mortality Weekly Report noted five cases of pneumocystis pneumonia (a disease generally found in people with compromised immune systems) among gay men in L.A.; a month later there were more than twenty additional cases, not only of pneumocystis but also of a rare cancer called Kaposi’s sarcoma, which would later become an AIDS-defining illness. “I had no idea what was going on after the first report,” Fauci said in the 2008 Weill Cornell Medicine interview, “but after the second I became anxious, realizing it was likely that we were dealing with a new disease.” Furthermore, he suspected that this novel threat had the potential to spread to a much wider population. “Twenty-six years later,” he said, “this has turned out to be one of the most devastating pandemics in the history of our civilization.”

Then, as now, Fauci was the public face of the government’s response to a new and deadly disease. And as with COVID, he drew some people’s ire; in that case, his detractors were activists demanding an overhaul of long-held treatment and research protocols in the face of a scourge that was devastating the gay community. As protests roiled the NIH and elsewhere, Fauci listened, empathized, and ultimately became an ally—even befriending one of his harshest critics, activist Larry Kramer, founder of the Gay Men’s Health Crisis and the AIDS Coalition to Unleash Power (ACT UP). As Fauci recalled to a New York Times reporter after Kramer’s death this past May: “How did I meet Larry? He called me a murderer and an incompetent idiot on the front page of the San Francisco Examiner magazine”—going on to say that theirs “was an extraordinary thirty-three-year relationship. We loved each other.”

Fauci, who still runs a lab and sees patients, has led the NIAID since 1984. He has been married since 1985 to Christine Grady, a nurse who holds a PhD in philosophy and is the chief of bioethics at the NIH, and they have three grown daughters. His many accomplishments include spearheading one of the largest public health efforts in history: the President’s Emergency Plan For AIDS Relief (PEPFAR), which was launched in 2003 during the George W. Bush administration and is credited with saving millions of lives by bringing affordable and accessible HIV/AIDS treatment to the developing world. As Fauci recalled in Weill Cornell Medicine, those efforts led to some unlikely adventures, including cruising around rural Uganda on a motorcycle (to evaluate the practicality of delivering drugs to patients in remote areas) and cooking dinner for U2’s Bono, who’d flown in on his private jet to discuss global health issues.

In the decades since HIV/AIDS emerged, Fauci has been involved in the federal response to every major outbreak and epidemic including SARS, MERS, H1N1 (swine flu), and Ebola. He has repeatedly been offered, and turned down, the directorship of the NIH—a post that, unlike his own, is presidentially appointed. He has received numerous awards and accolades over the years, including the nation’s highest civilian honor, the Presidential Medal of Freedom, which then-President Bush presented to him in a White House ceremony in 2008. And as it turns out, Bush wasn’t the first in his storied family to have admired the physician. As numerous news outlets have noted during Fauci’s current coronavirus fame, that president’s father, George H.W. Bush, was debating Michael Dukakis in October 1988 when he was asked to name someone who could inspire young Americans. “I think of Dr. Fauci,” Bush answered. “You’ve probably never heard of him.”