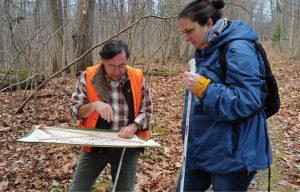 Forest entomologist Mark Whitmore has dedicated his career to saving New York State’s vast woodlands—as well as large swaths of Cornell’s campus and natural areas—from a voracious threat called the hemlock woolly adelgid. It’s a knotty name for an invasive insect species that’s destroying a veritable tree of life for forests in the eastern United States. “Hemlocks are absolutely crucial to woodland ecology,” says Whitmore, an extension associate based in CALS, who fell in love with the trees as a forester and wilderness firefighter in his home state of Washington. “They support a complex array of animal life, from fungi to nematodes to birds to trout.” 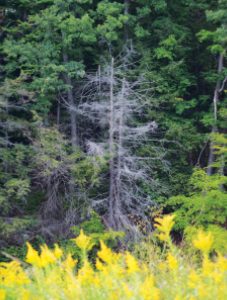 Hemlocks along Beebe Lake that have perished after being infested by an invasive beetle.Alexander Infante

A North American conifer with dark green needles, hemlocks are among the oldest and most abundant trees in New York, which has the most hemlocks of any state in the U.S. East Hill is home to untold numbers; in fact, the small gorge at the southeast end of Beebe Lake is named for them. While those that grow in the eastern and western parts of the country are different species, they’re similar in appearance and structure. There’s one major difference, though: western hemlocks can fend off the hemlock woolly adelgid (HWA)—a tiny sap-sucking aphid native to Asia—with help from natural predators like the silverfly, one of a handful of insects that consume them in Northwest forests, while the eastern trees are defenseless without human intervention.

When Whitmore arrived on campus in 1989, HWA was already established in Appalachia, ravaging forests in places like the Great Smoky Mountains National Park and advancing northward. In recent years, his colleague Todd Bittner, director of natural areas for Cornell Botanic Gardens, has undertaken an inventory of hemlocks on University lands, including central campus, finding that the trees proliferate in some 770 acres out of Cornell’s 3,600 acres of woodland. “The density of hemlocks in these areas can vary greatly,” Bittner explains. “From being one of several dominant trees in the upper canopy to being 100 percent of the forest canopy.”

The same is true across New York State, where Cornell is coordinating efforts to control HWA through the New York State Hemlock Initiative, a project that integrates research, management, and outreach activities. It encourages state residents—both property owners and nature lovers—to learn how to identify hemlocks and to report them to the initiative. “It’s just as important to report trees that are healthy as it is to add another one to our growing list of infested hemlocks,” Whitmore notes. “That kind of information is vital to our databases, and it supports our efforts to save them.” 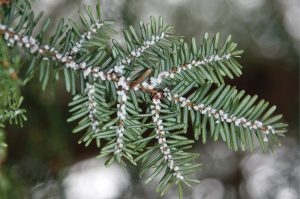 HWA was discovered roughly thirty years ago by state foresters in the Appalachians who were baffled by waxy wool egg masses at the base and undersides of new needles on hemlock twigs. The insect reproduces asexually—a single female can lay 200 eggs at a time—producing two overlapping generations per year; harsh winters can knock the population down, but survivors emerge hardier and more cold-resistant. As the adelgid sucks life-sustaining sap from the hemlocks, the trees weaken, their crowns become bare, and the normally dark green-blue foliage takes on a pale grayish hue. Hundreds of thousands of southeastern hemlocks have succumbed to the insatiable bug, leaving fifty- to eighty-foot-tall skeletons. Left untreated, an infested hemlock expires within ten years.

In 2009, with aid from a state grant to combat invasive species, Cornell began applying pesticides to nearly 2,600 hemlocks on campus, including in natural areas around Beebe Lake and in the Fall Creek and Cascadilla gorges. That may sound like a lot—but it represents just 2 to 5 percent of all hemlocks on University lands. “All of these trees would be dead if we hadn’t treated them,” says Bittner, adding that Cornell recently received additional funding to re-treat the hemlocks. Students are helping by marking trees with ribbons: yellow or silver for hemlocks and purple for ash trees, which are also endangered (see below). In some areas, laminated tags explain the threat, with the aim of not only identifying ash and hemlock trees, but serving notice of a looming ecological crisis.

For the time being, Cornell is only applying pesticides to hemlocks that are at least seventy-five feet away from water to minimize toxic runoff into streams. Steep, rocky gorge areas make the task particularly challenging, Bittner says, requiring “climbing and rappelling skills, as well as specialized safety gear similar to what mountain climbers use.” Cornell has also led efforts to treat infested hemlocks in several state parks, including nearby Taughannock and Watkins Glen, saving thousands of trees in these popular hiking and tourist areas. But limited resources mean that an immeasurable number of hemlocks across New York may not be saved.

A lab staffer putting a mesh bag on infested branches in the Catskills to release silverflies.Provided

While pesticides are currently the only way to combat HWA, Whitmore aims to find a solution that’s more sustainable—not only environmentally, but logistically and financially as well. In 2017, with a $1.2 million grant partly funded by the state Department of Environmental Conservation, his team established a lab in Morrison Hall that studies the feasibility of eradicating the insects by leveraging their natural enemies. This past summer, the researchers established the first-ever lab colony of silverflies, which help control HWA in western states; this fall, they released them in state parks and in natural areas on campus, and they’ll monitor the results. In a similar effort, the lab is also cultivating an adelgid-eating beetle it aims to establish in the wild.

As Whitmore and colleagues investigate these nontoxic pest-management methods, they’re also pursuing what he calls a potential “silver bullet.” For reasons that are not yet understood, a stand of hemlocks in New Jersey have so far resisted HWA. With help from colleagues at the University of Rhode Island, Cornell researchers have collected hundreds of cuttings and started planting them in various natural areas around East Hill; now, they have to wait and see how the young trees fare. “If they possess a genetic mutation that helps them fend off the adelgid,” says Whitmore, “we might be in luck.”

A War on Two Fronts

As they work to protect hemlocks, University foresters also struggle to save ash trees from an invasive beetle

The hemlock woolly adelgid is just one of two major tree infestations confronting the University’s plant experts and grounds crews. The other is the emerald ash borer beetle—confirmed last March in the City of Ithaca and on campus—which can kill an ash tree in under three years. Currently, more than thirty counties in New York are infested with the aphid, and the threat is even more dire for some fifteen other eastern states.

Cornell is now faced with the staggering task of applying pesticides to as many ash trees as possible; it has treated more than 3,500 so far, but the benefit lasts for two to three years at most. Among those that are hoped to be saved are a large tree on Libe Slope, estimated to be more than a century old and boasting a trunk that’s forty-three inches in diameter. Others being treated include a large ash below Willard Straight, several along Wee Stinky Glen, and a few others on the Engineering Quad. Ultimately, Bittner says, some 3,200 infected trees that could potentially fall on roads, walkways, buildings, or electrical wires may have to be removed over the next few years. According to University landscape architect Dave Cutter ’84, BS ’85, approximately eighty have been cut down so far, and 135 more are slated for removal.

While the ash borer infestation is catastrophic in its own right, Whitmore says that there’s an important distinction between that threat and the specter of the hemlock woolly adelgid. “I’m not downplaying the danger to ash trees; it’s tragic,” he says. “But if you take ash out of a hardwood forest, you still have other hardwoods. If we lose our hemlocks, we are looking at a potential collapse of our woodland areas and waterways, the impact of which could affect climate, soil, fisheries, and even the New York City watershed.”

A tagged tree near Beebe Lake bearing a label explaining the dangers of the emerald ash borer beetle. Provided

One thought on “The Forest for the Trees”