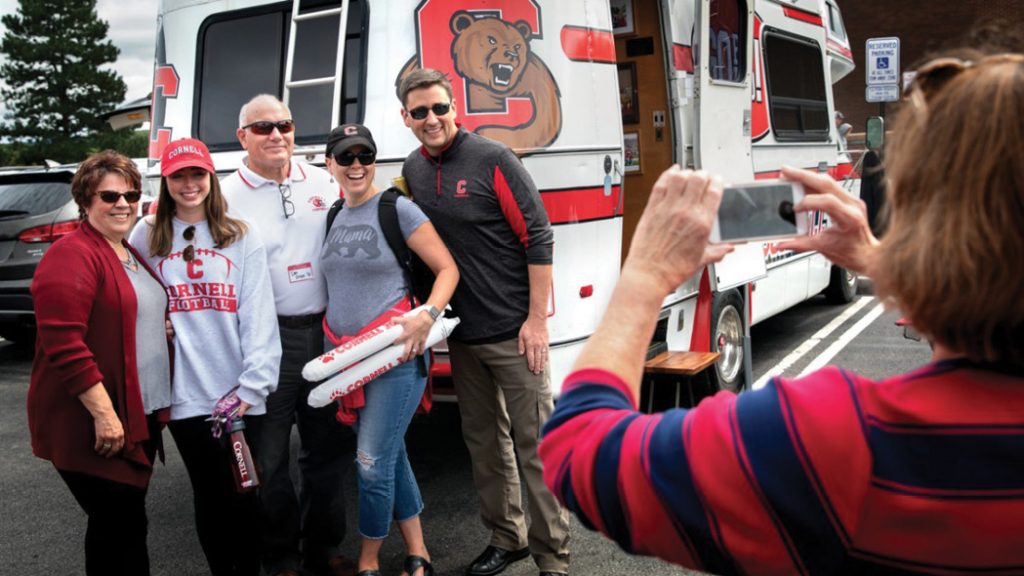 WHEEL COOL: A van (above) newly tricked out in Big Red style drew crowds of Cornellians during the tailgating festivities.Mandolyn McConaha/Brand Communications

Homecoming brought more than 12,000 alumni, students, parents, faculty, staff, and local residents to the Hill for a variety of activities and celebrations. Although the weekend started off on a down note—the fireworks and laser light show had to be cancelled due to heavy rains and threats of lightning—Saturday and Sunday brought some picture-perfect fall weather. At the Big Red Fan Festival in the Crescent lot on Saturday, visitors enjoyed a showcase of current teaching and research. Other festivities included tailgates, a Ferris wheel, and performances by the Cornell Orchestras and Big Red Band. Sadly, the Homecoming football game ended in a loss, with the home team falling to Yale 30-24.

The dean of the ILR school has been tapped to lead the SC Johnson College of Business. Economist Kevin Hallock (left) takes office in mid-December; his term runs through the end of the 2023–24 academic year. “His thorough familiarity with Cornell’s administrative workings is a significant asset,” says Provost Michael Kotlikoff, “and the college will be well served by his deep understanding of business administration theory and practice.” Hallock succeeds the college’s founding dean, Soumitra Dutta, who stepped down abruptly in January. A search is now under way for a new ILR dean; Alexander Colvin, PhD ’99, an associate dean and professor of conflict resolution, will serve in an interim capacity.

When Arthur Ashkin, PhD ’52, studied on the Hill, the physics department included two faculty—Hans Bethe and Richard Feynman—who’d go on to win the Nobel Prize. Now, Ashkin (left) has shared the 2018 prize with two others; at ninety-six, he’s the oldest person to win a Nobel. (A Washington Post story noted that Ashkin wasn’t available for interviews, because “he was too busy working on his next paper.”) A longtime researcher at Bell Laboratories in New Jersey, Ashkin was recognized for his revolutionary work in the Eighties inventing “optical tweezers”—beams of light that can pick up living cells without harming them. Ashkin’s son, Michael, chairs the art department in the College of Architecture, Art, and Planning.

Cornell’s plan to add housing on North Campus is picking up steam, as the project seeks municipal approvals and the University ponders design details. This fall, a mock-up of exterior materials was installed on the campus so designers could consider them in the context of existing buildings. “The goal,” the University says, “is to utilize a range of carefully coordinated colors and patterns to create a visually attractive and cohesive overall environment.” Approved by the Board of Trustees in 2017, the North Campus Residential Expansion will include new dorms for freshmen and sophomores, a fitness center, and a dining hall. The freshmen residences, to be located on the current site of playing fields north of Appel Commons, will comprise about 1,200 beds; there will be about 800 beds for sophomores, on land that’s now a parking lot. 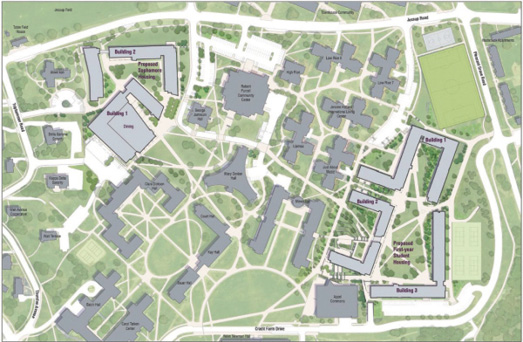 Currently, 99 percent of freshmen live on North Campus, and 55 percent of sophomores live in University housing. (Campus housing is guaranteed to freshmen and to sophomores who meet the appropriate deadlines.) The expansion plan aims both to improve the residential experience and to allow more sophomores to remain on North Campus if they so choose. And by opening up rooms on West Campus and elsewhere currently occupied by sophomores, it would give more upperclassmen the option to live in University housing rather than entering the local rental market; just 20 percent of juniors and 11 percent of seniors now stay on campus. 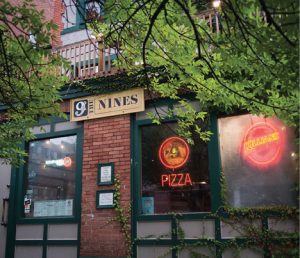 Another of Collegetown’s iconic locales has closed its doors. With its owners retiring, the Nines restaurant went out of business in October, after nearly four decades as a popular venue for deep-dish pizza and live music. Located in a former firehouse on College Avenue, the Nines was the subject of a lengthy debate this year over whether its building should be designated a historic landmark. Such a designation would have curtailed a developer’s ability to alter the property, and therefore reduced the resale value for the restaurant’s longtime proprietors, who own the building. But last summer—after contentious public hearings and a tie-breaking vote by Mayor Svante Myrick ’09—the City of Ithaca opted against the designation, potentially clearing the way for the Nines to be demolished and replaced by an apartment building.

‘Serendipity is lost when people are able to filter other people out.’

— Jevan Hutson ’16, MPS ’17, lead author of a paper arguing that dating apps reinforce biases when they allow users to filter searches by race, or use algorithms that do so

In a collaboration with the Medical College, CU engineers have developed and successfully tested a solar-powered device that can detect Kaposi sarcoma, a type of cancer often associated with AIDS in the developing world.

Using methods originally developed to study how electrons interact, physicists have developed a highly accurate model to predict the crowd behavior of people and other living creatures.

In a surgery that made headlines in the New York Times, veterinarians used a 3-D printed implant to replace part of the skull of a dachshund who had a large tumor removed—work that could inform human medicine.

Cornell Tech professor Deborah Estrin (left), winner of a MacArthur Fellowship, commonly known as a “genius grant.” Estrin, a computer scientist who also holds an appointment at the Medical College, studies how to improve health by leveraging the “small data” collected by cell phones and other devices.

Physics professors David Muller, PhD ’96, and Sol Gruner and colleagues, awarded the Guinness World Record for highest-resolution microscope. The instrument they designed can measure down to 0.039 nanometers (one-billionth of a meter).

That Cornell built a “green” parking lot over the summer?
Installed across Tower Road from Stocking Hall and the Dairy Bar, the lot has porous pavement that prevents runoff, among other sustainable features. 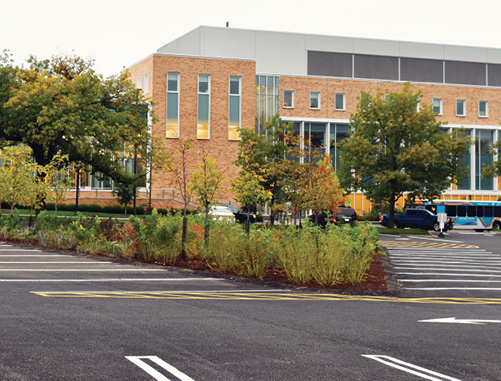 One of the University’s most high-profile faculty has resigned amid allegations of academic misconduct. Brian Wansink (left), a professor of marketing and director of Cornell’s Food and Brand Lab, was known nationwide for producing media-friendly studies on eating habits—including ways to cut calories with relative ease, such as using smaller plates or storing indulgent snacks out of sight. The author of the books Mindless Eating and Slim by Design, Wansink has made numerous TV appearances and collaborated on former First Lady Michelle Obama’s healthy eating initiative. But after his research results and methods were called into question, some two dozen articles were either corrected or retracted by academic journals.

In September, Provost Michael Kotlikoff issued a statement following a yearlong review of the allegations by a faculty committee, reporting that it “found that Professor Wansink committed academic misconduct in his research and scholarship, including misreporting of research data, problematic statistical techniques, failure to properly document and preserve research results, and inappropriate authorship.” Wansink will formally retire at the end of the academic year; he won’t teach or do research in the meantime, and will aid the University in its ongoing review of his work. “As a researcher, I am very sorry for any mistakes I have made in my papers,” Wansink tweeted in late September. “I apologize about how they negatively reflected on my colleagues, my wonderful school, and on social science research in general.”

For an installation as part of the Cornell Council for the Arts Biennial in September, the faces of McGraw Tower were each lit in a different hue (green, red, white, and blue). What four things did they represent?

(Use your mouse to reveal the correct answer.) 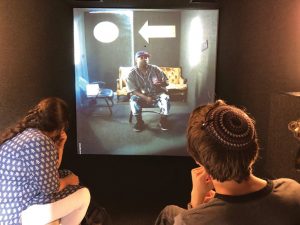 Window to the World

This fall, a gold-painted shipping container on the Arts Quad has offered Cornellians a chance to communicate with strangers around the globe. Dubbed Portal, the worldwide project—hosted on campus by the University Library—allows people to chat via videoconferencing technology.

Four dozen alumni chimesmasters from the Class of ’55 onward returned to campus over Homecoming weekend to mark the 150th anniversary of the Cornell Chimes. The festivities included a celebration on Ho Plaza (where the student chimesmasters playing in the tower were viewable via video feed) and “open chiming” throughout the weekend, when alumni could perform their favorites to a campus-wide audience. A banquet at the Statler featured an actress in nineteenth-century costume portraying Jennie McGraw Fiske, the benefactress who gifted the bells to the University shortly after its founding. 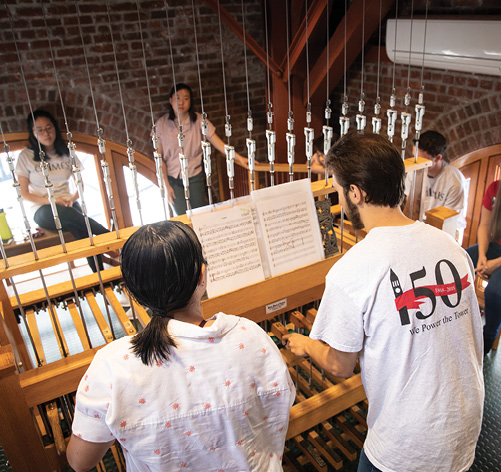 — Brenna Garcia ’20, reflecting on the 150th anniversary of Ezra Cornell’s “Any Person… Any Study” pledge

For the first time since the University put netting under the bridges on and near campus to deter suicides, one has apparently saved a life. In late September, the Ithaca Fire Department rescued a man who had jumped from the Stewart Avenue bridge and landed in the nets below. According to the Daily Sun, bystanders including a University building care worker talked to the man—who described himself as a Cornell senior, though he has not been identified—and kept him calm until help arrived.