Urban renewal was kinder to Ithaca than to some Upstate cities, but over the past century many stately buildings have still been lost—from Ezra Cornell’s Free Circulating Library to Alonzo Cornell’s mansion to the grand old Strand Theatre. In a series of photos recently exhibited at the History Center of Tompkins County, former visiting professor Mark Iwinski captures the ghostly images of bygone structures superimposed over what stands in their place. Often, it isn’t pretty.

In a series of haunting images, Ithaca's past and present collide 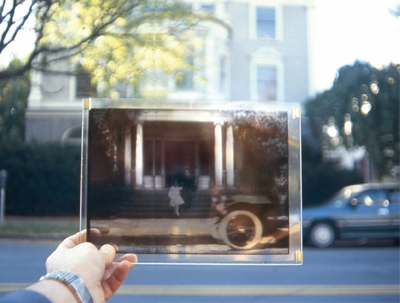 Like every city, Ithaca is filled with ghosts. Along the shore of Cayuga Lake, the flamboyant silent film star Pearl White poses for publicity shots in her roadster. Downtown, the Cornell Free Circulating Library stands as a temple to knowledge, while the Temperance Fountain on Tioga Street bubbles frothy warnings against the sins of demon rum. Shoppers crowd Rothschild's department store on the corner of Aurora and State streets. Trolleys chock full of Cornell students jostle up and down the Buffalo Street hill. The City Hall at the corner of Seneca and Tioga streets offers a stately backdrop for officials busily managing the affairs of the day.

Those willow trees behind Ms. White were not there in her time. Tompkins Consolidated Area Transit buses glide alongside trolleys. The Seneca Street parking garage looms atop a City Hall no longer in existence.

In "This Was Now," an exhibit of images by former Cornell visiting professor Mark Iwinski, the past and present exist side by side. On view last fall at the History Center of Tompkins County—itself housed, appropriately, in a converted Mayflower Moving and Storage building now known as the Gateway Center, at the foot of East State Street—the images feature vintage shots superimposed over modern downtown structures in situ. They contrast the "busy humming of the bustling town" with modern versions of the same sites, few of which compare favorably with the oldies.

The photos—or "re-photos," as the artist calls them—highlight changes in society reflected through an altered urban landscape, and their effect is both instructive and haunting. For example, it is striking to see the bygone, Victorian-era City Hall superimposed over the existing parking garage and bus stop—or, right across the street, Ezra Cornell's handsome Free Library atop what is now a drive-through bank and parking lot. The photo of Alonzo Cornell's former mansion on Seneca Street, once a promenade of lovely Victorian homes, includes vague apparitions of long-dead citizens; in contrast, a modern-day woman crosses the street, shielding her eyes against the morning sun.

Iwinski's approach allows the viewer to see the old Ithaca in all its nineteenth-century splendor, yielding to socioeconomic forces that tore across the country. While they evoke nostalgia, the images also cast a cold eye on the present. Consider that the site of the grand old Strand Theatre, torn down nearly two decades ago, is now just a gravel parking lot. 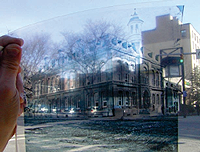 Mingling history with art, the show drew the attention of Johnson Museum director Frank Robinson, who went to the opening. The exhibit, he says, takes a "highly interesting approach to using art to get us to think more deeply about how we do things with the world around us. It's a great reminder that what we hold dear to our eyes is perishable." Iwinski titled many of these shots "Terrains of Absence," and while they can serve as a cultural critique, local historian and Cornell lecturer Carol Kammen says it's important to consider the bigger picture. "Urban renewal was somewhat gentler here than in other Upstate cities," she says. "Look at Auburn, Rome, and Geneva, where there is little trace of the city's downtown."

Ah, but see the once-thriving State Street—with its barbershops, tailors, shoe stores, and groceries—where today stands the Commons, for better or worse. And the Strand, which—even dilapidated and full of pigeon droppings—had people fighting for its preservation until it finally succumbed to the wrecking ball. And the wonderful old Lyceum Theater, once one of more than a dozen grand performing houses downtown. As Morris Bishop 1913, PhD '26, writes in A History of Cornell: "The president of the streetcar system had a private car, mahogany fitted, with curtained red glass windows. On theatre nights it brought the cream of Ithaca society to and from the Lyceum, arresting all traffic for commoners if the performance was prolonged." 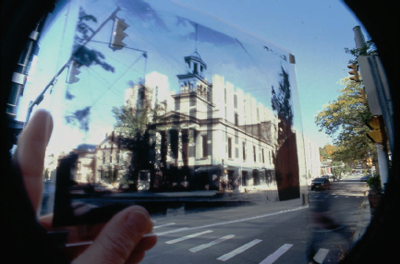 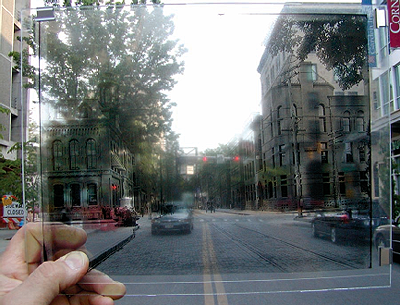 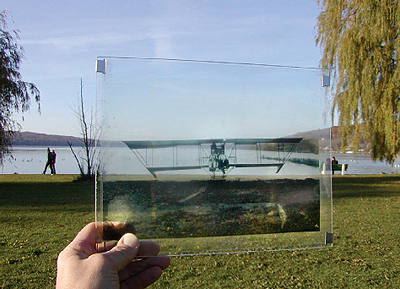 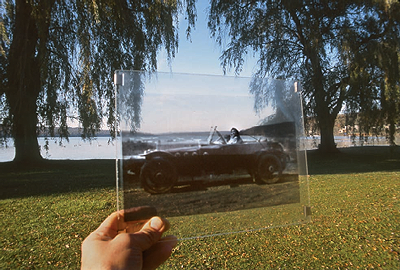 To create the images, Iwinski studied downtown maps and the History Center's vintage glass photo plates. With the help of the center's archivist, he developed a sense of downtown as it had been a century or more ago. Armed with transparencies made from the plates, he set up shop where the original photographer had stood. Giving the term "handheld" a new spin, he clasped each transparency—his fingers are often visible—and lined them up so they overlapped perfectly with the current view. "I got a lot of comments from people passing by," Iwinski recalls. "Many of them who had no idea of local history were upset, and even angered, by changes the so-called city fathers allowed." Iwinski says that his layering concept was greatly influenced by the writings of Roland Barthes—the French literary theorist, philosopher, and critic who came to photography late in life and saw in still images "the return of the dead."

Downtown Ithaca, architectural hodge-podge though it may be, is not dead—though its relationship to Cornell students has changed dramatically. Kammen notes that its shops, restaurant, and bars were once a magnet for undergrads, but today there are many more amenities on campus and in Collegetown. "I've spoken to freshman students who were here for an entire year and never went downtown," she laments. "They don't have to anymore. 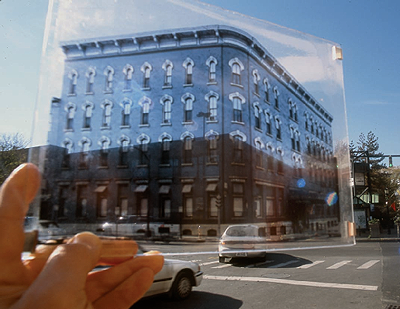