Last spring, Academy Award-winning actress Rachel Weisz appeared before a film festival audience to discuss her latest movie, Disobedience, an indie drama about a love affair between two Orthodox Jewish women that she produced and starred in alongside Rachel McAdams. During a chat with the event’s master of ceremonies—late-night host Stephen Colbert—she talked about everything from creating experimental theater early in her career to recently starting a production company that’s focused on telling stories centered around women. So when an aspiring actress asked for advice during the Q&A portion of the evening, Weisz spoke from experience. “Write a play and put it on. Write a Web series, film it on your iPhone,” she said with a wide smile. “Don’t just wait for work to come to you. Make your own work.”

Weisz’s appearance didn’t take place in Manhattan or L.A., Telluride or Toronto. She was in a medium-sized New Jersey town (population: 39,000), at a regional event that has quickly become a favorite stop for movie industry A-listers. Since the Montclair Film Festival debuted in 2012, stars like Weisz, Richard Gere, Claire Danes, Jeff Daniels, and Ethan Hawke—as well as powerhouse directors like Richard Curtis, Rob Reiner, and Jon Favreau—have headed to the New York City suburb to showcase their work. The festival’s rapid rise comes thanks in large part to its founder, attorney Bob Feinberg ’84, who got the idea after showing off his hometown to a co-worker who was considering a move there. As Feinberg proudly pointed out some of the area’s cultural institutions—a century-old art museum, an independent cinema, and a former 1920s movie palace turned concert hall, to name just a few—his colleague asked if Montclair had a film festival. “We didn’t,” says Feinberg, now chairman of the festival’s board of trustees. “And then I thought, Well, why not?”

That inspired him to launch a grassroots effort in Montclair, tapping his connections as vice president and general counsel at WNET, the PBS flagship station in New York City. He organized fundraisers and hired veteran festival directors to get the project off the ground, later helping recruit prominent residents like Colbert, makeup maven Bobbi Brown, and actor Patrick Wilson as advisers and board members. More than 7,500 movie lovers attended the inaugural festival, watching seventy-five films over seven days at venues throughout town, with special guests such as director Michael Moore and actors Kathleen Turner, Oliver Platt, and Olympia Dukakis.

In the intervening years, MovieMaker magazine has twice named Montclair to its list of the “25 Coolest Film Festivals in the World.” Top-notch selections are part of the attraction, with a wide array of foreign films, documentaries, and future Oscar contenders offered in the typical lineup. (La La Land and Moonlight are just a few of the films that were shown in Montclair before gaining widespread acclaim and major awards.) Last year, for instance, the festival held a pre-release screening of the well-reviewed coming-of-age drama Eighth Grade, followed by a Q&A with director Bo Burnham. 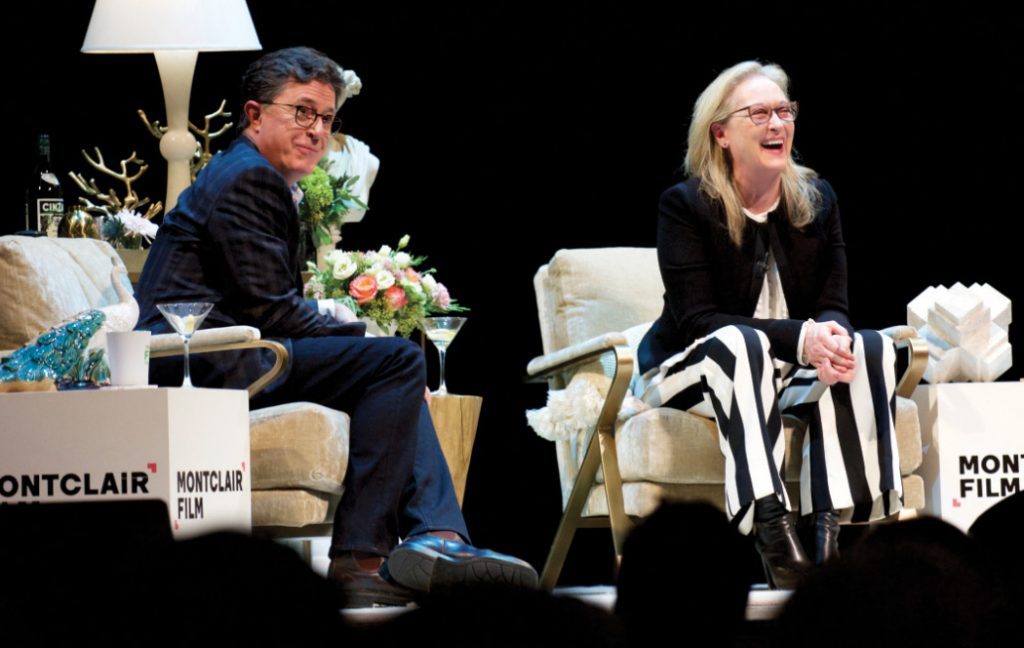 Feinberg believes that Montclair’s festival stands out because it champions the creative side of moviemaking in a small-town setting. He says festivals like Sundance have become more like marketplaces, where auteurs go to sell their projects and land distribution deals. “There’s a real industry aspect to them,” he says. “The Montclair Film Festival is purposefully not that. It’s really about community. When people bring their films to Montclair—whether they’re Richard Gere or a first-time, independent filmmaker—they walk away feeling like they’ve been embraced.”

In early 2017, Feinberg’s organization—now a nonprofit dubbed Montclair Film—gained a permanent home, which allows it to offer educational and entertainment programs year-round. The headquarters is the result of a two-year, $3.5 million capital campaign to renovate the 6,000-square-foot building, donated by a regional bank. Colbert—who has headlined six-figure fundraisers since the festival began, and whose wife currently serves as board president—contributed significantly to the cause by hosting sold-out evenings with celebrities like Jon Stewart, Steve Carell, Samantha Bee, and Meryl Streep. Montclair Film now boasts a $2 million annual budget, a full-time staff of ten, and hundreds of volunteers. It shows independent films in its sixty-five-seat cinema five nights a week; holds improv and storytelling shows; offers workshops on topics like screenwriting, editing, cinematography, and makeup design; and hosts an annual filmmaking competition for students in grades six through twelve. “There’s a lot of sizzle associated with a ten-day festival,” notes Feinberg. “But the year-round programming is just as important to us.”

And as for this year’s festival? Feinberg estimates that the event, which is set for May 3–12, will draw as many as 30,000 visitors—a figure approaching the population of its host town. “The trajectory,” he says, “has been nothing short of incredible.”