Labor historian Louis Hyman opens his most recent book with a dramatic twist. First, the ILR professor recounts a recession-era speech in which a leading executive stressed the need for American firms to lower costs by rolling back job security, using more temporary workers, and increasing automation. Then he reveals the year in which the talk was delivered: “not in 2008, but in 1958.” 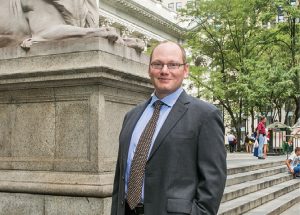 In Temp, published last summer by Viking, Hyman chronicles how America evolved away from the ideal of secure employment, challenging a host of assumptions along the way. He demonstrates not only that the shift toward temporary labor began in the late 1940s—decades before the advent of Craigslist and Uber—but that for women, minorities, and immigrants, the vaunted “man in the gray flannel suit” era of well-compensated, lifetime employment never really existed. “This was the postwar era, where we created the stable job; how did these new forms of labor get invented in a time when work was supposedly meant to be secure?” muses Hyman, chatting with CAM by phone from Manhattan, where he directs ILR’s Institute for Workplace Studies and teaches a weekly seminar for ILR students interning in the city. “But as it turns out, that stable job was only for white men, whether they worked in unionized factories or white collar offices.”

One of the main characters in Hyman’s book—which the New York Times lauded as “illuminating and often surprising”—is Elmer Winter, deliverer of that 1958 speech. Ten years earlier, he had co-founded Manpower, the now-global temp agency that Hyman says “was almost singlehandedly responsible for undermining postwar job security.” Hyman describes how Winter positioned Manpower as no threat to full-time workers; on the contrary, Winter said, it helped them by providing replacements during vacations or illness. Besides, Winter argued, his temps weren’t “career girls”; they were married women just earning extra money for their families. “Temporary work was possible in the postwar era because it was framed as women’s work, and therefore wasn’t deserving of better wages and security,” explains Hyman, whose previous books include Debtor Nation: The History of America in Red Ink. “This created the opportunity to rehearse a more insecure economy through women, as well as people of color and migrant laborers [in other arenas of employment], that would never have been acceptable if it had been applied to white men.”

Just as services like Manpower showed companies that they could prosper without providing job security and benefits to a portion of their workforce, Hyman writes, another firm—the management consultancy McKinsey—spread the gospel of workplace Darwinism throughout the C-suite. The firm, where Hyman himself worked before shifting to academia, developed what he describes as a culture of brutal meritocracy for its consultants, in which “every evaluation contained the possibility of promotion or firing.” That philosophy, he says, was not only passed on to the firm’s corporate clients, but was propagated by former McKinsey consultants who went on to lead companies worldwide. McKinsey’s performance, Hyman writes, “was a result of the way in which employees could not count on job security. Bringing that excellence, and insecurity, to their clients—first in the U.S. and then abroad—would reshape the future of the corporation.”

In writing about temporary labor, Hyman drew on some personal experience: in high school, he had a summer job as a data-entry temp, a dull gig whose main appeal was air conditioning. He majored in history and math at Columbia, earned a PhD in American history from Harvard, signed on with McKinsey, and had a bit of an epiphany when he went on his first assignment. “On my very first day of work,” he recalls, “I sat down in this big corporate boardroom and thought, I’m a temp, just like I was in high school—only now I’m wearing a suit and I’m paid ten times as much.”

While researching Temp, Hyman interviewed none other than Craig Newmark, the tech industry gig worker who inadvertently upended the marketplace by founding his eponymous online “list.” He tapped such varied sources as Winter’s personal archives and the Nineties-era “zine” (indie magazine) Temp Slave. He also dived into an internal library at the Immigration and Naturalization Service; the book includes a primer on the history of migrant labor in the U.S., not only in agriculture, but—surprisingly—in the tech industry. During the rise of personal computing, he explains, companies touted high-tech factories with “machines building machines”; the reality was far less futuristic, with some workers assembling circuit boards with their fingernails. “To understand the electronics industry is simple: every time someone says ‘robot,’ simply picture a woman of color,” he writes. “Instead of self-aware robots, workers—all women, mostly immigrants, sometimes undocumented—hunched over tables with magnifying glasses assembling parts, sometimes on a factory line and sometimes on a kitchen table. Though it paid a lot of lip service to automation, Silicon Valley truly relied on a transient workforce of workers outside of traditional labor relations.”

One of Hyman’s central arguments is that, contrary to received wisdom, technology isn’t a primary driver of job insecurity; after all, the postwar heyday of stable employment coincided with the dawn of the Jet Age. Rather, he attributes the shift to changes in corporate values and fiscal policy, such as a focus on quarterly profits over long-term growth. “People imagine that insecure work began with Uber, but I say in the book that Uber is the waste product of the service economy,” says Hyman, who’s currently commuting to Ithaca to teach The History of Consumption: From Wedgwood to Walmart, which draws about 200 students each spring. “What I mean is that Uber is only possible because the alternatives for working people are so bad. It’s not like if you work at Starbucks or Walmart you’re very secure and well paid.”

Hyman cautions readers not to be overly nostalgic for a perceived golden era of employment—which, even if it benefited some workers, was also a time of profound racial and gender inequality. On an optimistic note, though, he stresses that if employment insecurity is the result of policy decisions, then different choices can be made to mitigate it; factors like portable benefits and universal healthcare, he says, could leverage the gig economy’s advantages (like flexibility) while ameliorating its downsides. “I don’t think it’s depressing to think that the economy doesn’t run on autopilot,” he says. “It’s invigorating that we have choices over where we want this all to go. It reminds us that people can act to make America worthy of its promises.”