Last October, the Texas Rangers won baseball’s American League pennant—and played in their first-ever World Series. Two of the primary architects of that long-sought victory were Big Red alums from (of all places) the Big Apple. General manager Jon Daniels ’99 and senior director of player personnel A. J. Preller ’99 are old friends and lifelong baseball nuts who brought fresh energy to an underperforming franchise. And while they didn’t take home the championship trophy . . . there’s always next season. 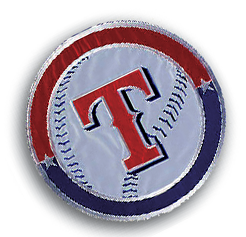 Last October, as smoke from celebratory fireworks drifted into the sky and confetti danced in the breeze, some 54,000 win-starved fans cheered themselves hoarse in the Ballpark at Arlington, home of the Texas Rangers. Three neon words shouted from the scoreboard: HELLO WORLD SERIES.

For the first time in the fifty-year history of the franchise, the Rangers had won the American League pennant, having just defeated the twenty-seven-time-champion New York Yankees. The Rangers mascot, a Stetson-wearing Palomino, waved the Lone Star flag as team president (and retired Hall of Fame pitcher) Nolan Ryan held up the championship trophy. "Our fans have waited a long time," Ryan told the assembled masses. Then he tipped his cap to the team's general manager, a thirty-three-year-old Cornell graduate whom a sportswriter once described as "five-foot-eleven and built like a ballpoint pen." Said Ryan: "It's a credit to our organization—to Jon Daniels and the staff he put together." 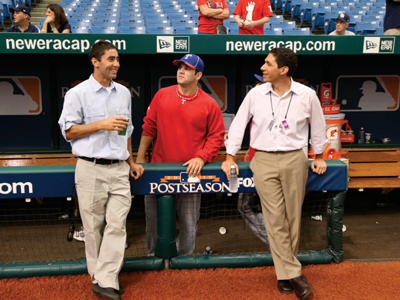 From his perch in a suite above the field, Rangers senior director of player personnel A. J. Preller '99, a classmate and fraternity brother of Daniels who oversees the team's scouting operations around the world, could only marvel at the merriment. They say everything's big in the Lone Star State—but who would have guessed that two of the primary architects of the biggest moment in Texas baseball history would be a couple of Big Red pals from the Big Apple?

A championship celebration had seemed a long way off when the two men took charge of the team five years earlier. Daniels's promotion in 2005, just forty-one days past his twenty-eighth birthday, made him the youngest GM in major league history; it was the hook for so many media stories that he felt as if he had changed his first name to "twenty-eight-year-old." There was a good deal of skepticism; the Dallas Morning News reported that some people were calling him "Doogie Howser, GM." Indeed, the press conference announcing his hiring sounded almost apologetic. "He came from a different gene pool," said Tom Hicks, then the team's owner, "and that's OK."

Actually, it was part of a baseball trend. Back in the day, the GM position was usually reserved for lifers, former players who operated on instinct. But in recent years the game has embraced a cadre of well-educated, under-forty number crunchers comfortable with the comprehensive quantitative assessments that have worked their way into the baseball lexicon—statistics like WHIP (walks plus hits per innings pitched) and defense-independent earned run average. Yale's Theo Epstein is GM of the Boston Red Sox; Princeton's Mark Shapiro is president of the Cleveland Indians; Harvard's Paul DePodesta is vice president of player development for the New York Mets.

But when Ryan took over as Rangers president in 2007, more than a few observers wondered if a strikeout king who's as Texan as the two-step could find common ground with a twenty-something from Queens who had never played organized baseball beyond Little League. By all accounts, however, the relationship is strong, based on mutual respect. "We have a lot of shared values and a lot of similar beliefs about how to build a team and how to treat people in an organization," says Daniels, who lives with his wife, Robyn, and two children in the Dallas suburb of Southlake.

Although an "I ♥ NY" coffee mug still sits on his desk, Daniels admits, "I do own a pair of boots." And while his parents still call him Jonathan, he is known throughout the Rangers organization by the more cowboy-like "J. D." But being comfortable in your own shoes is one thing; being embraced by the boot-wearing masses is quite another. In sports, such acceptance tends to come with success—and Daniels had high hopes from the beginning. At his first organization-wide meeting after his inaugural year as GM, a dinner-and-bowling affair, there were speeches and laughs; then Daniels had everyone's ring finger measured. "My mission is the same as that of the twenty-nine other general managers," Daniels said at the time. "It's first and foremost to win."

In Texas, that was a tall order. Daniels had inherited a weak minor league system, an overpriced major league roster, and a franchise that had won a single playoff game in half a century, dating back to its origins as the lowly Washington Senators. A couple of months into the 2010 season, the team's ownership situation was in limbo, as the Rangers filed for Chapter 11 bankruptcy protection. A group led by Ryan and Pittsburgh sports attorney Chuck Greenberg (who is no longer with the team) would eventually win a contentious auction for the franchise in mid-summer.

Despite this gloomy record, Daniels and Preller were optimistic. The night after Daniels was announced as GM, he called Preller, who had joined the Rangers a year earlier and was scouting prospects in the Dominican Republic. They talked for hours—making grand plans, envisioning possibilities. Says Preller: "We basically said that we were going to get this thing done—together."