War fever gripped Cornell in 1898, when America threw down the gauntlet against Spain in support of Cuban independence. Some 300 Cornellians signed on for the fight. Among those who dropped their studies to join the fray was twenty-two-year-old architecture student Clifton Beckwith Brown 1900. He was assigned to New York’s 71st Infantry, which landed at Santiago on July 1, 1898. Charged with taking a low ridge on San Juan Hill, Brown’s unit was shot to pieces and broke ranks. The intrepid Cornellian ditched his Civil War-era Winchester, grabbed a modern rifle from a fellow soldier’s corpse, and led an advance on a hilltop bunker. While he was clipping strands of barbed wire, a Spaniard’s bullet pierced his skull. 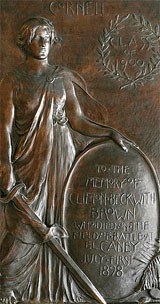 Back in Ithaca, the campus mourned his death and marked his sacrifice. In a ceremony attended by President Theodore Roosevelt, two stately spruces were planted in his honor in front of his fraternity, Delta Kappa Epsilon; a plaque was inscribed in his memory and remains in the house to this day.

More tributes were to come. Brown’s brother established the Clifton Beckwith Brown Memorial Medal, still given annually to the student with the highest cumulative average in architectural design. He also commissioned Bela Lyon Pratt, an American sculptor whose star was on the rise, to create a campus memorial. Borrowing a scene from Homer’s Iliad, Pratt designed a large bronze bas relief. Weighing some 150 pounds, the tablet depicted Thetis, mother of Achilles, holding a sword and shield made by Hephaestus, the god of fire. A Daily Sun review described the piece as “having the strong decorative sense, for which Pratt is justly noted, in the happy placing of the different elements of the composition and the delightful way in which he has treated the ornamental features.”

Cornell President Jacob Gould Schurman spoke at an unveiling ceremony in Uris Library on January 23, 1900. “With the death of Clifton Beckwith Brown, Cornell has entered upon a new era,” he said. “He is the first Cornellian to die for his country. Our young hero has fallen and we have been baptized to a new life by the blood of a martyr.”

It was a somber and resolute occasion—but Uris was never intended to be the memorial’s permanent resting place. Funds for a proposed Alumni Hall were being sought and, according to DKE records, the tablet was to be mounted there. That hall was never built, and as Uris expanded it was moved into storage in the library, where it stayed for more than a century. Around 2000, DKE alum Bill Fogle ’70 was reminded of the Brown tale when he became house historian, prompting the former Marine to search for the tablet via e-mail from his home in Arizona. By that time, University officials were uncertain of its exact location, a fact that frustrated Fogle to no end. How could 150 pounds of bronze go missing? Rumors that it spent eight years in Barton Hall, for instance, ultimately proved untrue; Morris Bishop 1913, PhD ’26, in his History of Cornell, erroneously placed it in the College of Architecture.

Fogle not only wanted the memorial tablet found, he wanted it mounted in a place of honor. It was finally located in Uris—intact and, according to the librarian who answered his query, “perhaps a little dusty.” For safekeeping, the piece was temporarily relocated to Kroch Library, home of Cornell’s Rare and Manuscript Collections. “The tablet was never really lost,” says University Archivist Elaine Engst, MA ’72. “It was in Uris Library, but no one knew quite where. We brought it here so we’d know exactly where it was until a decision was made about its final display.”

In May, the tablet was mounted on the east wall of the Hartell Gallery in Sibley Dome. Now that it finally has a permanent home, Fogle plans to organize a memorial to honor the first Cornellian lost to a war.