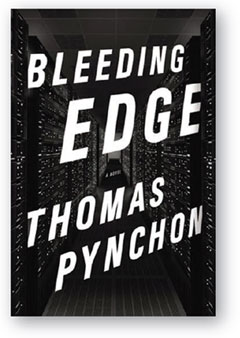 Pynchon sets his latest novel in New York City in 2001, between the dot-com bust and the fall of the Twin Towers on 9/11. His heroine, Maxine Tarnow, is a divorced mother of two young sons and an unlicensed fraud investigator who operates in the shadowy world of Silicon Alley, where she encounters con artists, venture capitalists, drug runners, code monkeys, Russian mobsters, and hackers who vie for what crumbs are left after the boom. She discovers plots, paranoia, the Deep Web, and more about the “spectrum of hometown larceny” than she bargains for.

The Last Next Time by Paul Cody, MFA ’87 (Irving Place). After more than two decades of sobriety, novelist and former CAM associate editor Cody fell into prescription drug addiction. Although he was still able to teach, he knew he needed help. He entered rehab at the Caron Treatment Center in Pennsylvania, one of the oldest in the nation, where he spent almost six weeks and met lawyers, soldiers, doctors, fighters, and businessmen who were also addicted to heroin, alcohol, methamphetamine, cocaine, or pills. He sees his fellow addicts’ struggles—and his own—with greater understanding and compassionate clarity.

Revenge Wears Prada by Lauren Weisberger ’99 (Simon & Schuster). In the sequel to The Devil Wears Prada, Andy Sachs no longer works as an assistant for Miranda Priestly, editor of Runway and the world’s most demanding boss. Now her life seems perfect. She’s the co-founder of The Plunge, a successful high-end bridal magazine she launches with Emily Charlton, Miranda’s other former assistant. And she’s engaged to Max Harrison, the wealthy scion of an elite New York City family. But the dream turns to nightmare when Andy finds a letter in which Max’s mother begs him to marry someone else.

The Fate of Freedom Elsewhere by William Michael Schmidli, PhD ’09 (Cornell). When Jimmy Carter entered the Oval Office at the height of state-sponsored violence in Argentina, he tried to shift U.S. policy from tacit support of the military’s “dirty war” to condemnation of human rights violations. Schmidli, an assistant professor of history at Bucknell University, shows how Carter played an important role in convincing the junta to accept a visit by the Inter-American Commission on Human Rights. By the time Reagan became president in January 1981, however, Carter’s idealism had largely been supplanted by a more traditional brand of Cold War realism.

Magic Health Remedies by Joey Green ’80, BFA ’81 (Rodale). Joey Green has made a career out of finding unorthodox applications for everyday household items. Using inexpensive brand-name ingredients that can be found in refrigerators, pantries, or kitchen cabinets, he demonstrates how they treat common ailments—everything from allergies and back pain to hay fever and morning sickness. Frozen peas, apple cider vinegar, mustard, Jell-O, vanilla extract, coffee, peanut butter, Cool Whip, and canned tuna are just a few of the things that can serve as home remedies. And each chapter ends with advice that requires no products at all.

Midnight by Kevin Egan ’74 (Forge). Employees of the New York County Courthouse continue to be paid until the end of the year if the judge they work for dies. When Judge Alvin Canter dies in chambers on New Year’s Eve, his law clerk and his secretary try to conceal the judge’s death until the next day. But their plan to guarantee a year’s pay soon goes terribly awry.

Recipe for a Happy Life by Brenda Janowitz ’95 (St. Martin’s Griffin). Hannah Goodman seems to have everything going for her—success as a lawyer and a handsome boyfriend—but when it all comes crashing down she retreats to her glamorous grandmother’s house in the Hamptons where she learns to put her life back together.

Love Gone Mad by Mark Rubinstein (Thunder Lake). After heart surgeon Adrian Doug­las falls in love with Megan Haggarty, a neonatal ICU nurse at the hospital where they work, strange things happen and they soon realize their lives are in danger. A stalker seeks revenge against them for a crime that exists only in his mind.

The Spectra by Fred Muratori (Stockport Flats). In his third collection, Muratori, bibliographer for English-language Literature, Theater, and Film at Cornell University Library, writes about the mystery of thought—”its heft, its velocity, its unpredictability, its sad attempts to emulate the physical.”

Fannie + Freddie by Amy Sara Carroll, MFA ’95 (Fordham). The winner of the Poets Out Loud Prize cuts through what she sees as the sentimentality of post-9/11 rhetoric to portray contemporary America.

Heart. Wood. By Eric Torgersen ’64 (Word). In his latest collection, a professor emeritus of English at Central Michigan University reveals the wisdom of the heart with self-deprecating humor.

The Emergency State by David C. Unger ’67 (Penguin). “Without recognizing it, let alone debating it, America has slipped into a permanent, self-renewing state of emergency,” states Unger, a New York Times editorial writer. He argues that America is trapped in a state of war. “This change has deformed our politics, diminished our liberties, distorted our relations with the rest of the world, and undermined America’s inherent economic strengths.”

Chinese Cubans by Kathleen López, MA ’95 (North Carolina). In the nineteenth century, more than 100,000 Chinese were brought to Cuba as indentured laborers. They were later followed by merchants and free migrants in search of better lives. An assistant professor of Latino and Caribbean studies at Rutgers University follows the history of the Chinese as they made the transition from “coolies” to full citizens of Cuba.

Mothers Unite! by Jocelyn Elise Crowley ’92 (Cornell). A professor of public policy at Rutgers University analyzes the work of five national mothers’ organizations and argues that they have the potential to turn the issue of workplace flexibility into the foundation of a true movement.

A Living Exhibition by William S. Walker ’00 (Massachusetts). The Smithsonian Institution has undergone profound changes in the last fifty years. An assistant professor of history at the Cooperstown Graduate Program, SUNY Oneonta, shows how the Smithsonian’s exhibitions of cultural history, anthropology, and folk life reflect the larger context of social movements and public debates in the nation.

Financial Justice by Larry Kirsch ’62 and Robert N. Mayer (Praeger). In the wake of the credit collapse of 2008, consumer, labor, civil rights, fair lending, and community groups came together to fight against predatory lending. An economist and his co-author follow the campaign to pass the Dodd-Frank Wall Street Reform Act and create the Consumer Financial Protection Bureau.

A Companion to Organizational Anthropology edited by D. Douglas Caulkins, PhD ’82, and Ann T. Jordan (Wiley). A professor emeritus of anthropology at Grinnell College edits a collection of studies on the anthropology of such complex organizations as government agencies, nonprofits, and transnational corporations.

Developmentally Appropriate Practice edited by Carol Copple, PhD ’73, et al. (NAEYC). In two volumes, one devoted to infants and toddlers and the other to preschoolers, the editors provide teachers with resources to help students reach goals that are both challenging and achievable.