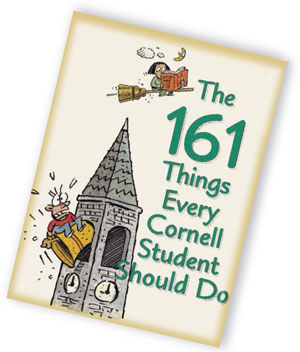 Twenty years ago, CAM attempted to encapsulate the breadth of the Cornell undergraduate experience. With a nod to the 161 steps up McGraw Tower, we compiled “161 Things Every Cornell Student Should Do.” It was the ultimate to-do list, or perhaps a challenge.

The list took on a life of its own. The Daily Sun printed its own version (compiled from an e-mail survey), calling it the “Big Red Ambition” list. Although updated occasionally, it retains a certain. . . hormonal vibe. For instance, our version said: “Have an epiphany in the stacks.” The Sun’s version: “Have sex in the stacks.” And “Do the Walk of Shame.” And “Write dirty messages with rocks in the gorge.” Amorous inclinations aside, the 161 Things have entered the consciousness of Cornell students, so much so that spin-off lists emerged, from “56 Things Every Cornell Scientist Should Do” (“Stay up all night memorizing your 20 amino acids”) to “28 Things Every Cornellian Should NOT Do” (“Wear stilettos to class”). For alumni, the list offers a reminder of their student days; many of its items are perennial pleasures, familiar to grads of any era, while others have a distinctly twenty-first-century quality. If there are some you’ve missed out on, there’s always time to catch up on your next trip to the Hill.

As for our original list, which is available at cornellalumnimagazine.com, a few entries now appear dated (“Learn how to use the Internet”)—or are even considered downright dangerous (“Skinny dip in the gorge at night”). So for the Sesquicentennial, we decided it was a time to re-examine it. We culled and tweaked the best of the old (including some from the Daily Sun), threw in a heap of the new, and came up with a contemporary catalog of quests—an array of options both quirky and quintessential.

2. Stay up all night arguing about the existence of God.

3. Become a groupie of an Ithaca band.

4. Geo-cache your way across campus.

5. Get to know a professor so well she invites you to dinner. Discover that professors have families.

6. Watch a football game from the highest point in the Crescent.

8. Write an indignant letter to the editor of the Daily Sun.

10. Scour the course manual for the quirkiest class you can find. Schedule it.

11. Get lost in Cayuga Heights.

12. Try everything on the Hot Truck menu at least once.

14. Make it to the top of the Lindseth Climbing Wall in Bartels Hall.

15. Join hundreds of fellow students volunteering with local social service nonprofits during the annual “Into the Streets” event.

16. Be the subject of a psychology experiment in a windowless room in Uris Hall.

17. Listen to the echo on the side of the Johnson Museum. Go inside and consider the echoes of history.

19. Sing “Puff the Magic Dragon” in front of the house (343 State Street) where it was written.

21. Attend a religious service—for a faith you know nothing about.

22. Tonic for a hangover: sing along at the Hangovers’ annual Fall Tonic concert.

24. Savor cheese-and-gravy fries at the State Diner at 2 a.m.

25. Spend a day without using your cell phone. Wonder how your parents ever did it.

26. Watch a seismograph in action in Snee Hall.

28. Locate some old college guides and turn to the Cornell entry. Sit around with your pals and mock the anachronisms.

29. Read about Odysseus’s return to Ithaka while drinking coffee at the Temple of Zeus.

32. Pick up a pint of ice cream at the Dairy Bar. Race to Purity Ice Cream on Route 13. Compare.

33. Wear sandals to class in January. 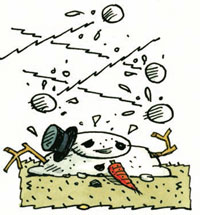 36. Make it a double feature by adding The Wizard of Oz with Frank Morgan 1912 as the title character.

37. Flirt with someone, anonymously, via the Sun personals.

40. Join a quirky student organization. Turn a whim into a passion.

42. Fall asleep in Uris Library’s Fishbowl. Worry that the crowd above was watching you drool.

43. Go on a campus tour. Ask the guide to show you the Medical college.

46. Take an Outdoor Education course, and learn more about yourself in a week than you will in a semester in a classroom.

48. Get into a heated debate at a political rally in front of the Straight. Run into your antagonist later at a bar. Buy him or her a drink.

51. Attend the Centrally Isolated Film Festival at the Schwartz Center for the Performing Arts.

52. Hunt for the oddest Big Red souvenir at the Cornell Store. Buy it.

53. Peer through a telescope at the observatory atop Mount Pleasant. Channel Carl Sagan.

54. Park yourself at noon at Libe Slope Overlook. Stay through sunset.

55. Take at least one class in each of Cornell’s seven undergraduate colleges.

56. Have a conversation in which everybody quotes dialogue from Monty Python.

57. Visit an actual particle accelerator at the Wilson Synchrotron Laboratory.

60. Gain bovine insight: peer into a rumen fistula cow at the Vet college.

61. Skip class and hang out on the Arts Quad, carrying only a paperback novel.

62. Seek out a classmate named “Louie.” Treat him to Louie’s Lunch.

63. Complete all five one-mile loops that are part of Cornell’s Wellness Walking Map—in one day.

65. Cheer the Big Red at road games—at each of the other seven Ivies.

66. Shout “Screw B.U., Harvard, too!” while watching a hockey game in Boston.

67. Spend an evening marveling at Cosmos, the 12,000-LED light display at the Johnson Museum.

68. Order a yard of beer at the Chapter House, then search the wooden tables for generations-old carved initials that match yours.

69. Have a midnight picnic at Cornell Plantations.

70. Find an empty classroom or overlooked nook. Make it your go-to study spot.

71. Try to locate the Cornell references in books by Kurt Vonnegut ’44 and Thomas Pynchon ’59.

72. Have breakfast with new president Elizabeth Garrett. Ask her if she’s going to finish her blueberry muffin.

73. Sit quietly amid the stained-glass serenity in Sage Chapel.

76. Audition to be a chimesmaster, if only to play a note or two.

77. Locate a bootleg of the Grateful Dead’s famous Barton Hall concert from May 8, 1977. Sneak into Barton late at night and press “play.”

79. Go to the Rare and Manuscript Collections in Kroch Library and get a gander at the Gettysburg Address.

80. Kiss your significant other on both suspension bridges, not just the famous one, but the one over Fall Creek near the Plantations.

83. Get a staff member to guide you through the underground tunnel between Olin and Uris libraries.

84. Debate a professor about a philosophical matter. Agree to disagree.

85. Skate at Lynah Rink. Imagine the crowd cheering you on as a Big Red hockey star.

86. Learn verses of school alma maters—Vanderbilt, Georgia, Xavier—that use the same tune as Cornell’s. (“On the city’s western border, reared against the sky . . .”)

87. Invent your own mixed drink.

88. Scrutinize the century-old caricatures of professors carved into the beams of the Straight’s Memorial Room.

89. Sit in on a lecture just because you happen to be passing by.

90. Dress up and do the “Time Warp” at The Rocky Horror Picture Show in Risley Hall.

91. Be a Big Brother or Big Sister to an Ithaca kid in need.

92. Bury a bottle of liquor somewhere on Libe Slope in January; try to find it in May.

93. Find a boisterous group of Homecoming tailgaters who are at least a generation older than you. Join them.

94. Slay the dragon on Dragon Day.

98. Gape at the nineteen-foot-long reticulated python skeleton at the Museum of Vertebrates in the Lab of Ornithology.

100. Stay in Ithaca over a vacation. Walk around campus like you own the place.

101. Test your skills at the nine-hole Robison Disc Golf Course—or create your own course out of campus icons.

102. Go ghost-hunting for Alice Statler and Prudence Risley in their namesake buildings.

103. Brag about the big brains at Cornell. Prove it by showing a visitor Mr. Rulloff’s in the Brain Collection.

104. Eat at the student-run restaurant in the Statler Hotel. Watch a Hotelie pal try to manage his once-a-semester “management night.”

107. Visit the Risley dining room and imagine yourself at Oxford’s Christ Church Refectory, the inspiration for its design.

108. Go to a Board of Trustees meeting and offer your two cents.

109. Design your own sandwich at Collegetown Bagels. Submit it for menu consideration.

110. Look up an old photo of Davy Hoy and T. F. Crane. Finally figure out who you’ve been giving your regards to all this time.

111. Ski downhill at Greek Peak and cross-country at the Cornell Plantations.

112. Take Intro to Wines. Learn how to spit properly. Take your parents out to dinner and impress them.

113. Touch a meteorite on the third floor of Space Sciences.

114. Follow the Sagan Planet Walk, a scale model of the solar system—from the sun on the Ithaca Commons to Pluto at the Sciencenter.

115. Walk to a fraternity party in the freezing cold, along with most of your freshman floor.

116. Get denied by a bouncer who happens to know the person on your fake I.D.

117. Sell your textbooks at the end of the semester. Spend the money in one night at The Nines.

118. Stand under a giant whale skeleton at Ithaca’s Museum of the Earth.

119. Rappel, zipline, and climb a replica McGraw Tower at the Hoffman Challenge Course.

120. Volunteer as a model in the annual Cornell Fashion Collective Runway Show. Own the catwalk.

122. Have an epiphany about the meaning of life. Change your mind several times.

123. Find a vintage letter sweater. Wear it with pride.

125. See how many people you can cram into your dorm room.

126. On International Spirit of Zinck’s Night, use video chat to celebrate with a group halfway around the world.

127. Pick a name from the war memorial in Anabel Taylor. Go learn more of the story.

128. Witness the rare blooming of the odiferous “corpse flower” in a CALS greenhouse.

129. Attend a lecture in Bailey Hall. Sit in the very back.

130. Attend another lecture in Bailey. Sit in the front row. 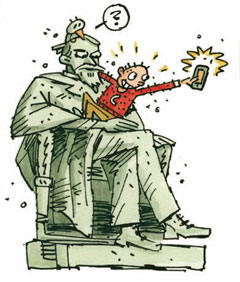 131. Create a wampum belt during a workshop at the Akwe:kon residence hall.

132. Binge watch every episode of “The Office” in which Andy Bernard mentions Cornell.

133. Walk out of a prelim with a dazed look in your eyes. Thank Ezra that it’s not a final.

135. Visit the campus farmers’ market, held on the Ag Quad every fall Thursday.

136. Check the time on the Engineering Quad sundial.

137. Spend a night in a solar-powered yurt on Mount Pleasant.

138. Read Charlotte’s Web by E. B. White ’21, then visit the seven million entomology specimens in Comstock Hall. Learn the difference between an insect and an arachnid.

140. Drive your own car on the famed race course at nearby Watkins Glen International—as a pace car during opening weekend in April.

141. Recruit a virgin to test out the Arts Quad statue handshake legend (or test it yourself).

143. Memorize the statement about coeducation that Ezra Cornell left in the cornerstone of Sage Hall.

144. Pretend you’re a rooftop fan watching a game at Wrigley Field—but make it a view of Hoy Field from atop Rhodes Hall.

145. Taste your way through the dim sum bar at Robert Purcell Dining.

147. Rush the field at the last home football game of the season.

148. Take Film 2850: Stardom. Get college credit for watching an episode of “Entourage.”

150. Jog to the Plantations. Ring the giant bell at Newman Overlook. Jog back.

151. Save every Big Red hockey ticket stub. During Senior Week, compare the total to the number of parking tickets you’ve amassed.

152. Spend the summer in Ithaca. Then spend the fall constantly telling your housemates how beautiful and peaceful it was.

153. Wear out your “Ithaca is Gorges” T-shirt and replace it with a sardonic version (“Ithaca is Cold”; “Ithaca is Gangsta”).

154. Take the Pinesburger Challenge at the Glenwood Pines restaurant.

155. Measure your emotions at the “mood cloud” art installation in Gates Hall.

156. Hike to all twelve waterfalls at Treman State Park.

158. Don’t graduate until you’ve seen The Graduate at Willard Straight.

160. Write a letter to your parents—with pen and paper—and thank them for everything.