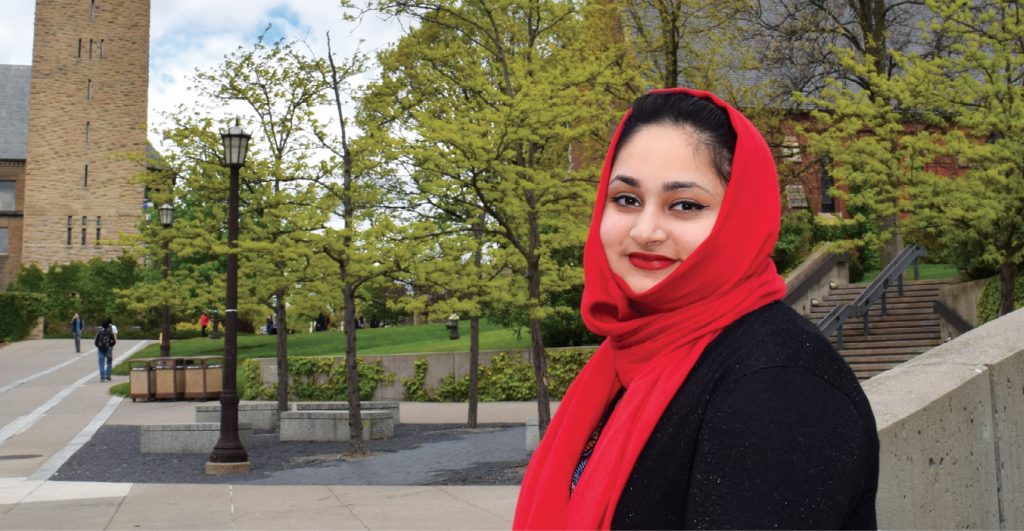 When I first started wearing the hijab at age eighteen, I had no idea I was making one of the most important decisions of my life. It hasn’t always been easy, and there have been many times I’ve wanted to stop. But over the past two years, I’ve become more conscious, more confident, and certainly more proud of who I am. And I’ve learned that the more you resist giving up on something, the more meaningful your connection to it becomes.

Commonly known as the headscarf, the hijab is a form of purdah (covering) that some Muslim women adopt. But the hijab is more than just wearing a piece of cloth—it’s also how you present yourself. To me, and to many other Muslim women, the hijab is a means of elevating aspects of your personality, character, and intellect over your physical beauty. It’s both a symbol of modesty and of power. Some women style it as a turban, others wear it loosely; some show a bit of their hair, others cover everything except their eyes. There are no official rules, and the concept of modesty is up to interpretation.

When I started wearing the hijab—just before I matriculated at Cornell—everything about it felt wrong. Walking around campus my first few weeks on the Hill was intimidating to say the least. I remember simultaneously feeling like everyone’s eyes were on me and like nobody wanted to look at me. I often felt isolated, just because of what I was wearing on my head.

So if the hijab was so challenging, why didn’t I take it off? The answer has a lot to do with the reason I put it on in the first place.

I grew up in Texas, which many people might assume is a tough place to be a Muslim woman of color. But I never experienced explicit racism or Islamophobia—and I largely attribute that to the fact that I didn’t start wearing the hijab until after high school.

For many of the women in my life—my mother, my aunts, most of my close friends—this isn’t the case. They’ve been wearing the hijab daily since they were as young as thirteen, and they’re no strangers to prejudice. From them, I’ve learned that it takes courage to wear a symbol of your identity everywhere you go—particularly when, to some people, that symbol is a threat. So, for me, the decision to start wearing the hijab was daunting—not because I didn’t have any examples to follow, but because I didn’t think I could live up to them.

But as the political and social climate of the country increasingly turned against Islam, it felt more and more important for me to show I was a Muslim and proud of it. Putting on the hijab felt like a form of protest, an unapologetic display of my identity in the face of a country trying to silence it. Wearing the hijab also felt like a way to defy the stereotype of Muslim women as oppressed, powerless, and submissive. And as I was leaving for college, where I’d have a chance to start fresh, the time felt right.

Naturally, this all seemed easier in theory than it has been in reality. Until I started wearing the hijab, rude people were just rude, nothing more. It was relatively painless to attribute their behavior to a bad mood; I never had to question whether they had something against me in particular. But since I donned the hijab, whenever a cashier stops smiling as soon as I get to the register or a bus driver says good morning to everyone but me, I’ve had to wonder if it’s because I’m obviously Muslim.

As hurtful as these incidents can be, I’ve eventually come to realize that if people are prejudiced or intolerant, it’s their problem and not mine. And for every rude interaction, I’ve encountered the opposite: someone has started a conversation with me, expressed curiosity about my background, or just given me an understanding smile. What’s more, I sometimes feel the hijab opens up opportunities for me when it comes to applying for things like internships or leadership positions on campus. I’m often the only candidate who’s clearly Muslim, and because of that—at least at Cornell—my perspective is valued.

Most importantly, however, I think that the hijab has taught me a lot about myself. I used to think I was an innately confident person, but I’ve realized that being confident is easy if you’ve never truly been tested; the real challenge is staying strong when you’re scared or uncertain. Wearing the hijab reminds me that I’ve earned my confidence.