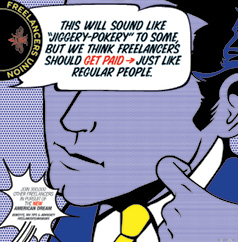 Images from a New York City PR campaign launched by the Freelancers Union.

Sara Horowitz ’84 has unions in her blood. Her grandfather was vice president of the International Ladies Garment Workers Union, specializing in organizing at companies who’d moved out of New York to escape labor regulation. Her dad was a union lawyer, her mom a unionized teacher. In a bit of happenstance that makes Horowitz smile, her daughter shares a birthday with Samuel Gompers, legendary founder of the American Federation of Labor.

When it came time to make her own mark on the labor movement, the ILR grad tackled an issue that’s both contemporary and perennial: protecting the interests of independent workers. In 1995, Horowitz founded what’s now known as the Freelancers Union, an association that has grown to comprise more than 250,000 members in the U.S. and abroad. An avid student of labor history, Horowitz sees parallels between the days before widespread unionization—when piecework dominated the garment industry—and the modern “gig economy.” “It’s not that different,” says Horowitz, who holds a JD from SUNY Buffalo and a master’s from Harvard’s Kennedy School of Government. “You could get all the material and work at home and have that flexibility—but you also had no unemployment insurance and none of the supports.” 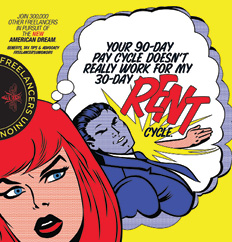 Based in Brooklyn, Horowitz’s group doesn’t function as a traditional union; it doesn’t bargain collectively, for example, and members don’t pay dues. Rather, it serves as a way for disparate, often isolated independent contractors to connect with each other and be part of a greater whole. While the group once offered its own health insurance, it was required under Obamacare to switch to serving as what Horowitz calls a “portable benefits platform,” streamlining access to other plans.

The Freelancers Union hosts monthly networking events, publishes a blog whose circulation Horowitz puts at two million readers, and offers guidance on topics from filing taxes to crafting contracts. Among its recent accomplishments is working with Uber to establish an association for its New York City drivers that’s affiliated with a branch of the International Association of Machinists and Aerospace Workers union. The group has also rallied support for a workers’ protection bill now under consideration by the City Council—the “Freelance Isn’t Free Act”—that aims to address the chronic problem of unpaid fees. “More than 70 percent of freelancers have been stiffed at one point in their career,” Horowitz points out, “and the average amount is more than $5,000.” 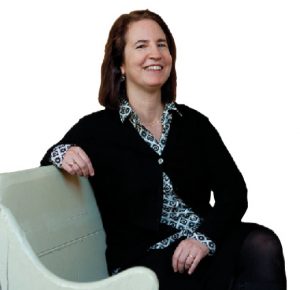 In fall 2015, a study that the group commissioned from an independent research firm estimated that just over a third of the U.S. workforce—some 53.7 million people—are freelancers. The majority of them—60 percent—reported they were freelancing by choice, a trend that Horowitz ascribes to the declining numbers of traditional full-time jobs with generous benefits. “People gave up a lot for that forty-hour workweek,” observes Horowitz, who co-authored a how-to guide entitled The Freelancer’s Bible in 2012. “Now, people are saying, ‘Show me those mythical jobs with a great pension and retirement, and I might be happy to give up this flexibility, but that choice isn’t available to me anymore.’ So people are putting their lives together in a different way.”

Horowitz’s work has landed her on a slew of best-of lists, with kudos from the likes of Forbes, BusinessWeek, and the World Economic Forum. But the ultimate honor came in 1999, when—at thirty-six—she received a fellowship from the MacArthur Foundation, its vaunted “genius” grant. “Sara has always been a creative and committed person in everything she does,” says ILR professor Risa Lieberwitz, one of her Cornell mentors. “She’s an optimist—and you need to be to look at today’s world with all its problems and try to improve the situation for as many people as you can.”