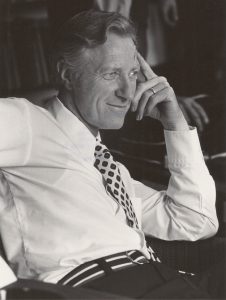 The Cornell community is mourning the loss of its beloved president emeritus Frank H.T. Rhodes, who passed away in February at age ninety-three. Cornell’s ninth president—as well as a prominent paleontologist and a national figure in higher education—Rhodes led the University from 1977 to 1995. For many Cornellians, he was a quintessential part of the institution: at the time of his retirement, not only was he the longest-sitting president in the Ivy League, but almost half of Cornell’s then nearly 123,000 living undergraduate alumni had attended during his presidency. “Frank Rhodes was a brilliant scholar and a gracious leader who was not only deeply respected, but truly loved by generations of Cornellians,” says President Martha Pollack. “His boundless curiosity, his kindness and humor, and his sage leadership shaped Cornell as we know it today, as his wise and generous mentorship shaped the lives of the countless students, faculty, and staff who passed through Cornell during his tenure.”

To many Cornellians, Rhodes was the embodiment of everything a college president should be: erudite, compassionate, affable, extraordinarily eloquent, interested in a broad range of topics, and capable of addressing the most minute detail while keeping an eye on the big picture. Within days after the University announced his passing, a memorial website had drawn more than 200 fond remembrances—with alumni, staff, parents, and others reminiscing about his warmth, brilliance, and uncanny ability to remember a person’s name even years after a casual meeting. Many cited advice he’d given them in person or during his much-admired Commencement speeches, which he concluded with the traditional Irish blessing:

“May the sun shine gently on your face
May the rain fall soft upon your fields
May the wind be at your back
May the road rise to meet you
May the Lord hold you in the hollow of his hand
Until we meet again.”

Born in Warwickshire, England, in 1926, Rhodes—his middle initials stood for Harold Trevor—earned his bachelor’s, doctor of science, and PhD degrees in geology from the University of Birmingham. He taught at various institutions in the U.K. and U.S. before joining the geology faculty at the University of Michigan in 1968, rising to vice president for academic affairs before being tapped to succeed Cornell President Dale Corson. “Frank Rhodes taught all of us, especially those of us who had the privilege to work with him, how to lead and how to inspire,” says Susan Murphy ’73, PhD ’94, vice president emerita. “He did that by his integrity, his grace, and his personal warmth. When you interacted with Frank, you felt as if you were the only person who mattered at the time. . . . Our lives are richer because Frank Rhodes was part of them.”

Rhodes is survived by Rosa Rhodes, his wife of sixty-seven years; four daughters, including Penelope Rhodes McDonald ’84, BA ’95, and Deborah Rhodes, MD ’92 (who is married to Frederick Savage Groves, MPS ’89); eleven grandchildren, including Sarah Inglis ’01, Heather Inglis ’07, BA ’06, Kristen Inglis, PhD ’11, and Caroline Groves ’20; and one great-granddaughter. In his honor, Cornell has established the Frank H.T. Rhodes Memorial Fund—which, it says, “will be used to support undergraduate scholarships and ensure the University remains accessible to students from all backgrounds.”

The reminiscences on the following pages were drawn from the University’s memorial website, cornell.edu/frank-rhodes. They have been edited and condensed.