A purple cabbage as big as a bowling ball sits on a shelf behind the desk of Mitchell Davis ’91. It’s a weekday in October, and Davis has picked up the spherical vegetable at the Union Square Greenmarket in Manhattan on the way to work that morning, intending to braise it later for dinner. Says Davis: “I’m someone who thinks about food constantly.” 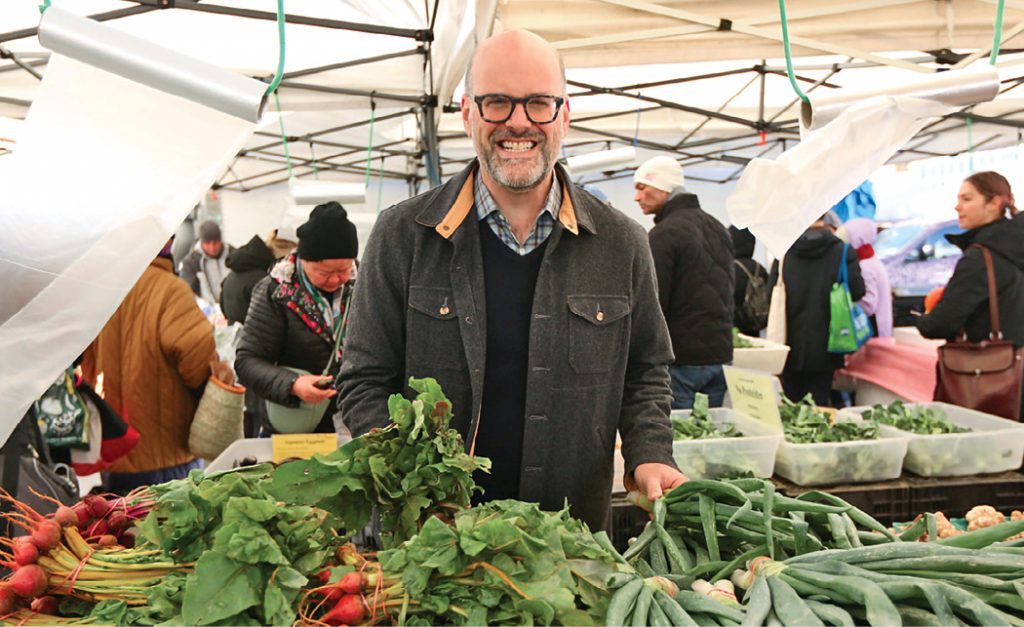 It’s both his avocation and his vocation as chief strategy officer for the James Beard Foundation, a nonprofit best known for presenting the awards that are considered the Oscars of the food industry. Davis, who has worked for the foundation for more than a quarter-century, is on Twitter and Instagram these days, but he has always been an influencer—as a writer, an intellectual, and a chef who trained in France and Italy. Today, he seems to know everyone and everything in the food world. “If you know Mitch, you don’t need Google,” says retired Hotel professor Tom Kelly, Davis’s longtime friend and mentor. “He’s a foodie’s foodie.”

In 2015, Davis earned international recognition by directing the USA Pavilion at the Milan Expo—a world’s fair for food. He is the author of three cookbooks that are as comprehensive as they are folksy and practical: The Mensch Chef: Or Why Delicious Jewish Food Isn’t an Oxymoron (his collection of Jewish classics including beefy beet borscht, basic brisket, and challah French toast); Kitchen Sense: More Than 600 Recipes to Make You a Great Home Cook; and Cook Something: Simple Recipes and Sound Advice to Bring Good Food into Your Fabulous Lifestyle. Davis also co-authored two books with chefs that garnered international acclaim: My Provence, an interactive digital cookbook, and Foie Gras: A Passion, a reference book with recipes that won an award for best international cookbook of the year in 2000.

Davis’s many appearances in the culinary media include serving as a judge on the Food Network’s “Best in Smoke” barbecue competition and preparing Bobby Flay to go up against “Pioneer Woman” Ree Drummond on an episode of Flay’s “Throwdown.” For three years he hosted Taste Matters, a show on the Heritage Radio Network. Last fall, he was a guest on a podcast hosted by Momofuku’s David Chang; their conversation zinged from the American gastronomic zeitgeist to eighteenth-century French food criticism—the subject of Davis’s doctoral thesis at NYU.

Davis knows that the culinary world is remarkably accessible these days, thanks to apps like Instagram and websites like Food52. But even as social media has popularized taco trucks and Michelin-starred restaurants alike, he worries that this splashy presentation is dehumanizing. “One of our missions—my personal mission—is to push back on, ‘Isn’t this food thing great?’ To complicate it a little bit,” says Davis, whom The Forward has named to its “fifty under fifty” list of the most influential Jews in America. “What puts the meal in front of you is a tremendous global system that has a lot of problems right now.” Among them: U.S. immigration policy, fair wages, and sustainability amid climate change.

Under Davis’s leadership, the Beard Awards—whose categories include best new chefs, restaurant design, and cookbooks—have emphasized not just gastronomy or aesthetics but issues of social responsibility, such as whether a chef promotes diversity in hiring and maintains ethical workplace policies. The foundation’s new tagline is “Good food for good,” but Davis wants to deconstruct that. “We have an opportunity to redefine what ‘good food’ means,” he says. “We could make American food culture sustainable. We could make it that in some way, ‘good’ implies that people are paid well along the chain. It’s not about food, it’s about people and the values we choose to live by.”

Last fall, the Beard Foundation hosted its first Chef Action Summit at Princeton, bringing together alumni of the foundation’s nineteen Chefs Boot Camps for Policy and Change, retreats that educate chefs and empower them as leaders. Davis moderated a panel on media and participated in a breakout session about mental healthcare among restaurant workers. He was invigorated by the conversations, yet remains realistic. “People just want to eat; they don’t want to know anything,” he says, quoting a note he’d scribbled in the margin of a conference paper, then added: “We need to acknowledge that and change it anyway.”

Davis has been cooking since he was a child growing up in Toronto. At age ten, he got a copy of Julia Child & Company, the cookbook from the TV show he watched when feigning illness to stay home from school. By eleven, he’d made every dish and menu—including “Dinner for Nineteen.” As a teen, he worked in a kosher-style butcher shop and had a side hustle: he’d take home bones, make chicken soup, and deliver it to customers on his way to school, with the shop letting him keep the proceeds. His family didn’t want him to become a chef, so he compromised by choosing Cornell’s Hotel school, broadening his education by taking twenty-six credits per semester (more than twice the minimum of twelve); his favorite non-Hotel class was a seminar where he read philosopher David Hume. Says Izabela Wojcik ’91: “He was the older, wiser, deep-thinking soul.” Wojcik is now director of events at the James Beard House, where chefs are invited to cook for special parties; she and Davis have been friends since their undergrad days. She recalls Davis throwing an elaborate Alice in Wonderland-themed dinner party for his Cornell housemates. “He’s always been on a grander scale than the rest of us dare,” Wojcik adds.

Davis spent his junior year in Paris, taking classes at the Sorbonne and doing a month-long stage (cooking internship) at the landmark La Tour d’Argent restaurant, which then had three Michelin stars. Returning to Ithaca for his senior year, he worked at Just a Taste, a popular tapas-style restaurant downtown. Davis says he was inspired to be a writer from Kelly’s class on restaurant criticism, co-taught by Mimi Sheraton, the first female food critic for the New York Times. For that class, he wrote an unflinching takedown of the iconic Moosewood Restaurant—panning its food, service, and environment. (“It was a horrible restaurant,” he says, matter-of-factly.)

Davis lived and cooked in Italy for a year after graduation, then returned to the U.S. to be executive editor of Art Culinaire, a quarterly magazine. He became the Beard Foundation’s director of publications in 1993 and has steadily risen through the organization. Sheraton credits him with expanding the foundation’s mission beyond the hedonism of food. “He’s just a good man,” says Sheraton, who recently attended a brunch Davis hosted with his husband, a physician at Mount Sinai. “He’s not a snob, he’s not full of himself. He’s friendly and loves to entertain.”

Davis enjoys cooking so much that he’s very particular about eating out in New York. He loves the spice and comfort of Xi’an Famous Foods, known for its hand-ripped Chinese noodles, and Atoboy, a Korean bistro run by a husband-and-wife team where he’s a regular. “I’m not looking for the next Instagram sensation,” he says. “I prefer things I can’t do that are just interesting and soulful in some way. They don’t have to be fancy; they just have to be good.”

This baked macaroni and cheese was a staple in my family while growing up. It never had a name so we always called it just “the cheese thing.” The secret is to use two kinds of cheddar—sharp for flavor, mild for texture—and not to grate it, but to cut it into cubes so the cheese melts into pockets of gooey goodness between the noodles. The Cheese Thing is good in every form, whether just put together, hot out of the oven, cold the next day, or heated up as leftovers. For best results, get it ready to bake the night before you plan to serve it. This way, the noodles absorb some of the tomato juice and the whole thing melds to produce a delicious (and simple) macaroni and cheese.

Bring a large pot of salted water to a rolling boil and cook the pasta until just slightly underdone, about 2 or 3 minutes less than the package says (the pasta will finish cooking in the oven). Meanwhile, cut the cheese into half-inch cubes. Roughly chop the tomatoes and keep them with their juice. When the pasta is cooked, drain it in a colander, but do not rinse. Toss the pasta back into the cooking pot. Add the butter and stir until melted. Add the cubed cheese, chopped tomatoes and their juice, sugar, and salt and pepper. Stir to combine. Transfer this mixture into a two-quart baking dish (Pyrex works well). Pile any excess on top; it will hold. If you have the time, cover with plastic wrap and refrigerate overnight.

Preheat the oven to 375 degrees and bake for 45 minutes to an hour, until the noodles on top have browned and crisped and the casserole is bubbling.