Robin and I first met Jim Roberts ’71 four days after my appointment as Cornell’s twelfth president, when he flew to Iowa City to interview us for an article that appeared in the March/April 2006 issue of Cornell Alumni Magazine. Jim asked all the right questions—about our impressions of the University and my goals as president, and also some hard-ball questions about challenges I would face. We liked him immediately; he was smart, professional, and clearly committed to Cornell, but with an independent, critical spirit. It was the start of a wonderful partnership that has continued throughout our time together.

I owe Jim an enormous debt, not only for making these columns a regular feature of CAM, but also for being endlessly tolerant of my requests for deadline extensions—which is how, with the surreptitious help of his colleagues, we managed to keep the content of this column secret until it was too late for him to object. 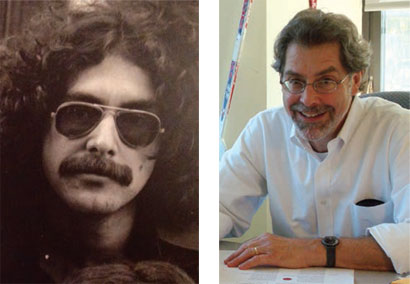 Jim came to his career in journalism by a somewhat circuitous route. After earning a BA in government, he moved to Massachusetts to follow his passion for music. He worked as a bass player in several rock and R & B bands, supplementing his musician’s wages by writing about music, first for local publications and then for national music magazines.

When the opportunity arose to serve as founding editor of Bass Player magazine in 1989, Jim—by then married to Dr. Susan Strahosky and the father of two-year-old Miles (named after Miles Davis)—moved his family to the San Francisco Bay Area and accepted the job. He soon became group publisher of Bass Player and four other specialty magazines for Miller Freeman Inc.

A decade later, the time seemed right for another career change. After answering an ad in CAM, Jim (along with Susan, Miles, and daughter Nadia, who had joined the family from Central Russia in 1997) came back to Cornell as director of communications for Alumni Affairs and Development. The following year, Jim became editor and publisher of CAM—at a time when the magazine was deeply engaged in soul-searching about how best to connect with the alumni body.

Cornell’s leaders laud Jim’s vision and accomplishments. Jim Mazza ’88, associate vice president for alumni affairs, notes that he has strengthened the magazine’s content and visual appeal, making it a publication any Cornellian would be glad to read and have on the coffee table. His addition of digital and mobile versions of CAM has offered an important new dimension to the magazine. And, as Charlie Phlegar, vice president for alumni affairs and development, noted, “Even during difficult discussions about the magazine’s future, Jim was always professional and weighed all sides of the arguments, which kept the conversation moving forward in a positive way. He is an editor of great integrity—fair and thoughtful—and an alumnus with a lively commitment to Cornell.”

In fact, Jim is a third-generation Cornellian, while Susan received her degrees from Boston University. And the entire family enjoys music and sports, which makes for some interesting dynamics. As Jim tells it, Miles played several sports in high school and wanted to go to a large research university with a great hockey tradition whose colors were red and white—but it turned out to be his mother’s alma mater. Those split loyalties have invariably complicated seating arrangements at the fall hockey matchups between the two teams in Madison Square Garden.

When Jim retires as editor and publisher in September, he and Susan will move back to New England with daughter Nadia, who will be looking at college options. Susan will take on a new position at a hospital in Manchester, New Hampshire, continuing her work in developmental-behavioral pediatrics. And Miles is already in New England, working as assistant athletic director and sports information director at Pine Manor College in Boston. I understand that Jim plans to freelance, doing music journalism and other writing as the spirit moves him.

Jim, it’s been a rare pleasure. I couldn’t have asked for a better editor, colleague, and guide to Cornell—and I know I speak for the CAM readership in thanking you for your extraordinary service. We’ll be looking for you the next time the Big Red plays BU in Madison Square Garden, and will take careful note of which side you’re sitting on!