Vincent “Vin” Rogers ’49 caught jazz fever in a New York City high school band and brought a potent strain of it to Ithaca in his trumpet case in 1944. The outbreak of World War II had transformed campus into something resembling a military base, Rogers recalls—but he was soon jamming with fellow musicians in Willard Straight Hall and eventually joined a combo that played on campus and downtown, even touring to the Catskills and Adirondacks.

Despite Cornell’s distance from urban centers, in those days it was well positioned to nurture jazz—the art form that one of its most esteemed critics, Whitney Balliett ’49, BA ’51, would famously describe as “the sound of surprise.” English professor Marshall Stearns, a medievalist who penned The Story of Jazz (published in 1956 and still in print today), had close connections with music industry insiders. He helped found the Cornell Rhythm Club, a jazz-centric group of faculty, students, and locals who booked the likes of Dizzy Gillespie, Duke Ellington, Ethel Waters, the Dave Brubeck Quartet, and Charlie Mingus to play on the Hill. During his student days, Balliett wrote jazz and film columns for the Daily Sun and Cornell Widow; he would later become a critic at the New Yorker, a post he held for half a century. “It’s remarkable when you put all the pieces together,” says Rogers, who still plays trumpet every day at age ninety-one. “Cornell was a hothouse for jazz, and I just walked right into it.”

In October 1947, Gillespie and his eighteen-piece orchestra headlined Bailey Hall’s first-ever purely jazz program. Yes, popular big bands led by Benny Goodman and Glenn Miller had previously played in other venues on the Hill. But Gillespie’s show—followed by one by Duke Ellington’s band in 1948—was held in a concert hall usually reserved for classical music, and it marked Cornell as a welcome place for innovative jazz artists. (Gillespie’s performance was made into a double album, Dizzy Goes to College, Vols. 1 & 2; Ellington’s was released as The Great Concerts: Ellington Plays Cornell 1948. Both are considered collectors’ items by jazz aficionados.) “Those concerts were the thrill of a lifetime,” says Rogers, who reached out to CAM last spring to share his reminiscences of the Gillespie show, more than seven decades later. He also described meeting Ellington band members at an Ithaca jazz club where his own group performed regularly. “We saw them come in and I cued the band to play an Ellington piece,” he recalls. “We were hot. Afterwards, one of the band members slid me a drink at the bar and said, ‘Man, you got a great sound.’ That was a magical moment.” When Gillespie returned to the Hill in 1991, Rogers attended a performance and some of the student clinics he conducted, calling the experience “another moment I’ll never forget.” 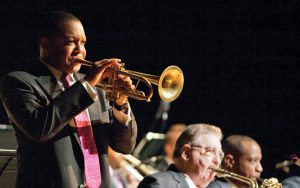 Just as the Gillespie and Ellington shows were highlights of Rogers’s Cornell career, a visit by Wynton Marsalis (currently an A.D. White Professor-at-Large) made a major impression on another Cornellian—one who’ll graduate seventy years after Rogers. Troy Anderson ’19, a bio major who plays saxophone and clarinet with the Cornell Jazz Ensembles, had the chance to perform with Marsalis and take a master class with him last spring—and it changed his whole approach to jazz. “Before his visit, I played and read the music and that was great, but he invited us to go deeper,” says Anderson, who reminisced about the experience during an event hosted by President Martha Pollack at Reunion 2018. “He skillfully described the cultural setting of the music, its origins, the current culture of its time, and the challenges musicians faced. He encouraged us to not only play the music, but to listen to the original recordings and players, and to follow the growth of the music from its original source. It was inspired.”

“Over 3,000 couples attended the Navy Day Ball in the Drill Hall last night and danced to the music of the Benny Goodman and Joe Haymes Orchestras,” said the Daily Sun. “Goodman’s quartet proved to be the most popular feature of the evening.”

The “First Lady of Song” was twenty-one when she appeared on the Hill with the Chick Webb Orchestra—a long way from New York’s Savoy Room, where they were a house band. After Webb died in 1939, Fitzgerald led the group under the name Ella Fitzgerald and Her Famous Orchestra.

In 1939, the Duke and his orchestra serenaded dancers at Cornell’s junior prom; the 1948 performance prompted Balliett to write in the Sun that Ellington’s music “was little short of impeccable,” and that “twenty years of leadership in the field of jazz has not jaded the Duke.”

In 1939, Miller and his orchestra appeared in Barton. Their vocalist, Marion Hutton—then just seventeen—went on to appear in movies with Abbott and Costello and the Marx Brothers. Miller was good-natured about being swamped for autographs; as he told the Sun, “When no one wants your autograph you feel badly, so that when someone asks for the honor of having your autograph you should be pleased and give it willingly.”

The 1955 concert, with the Modern Jazz Quartert, was intended to highlight a contrast in styles. “[Basie’s] music arrangements are read right off the paper,” said the Sun, “[while] the smaller modern group . . . depends largely on individual impressions the musicians give to the music.” In other words, the quartet—hailed as part of jazz’s new cool, intellectual, progressive movement—improvised a lot.

Best known for the hits “Stormy Monday” and “Dinah,” Waters was a singer and actress who performed jazz, big band, and pop. (She was also the second African American woman nominated for a Best Supporting Actress Oscar, for the 1949 drama Pinky.) Williams, a well-known jazz pianist, accompanied Waters on piano for their “Concert in Blue.” The Daily Sun opined that “Miss Waters has a relatively thin voice, inclined to shake on the low notes and to break on the high ones. Nevertheless, her great personality and intimacy with the audience created many happy moments for the packed house.”

The artist nicknamed “Satchmo” brought his golden horn and gravelly voice to Bailey for a 1953 show with his “All Stars.” “Some of these bop band leaders come to the universities and talk about modulation this and cappeggio that, and nobody’s with ’em,” he told the Sun during a backstage interview. “When I come, I just play, and they’re with me all the way.” In 1963, Satchmo returned to Bailey for a event benefitting the annual Campus Chest charity drive.

After the 1956 show in Bailey, Brubeck said that Cornell was a highlight of their tour and praised the venue. “It’s a big hall, but intimate,” he told the Sun. “The audience was right with us all night, a swell bunch of kids. The acoustics and lighting were great. And that piano. I loved it!”

McRae made two appearances at Cornell, first with Coleman Hawkins’s band in 1958 and four years later with her own trio. Although critics considered her one of the top jazz vocalists of the day, the Sun felt the ’62 show was flat. “Jazz suddenly finds itself popular, and charges money to perform on formal stages and in concert halls,” the review said. “But not all jazz is capable of the transformation. It puts on a dress that looks somehow wrong, teeters onto the stage in high heels, and then gesticulates in a style not of the stage, but closer to the smoky dives of New Orleans.”

Simone cast her moody spells in two Bailey concerts, delivering her signature mix of folk, blues, and jazz. In 1963, she shared the bill with Herbie Mann, a flautist whose compositions tapped Afro-Cuban and Brazilian rhythms. Her 1965 appearance with her own trio “reaffirmed her greatness as a folk and jazz interpreter” according to the Sun. “Miss Simone is an unparalleled master of vocal dynamics. With her repertoire of essentially Afro-American folk blues she taunts, teases, begs, and commands the listener to grasp her music.”

Mingus was a big hit, both as performer and lecturer. The Sun described his compositions as “the epitome of jazz,” and his workshop so intense the session was extended by an hour. Mingus stayed on campus to give a talk titled “Jazz, an Expression of What?” According to the Sun, when Mingus finished speaking, “hardly anyone went home. Instead, they all climbed onto the Statler Hall stage and crowded around the small table where Mingus was sitting”; some students asked him questions about music, about race relations, and “about love and hate.”

The inaugural concert of the Cornell Jazz Festival in Barton brought together two masters—Monk, the eccentric pianist-composer, and Mulligan, then considered a monster on the sax. Of the former, the Sun wrote: “His sound, his technique, his music is so uninfluenced [by other composers] and so much a part of the man, that it never sounds like anything but Monk.”

The famed innovator of cool jazz was in his “electric” period—not his most popular sound. His experiments during this phase polarized fans, driving many away. Advance sales for the Bailey concert were poor, and a twin bill was cut to one early evening show. Two years later, Davis dropped out of the music scene, kicked a cocaine habit, and re-emerged in the Eighties to reclaim his title as a jazz legend.

For his shows in the Seventies, the renowned pianist and composer shared the bill with fellow jazzmen—first Gary Burton, then Larry Coryell. Despite a poor turnout for the 1985 show with his Elektric Band in Bailey on a Sunday night, the Sun said that Corea “poured energy into a performance well worth the ticket price.” A highlight was when Corea gave the audience a brief music lesson and led “a powerful sing-along.”

The Cornell Concert Commission has brought Wynton’s saxophonist brother to Bailey several times; for the 1996 show, he shared the bill with their father, jazz pianist Ellis Marsalis. Most recently, he performed on the Hill during the 2005–06 Concert Series.

10 thoughts on “All That Jazz”