In 1994, Willie James Jones III looked forward to a promising future. The eighteen-year-old son of two hard-working parents living in a lowincome neighborhood in San Diego, he set an example to those around him by avoiding the gangs and drugs that so often attracted his peers. He was class valedictorian, student-body president, and a wrestling champion, competing in the state finals. He was courted by several top schools, decided on Cornell, and was admitted early decision. His plan was to wrestle, study biology in the College of Human Ecology, become an obstetrician, and return home to help the people in his neighborhood. He would urge his fellow graduates, according to the Los Angeles Times, “to never lose sight of their dreams.” 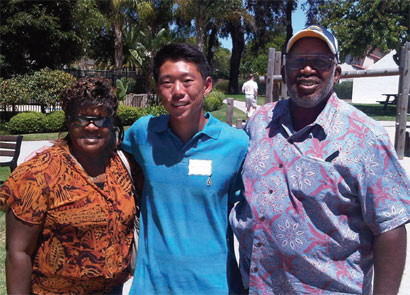 As he and friends were leaving a graduation party—one that was chaperoned by parents and where alcohol was prohibited—a car drove by and sprayed the crowd with bullets. Jones was killed, just days before he was to leave for Cornell’s pre-freshman summer program. His funeral drew more than 1,500 people. Cornell’s wrestling coach, Rob Koll, attended. Jones was buried in his graduation robe.

The story drew much attention in Southern California, where it took more than fifteen months before arrests were made in his murder. The street in front of his high school was renamed for him. An annual sports award for a local athlete is given in his memory. A wrestling tournament bears his name.

In 1996, Stuart Lourie ’69 had just moved to San Diego when ABC News aired a documentary on teens lost to gang violence, with the Jones story as its focal point. A couple of years later, when Lourie became scholarship chair of the Cornell Club of San Diego, he saw an opportunity to memorialize a young man who would have made an exceptional Cornell student. “What inspired us about the Willie Jones story is that he could have gone anywhere, but he chose Cornell,” says Lourie. “We had to do something to remember him, so we created what is believed to be the first scholarship fund in honor of a Cornell student who never attended.”

The Willie James Jones Memorial Scholarship was launched in 1998; since then, eleven students have been given financial aid to attend Cornell, thanks to the club’s efforts. The award offers $4,000 in aid for students in their freshman and sophomore years.

The first time the award was given, the ILR school matched the scholarship amount. That recipient, Daniel Powell ’02, knew Jones; Powell’s brother was in the same honor society for black males and would often bring Jones to the Powell home. Powell told the San Diego Union-Tribune in 2009 that to him, Jones was a “rock star.” He admitted he was on the wrong path prior to Jones’s death, but was inspired to turn his life around. As Lourie recalls, when Powell got the scholarship, he said, “Willie couldn’t go to Cornell, but I’m going to go in his place.”

Each year, Lourie works with the Development office to get a list of incoming freshmen from the San Diego area in need of financial aid. They ask potential recipients to write an essay about what they admired most about Jones; then Lourie, the scholarship committee, and Jones’s parents select the recipient based on the qualities the young man exemplified— leadership, scholarship, and community activity. Each summer, the Joneses attend the club’s annual student send-off to recognize the recipient. “Willie Jones was a first-class kid,” said Lourie. “He was the kid who was coming back to San Diego to change the world. His parents say to us, ‘Thank you for remembering our son.’ They had such high hopes for him.”

Scott Pesner is a vice president of the Cornell Alumni Association.

It’s Time to Cast Your Ballot

By now, you should have received information on this year’s slate of alumni-elected trustees. Alumni are asked to vote for two of the following four individuals:

Statements from these candidates can be found at alumni.cornell.edu/trustees.

Cornell is one of the few major universities whose alumni elect members to its Board of Trustees. Each year, the Committee on Alumni Trustee Nominations considers a broad range of alumni leaders to be placed on the ballot.

It has been my honor and privilege to serve as your alumni-elected trustee over the past four years. What a time in Cornell history! After being buffeted by the Great Recession, and courageously swallowing the tough medicine of austerity, Cornell is now sailing forward with the wind firmly at her back. Some brief highlights:

Setting the course forward: Cornell developed its rigorous and comprehensive strategic plan—aiming to have Cornell ranked as a top-ten research university. The plan (www.cornell.edu/strategicplan/) sets the bar high in critical areas as we approach the 2015 sesquicentennial. We are making steady, measured progress toward meeting our goals.

Renewing our faculty: We are aggressively hiring the best and brightest upcoming scholars to replace retiring veteran faculty.

There’s much more to tell than space allows. Be assured, Cornell is led by an extraordinary president and a fantastic set of deans and administrators—guided by a truly terrific, dedicated, and hardworking Board of Trust – ees. I’m humbled to play my part (vice chair, Audit Committee; member, Cornell NYC Tech Task Force; vice chair, Cornell Annual Fund; and with my wife, Pamela, co-chair, Tower Club).

Thank you for giving me this tremendous opportunity; it is a joy to serve our noble alma mater.

In preparing to write my alumnielected trustee report, I looked back at the “platform” I ran on. My themes were:

In the last three and a half years I have seen progress in all three of these areas.

I joined the board in the summer of 2009, when the dominant topic of University business was the effect of the recession. Great care was taken to examine every area of the University and determine what actions were necessary to ensure that Cornell would remain a world-class research institution long into the future.

In 2010, the University created a strategic plan that will make Cornell one of the ten most distinguished universities, accessible to all. The plan requires that Cornell will be the “best choice” not only for its students, but also for our faculty and researchers. Being the best choice for prospective students requires that affordability of a Cornell education be addressed. Progress on this is reflected in the highly competitive student financial aid programs Cornell offers. To be sure, the cost of a Cornell education is still prohibitive to many, and trustees and administrators continue to deliberate over this challenge. Attracting the best faculty and staff requires focus on endowed resources and facilities. The current campaign priorities are the best evidence of this support.

“Moving faster and smarter” is best summed up by the expedited birth of Cornell Tech. In addition, the University is examining the potential role of online programming in education delivery. This would provide endless opportunities for individuals to access the worldclass learning that occurs at Cornell. We can truly be the “land grant university to the world.”

It has been an honor to serve the alumni community as their representative. I have had opportunity to witness the dedication and boundless energy of so many that work for Cornell, including the many alumni volunteers. It has been a privilege to serve by their side. Thank you.