For Architecture Grads, a Trip to Naples Follows a Roman Holiday

If you were in Naples, Italy, in May and saw a group of middle-agedmen and women wearing carnelian red and taking lots of photographs, you may be surprised to learn that they weren’t traveling with Cornell’s Adult University. They were mem bers of the architecture Class of ’72/’73—and the trip is becoming a tradition.

In 2009, Marty Powell ’72, BArch ’73, spearheaded the idea of a group trip of architecture grads as a way to bring his classmates together. “It was actually born out of sadness—several of our classmates had passed away,” says Powell. “So we wanted to do something happy.”

That led to a four-day trip to Rome in 2010 with many members of his class. The city was a logical choice because they were able to tie into the Cornell in Rome program, which has been part of Architecture, Art, and Planning for almost thirty years. Jeffrey Blanchard, the program’s academic coordinator, hosted walking tours; as his specialty is the Italian Renaissance, he was able to offer in-depth descriptions of Roman architecture as well as urban design. The trip helped strengthen their bonds to each other and to their alma mater, Powell says. “The glue was Cornell,” he says. “You remember the professors who stood up in front of you when you were twenty; they were impressive and instilled a love of learning And now that you’re sixty, you appreciate it more.” 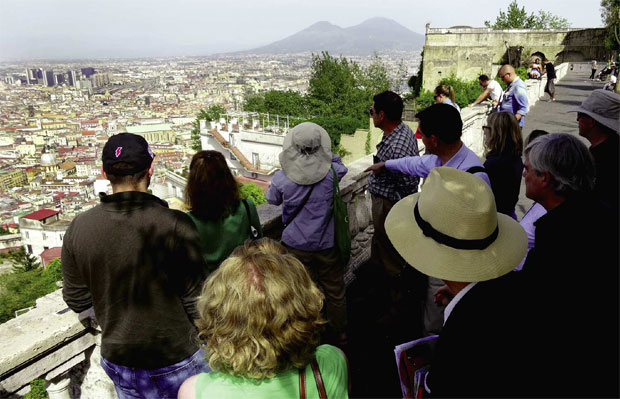 With Mount Vesuvius in the distance, the Cornell inRome program’s Jeffrey Blanchard points out features of the city of Naples from the plaza in front of the Castel Sant’Elmo.

For their return trip to Italy this spring, the group of twenty-five classmates and their spouses spent three days in Naples, “touring ancient streets, piazzas, galleries, churches, catacombs, museums, and art collections,” says Powell. The fourth day offered a side trip to Certosa di Padula and Paestum, led by Blanchard.

The trip takes a lot of planning. Individual classmates are given specific responsibilities, including restaurant selection and bus transportation. After the trip, travelers can upload photos to a Flickr account overseen by Bob Joy ’72, BArch ’73. “It’s about finding your friends, enjoying traveling, and the love of learning,” says Powell. “We have as much fun planning the experience as actually getting together.”

The program has gone beyond an alumni trip to become a fundraiser; any money left over goes into a class fund for use by AAP. The group is already planning its next trip, to Genoa and Turin in 2016.

What’s the Word From CACO?

Excitement is the watchword among board members of the Cornell Association of Class Officers (CACO). This year CACO introduced and refined more than twenty initiatives to better serve the 1,700 class officers who represent Cornell’s 150,000 undergraduate alumni and to introduce a new cadre of students to the rewarding world of class leadership. 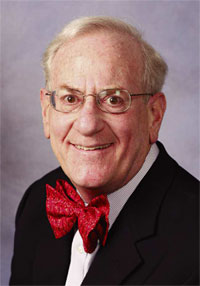 A few of the programs of which we are especially proud include collaborations with volunteer organizations such as the Cornell Alumni Association, the University Council, and Mosaic. For example, we hosted our second leadership reception with multicultural student leaders and alumni leaders at Homecoming. These informal exchanges offer student leaders the opportunity to explore career goals with and get guidance from experienced alumni, show off their critical thinking skills, and dem – onstrate their potential to become future leaders—as Cornell volunteers and in other aspects of their lives.

We also are excited about the work we have done to extend the value and momentum of the Cornell Alumni Leadership Conference (CALC). We have stepped up our leadership training curricula to include about fifteen year-round conference calls and webinars for reunion classes and class leaders, and increased (to twenty) the number of CALC 2014 sponsorships offered to multicultural student leaders.

Speaking of CALC, it is there that we recognize the recipient of CACO’s prestigious William “Bill” Vanneman ’31 Outstanding Class Leader Award—the coveted “Vanne.” Every year we receive dozens of terrific nominations from our class officers; the hardest part is choosing just one. So besides bestowing the singular Vanne, the officers of classes who have completed their five-year terms are also being highlighted at CACO’s annual meeting at CALC.

But there is still—always!—more to do. To guide us in our planning, we are examining feedback collected from our class officer survey that saw a highly respectable 40 percent response rate. Specifically, we have heard that class officers want more two-way communication from CACO—especially around changes that affect established processes— and further guidance on taking advantage of CACO’s innovative training resources. And we are making adjustments to address their needs.

Finally, I must recognize the extraordinary commitment of CACO’s board members. All nineteen of them are deeply committed to the work of CACO’s five standing committees: leadership development; membership; communications; students and young alumni; and diversity and inclusion. They participate in the annual CACO Summer Retreat and dozens of calls and meetings throughout the year. At CALC, we hope to announce that 100 percent of the CACO board is supporting the Annual Fund—and by the 2015 Sesquicentennial, that 100 percent of alumni class officers have joined this tradition.

CACO’s overarching source of pride is that its many activities and its board membership are driven by the demographics of diversity and inclusion— across the decades of alumni classes, geography, colleges, ethnicity, and gender. Finally, we want to express our gratitude to the extraordinary staff in Alumni Affairs, who make our jobs fun and fulfilling.

The News About Dues

The class dues structure has been alive and well at Cornell for about a hundred years. For the past fifteen of those years, we’ve collected online payments with the same technology. But we’re happy to announce that earlier this year we upgraded to a new online payment system. This means you have a cleaner interface, an easy and secure way to view your dues-paying history, and the ability to manage your auto-renewal options. If you pay your dues in the fall, you received an e-mail explaining that we’re moving all classes to a spring dues-paying cycle. Please bear with us through this one cycle, when we’re asking for a different amount than your usual twelve-month payment. Any questions about your dues, your Big Red Marketplace benefits, or your subscription to Cornell Alumni Magazine? Contact Debra.Earl@cornell.edu. Thank you in advance for paying your dues and supporting your class!

For alumni in the Cornell Club of Thailand, the Eighties and Nine – ties were a period of great activity. Now, after more than a decade of dormancy, the club has roared back to life during the past couple of years under the leadership of Surong Bulakul, ME ’79, MBA ’80.

This was evident at the club’s annual meeting in July, hosted by Chittimas Ketvoravit, MPS ’94, at the Novotel Siam Square. A wide variety of more than 100 alumni—ranging from members of the classes of the Fifties to students entering in the fall—attended the meeting and dinner. In addition to karaoke, Sage Chaiyapechara ’99 led participants in a quiz, guessing the names of Cornell buildings. 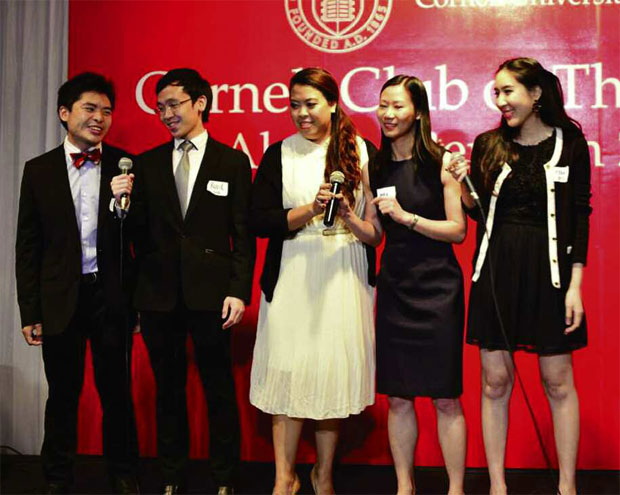 Young alumni entertain the audience at the Cornell Club of Thailand’s annual meeting.

To add cachet to the event, professors Ralph Christy (entrepreneurship) and Shorna Allred (natural resources) spoke about engaging students in global service learning projects, including ones in Thailand, carrying on a long-standing collaborative tradition between Cornell and Thai institutions. Hong – nan Ma, MA ’01, di – rector of in ter national pro grams in the Office of Alumni Affairs, shared University updates. She also spoke about Cornell’s alumni engagement throughout the world and about connecting the global community of Cornellians.

With more than 500 Cornell alumni living in Thailand, enthusiasm is growing; the club’s events now attract anywhere from fifty to 100 people. And with the July meeting such a success, they look forward to holding the next one in 2014. If you should be visiting Thailand then, the club welcomes you to join them!