The British Are Coming

In his spare time, Paul O’Shaughnessy dresses up in eighteenth-century garb and runs around battlefields throughout New England. Such are the duties of a Revolutionary War re-enactor. 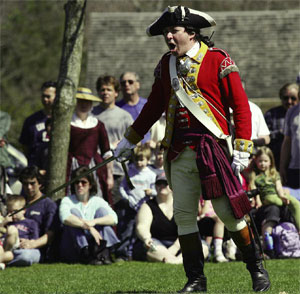 The Lexington, Massachusetts, resident plays the role of a Redcoat officer who aims to quell the colonial revolt. He and his colleagues replicate the outfits that British soldiers would have worn in 1775—from uniforms and belts to bayonets and muskets—much of which they make themselves. After doing drills and taking on ranked roles within the regiment, they participate in mock battles. They stage about eight major re-enactments per year, with the clashes often taking place in or near their historical locations. “We’re taking history off the pages of a book,” O’Shaughnessy says, “and bringing it to life to show the public what the Revolution really looked like.”

A quality assurance officer at a biotech company, O’Shaughnessy caught the re-enactment bug in the summer of 1972 when he took a summer job as a tour guide on the Lexington Battle Green, the site of the Revolution’s first conflict. After viewing a battle re-creation, the teenage O’Shaughnessy signed on with the Redcoats. While O’Shaughnessy’s current roles vary, he most often portrays Major John Pitcairn, a Royal Marine who served as a commander at Lexington and later died in the Battle of Bunker Hill.

For O’Shaughnessy, the most rewarding aspect of the hobby is the chance to educate viewers, especially children, about the war’s historical importance. “We’re trying to get across a deeper understanding of how the events of those revolutionary days affect us today,” he says. “When people throw around words like ‘liberty’ and ‘freedom,’ we want them to know what they really mean—and the responsibilities that go with them.” 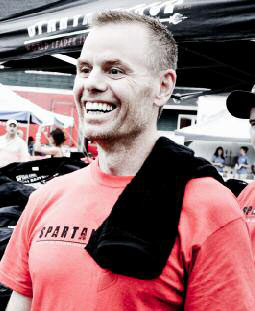 Joe Desena’s idea of vacation doesn’t involve sitting on a beach or drinking a mai tai. During the decade when he worked on Wall Street, Desena used his breaks to compete in ultra-long-distance races, some of which covered more than 350 miles and took a week to complete. That inspired him to found Spartan Race, a company that hosts events designed to push competitors past their mental and physical limits. “When you’re sweating and out of breath and you feel like you can’t take another step—but you do—it’s an amazing experience and it recalibrates you,” Desena says. “When you get to the end and finish, it changes you.”

Since hosting its first obstacle race in 2010, the Vermont-based company has expanded to dozens of events held annually at sites around the world. The races are offered at four levels of difficulty, from the Spartan Sprint (about three miles and fifteen obstacles) to the forty-eight-hour Spartan Death Race. Although the course isn’t announced beforehand—the unpredictability is part of the experience—obstacles can include scaling walls, carrying heavy objects, and scrambling up a grease-covered slope. As the company’s website puts it: “There is fire, mud, water, barbed wire, and occasionally Hell on Earth.”

Desena says that although most competitors are males in their thirties with athletic backgrounds, he’s seen some inspirational exceptions. Race finishers include a seventy-five-year-old woman, a triple amputee, and a 700-pound man who came to train at Spartan Race headquarters and succeeded in slimming down to 270. “It’s more mental than it is physical,” Desena says. “Anybody can do it.”