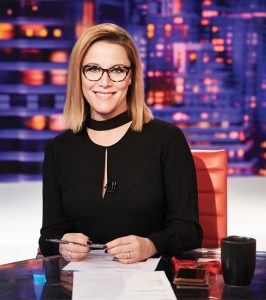 It’s just minutes before her prime time cable news show goes live at 7 p.m., and conservative commentator S.E. Cupp ’00 is in a Manhattan studio on a Thursday in October, camera-ready and cracking jokes. “It’s finally leather weather!” she laughs, adjusting her black leather skirt. But she’s immediately all business at a cue from a producer—jumping into a remote interview with Oklahoma Senator James Inhofe, who’s in Washington, D.C., about a surprise attack in Niger that killed four American soldiers. It’s been a hot topic on “S.E. Cupp Unfiltered”—which premiered in August on HLN, CNN’s sister network—with Cupp wondering why so much focus has been on President Trump’s remarks to one soldier’s widow, rather than on a lack of information from the Pentagon about the deadly ambush. Cupp wants answers—and she assumes Inhofe, a fellow Republican and senior member of the Armed Services Committee, wants some, too. Yet the interview doesn’t go as expected. When Cupp asks him for “the most pressing questions” about the attack, Inhofe responds, “Well, what questions are unanswered?” She pushes the senator further, asking if the attack was due to “an intelligence failure.” Inhofe again doesn’t answer directly, saying there’s risk anywhere troops are on the ground.

Cupp’s allotted time with Inhofe ends, and she sits back in her chair. There’s a long pause before she gets a signal that she’s no longer on camera—and then she explodes with amusement. “What the—?” she says in a singsong voice, ending the sentence with an expletive. “That was bizarre. I can’t wait to watch this interview back—it’s going to be painful!”

And with that, Cupp shakes off the exchange and smoothly moves on to the next segment; she’s a TV veteran, and it takes more than one awkward conversation to fluster her. The right-leaning host has spent years dealing with unpredictable politicians and outspoken pundits as a frequent contributor on CNN, MSNBC, and Fox News and programs like “Real Time with Bill Maher” and “The View” and as a writer for the New York Daily News, Glamour, and CNN.com. She has built a reputation as someone who isn’t afraid to speak her mind—and these days, she’s calling the shots with her own program. Cupp points out that during this particular week, she insisted on long pieces about the Niger situation. “Foreign policy usually makes people change the channel, and I know that,” she says. “But I feel like it’s my job, my responsibility, to share the stories that matter with as many people as possible—and this matters. That’s a gift.”

About two hours earlier, Cupp is in her office two floors below the studio, ending a meeting with producers. It’s been a full day already, beginning with a 10 a.m. conference call as she commuted from the suburban Connecticut home she shares with her husband and three-year-old son. At the moment, she’s in casual wear, with a camouflage scarf layered over a gray T-shirt and snakeskin print leggings, hair in a messy bun, and her trademark glasses in place (yes, they’re real). She notes that there’s one big way “Unfiltered” stands out in the contentious world of cable news: it’s a no-yelling zone. “The people I invite on the show I truly admire, respect, and want to hear more from,” says Cupp, whom New York magazine’s pop culture website vulture.com has called one of TV’s smartest pundits. “Whatever we’re talking about, we try to do it civilly and quietly. We are passionate and emotional about everything we talk about, but the audience can hear us articulate our points. No one is shouted off.” Cupp says she doesn’t automatically see someone with a different opinion as an enemy, and she tries to book guests each night that offer a range of views. It’s something she appreciated co-hosting CNN’s re-launch of “Crossfire” from 2013 to 2014, where she often found common ground with colleagues like Van Jones, a former special adviser in the Obama Administration. “A lot of people like to tune in to shows that reaffirm their beliefs and to see someone be as angry as they are; I get that,” she says. “But I’m over that, and I have to think that other people are over that, too.”

Still, Cupp is vocal when it comes to being a conservative, even if her thinking sometimes doesn’t align with so-called conservative values. She grew up Roman Catholic, but is now an atheist. She backs gay marriage and opposes the death penalty, yet she’s pro-life and supports gun rights. And while she’s a proud Republican, Cupp won’t uniformly toe the party line—calling out the GOP on the air, for instance, for not being as outraged by the Niger ambush as they were about the 2012 Benghazi attack. “I’m very open when I have some criticism for the party or the president. I’m also not totally defined by formal conservatism,” she says. “I talk about these issues from a place of common sense. I hope people find that to be accessible and refreshing.” Yet that means both the left and right have slammed her at times. When Esquire political blogger Charles Pierce disagreed with her comments on President Obama’s tax policy, he called her “a colossal idiot.” Several years ago, after Cupp criticized Planned Parenthood, former MSNBC and ESPN commentator Keith Olbermann ’79 tweeted that she was “a perfect demonstration of the necessity of the work Planned Parenthood does,” sparking controversy when some thought he was implying that she should have been aborted—or at least, that she should never have been born. And during the presidential election, Cupp’s open disapproval of Donald Trump kicked off a Twitter attack. “One of the dumber pundits on T.V. Hard to watch, zero talent!” he wrote, later adding that she was “a totally biased loser who doesn’t have a clue.”