For Jamie Greubel Poser ’06 and the bobsled, it was hardly a case of love at first sight. As the former Big Red track and field star recalls, her inaugural ride “felt like I got put in a tin can and kicked off a cliff.” That was back in 2007, when Greubel Poser briefly tried the sport in Lake Placid at the behest of a Cornell teammate who thought her combination of strength and speed would be a perfect fit. But that first plummet was a turn-off, and she went ahead with her plans for grad school. “Most women don’t play contact sports, so maybe if I had taken a hit in football or ice hockey I would have been prepared,” she observes. “In bobsled we go seventy-five to ninety-five miles an hour and reach up to five Gs of pressure—it’s very intense. You hit walls and the only thing between your hip bone and the ice is the sled, which has a steel frame and no cushion. It’s an aggressive sport, and the first time it was pretty shocking to my body.” 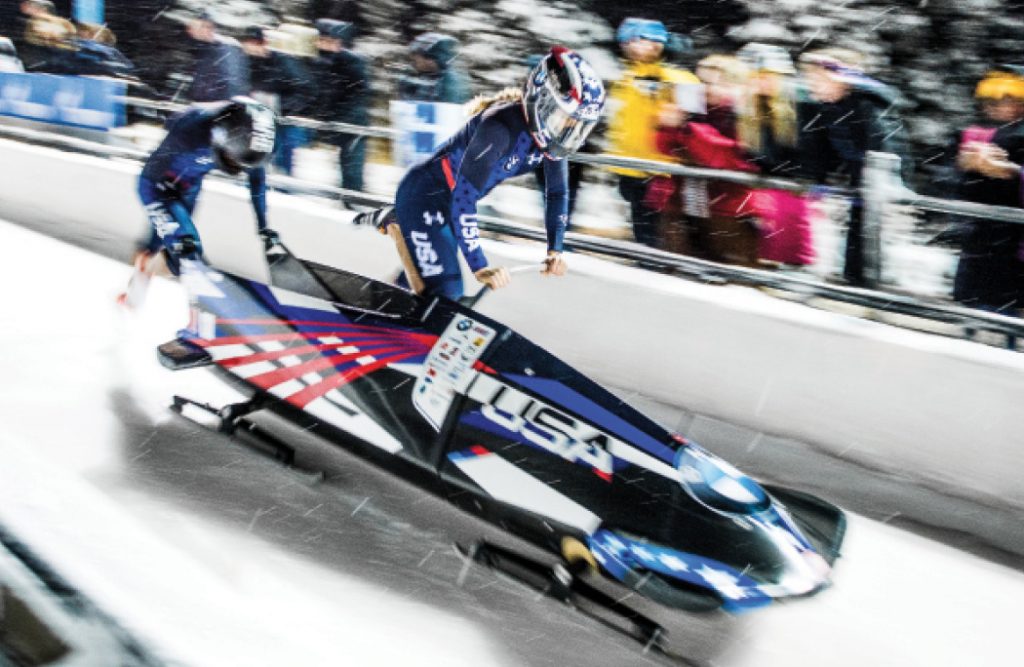 Greubel Poser (front) in a World Cup race—which she and her partner would go on to win—in Park City, Utah, in November 2017. Molly Choma

Flash forward a decade: Greubel Poser is one of the world’s top women bobsledders—a 2014 Olympic bronze medalist with a good chance of mounting the podium again at the Winter Games in South Korea in February. Named her sport’s 2016 athlete of the year by USA Bobsled & Skeleton, Greubel Poser has amassed a slew of medals in World Cup competition over the past few years and landed on Olympic broadcaster NBC’s list of “athletes to watch” in PyeongChang. “Jamie is probably the most fearless athlete we’ve had on the women’s track and field team at Cornell,” says longtime Big Red assistant coach Rich Bowman. “She’s got great focus. Once she gets into a competition, she really locks in.” When Bowman heard that his former student had taken up the winter sport, he says it made a certain kind of sense. “I didn’t know much about bobsledding, other than that people had to be a little bit out of their minds,” he says with a laugh. “And from a track and field standpoint, Jamie would run through a brick wall to get what she wanted. She was a great competitor. When she was out there, she took no prisoners.”

As a high-schooler in Princeton, New Jersey, Greubel Poser was a standout athlete—running track, playing field hockey, and show-jumping horses. Competing for the Big Red, she won Heps (the seven-event Outdoor Heptagonal Championship) three of her four years—she was injured as a sophomore—and set school records in the heptathlon and its indoor counterpart, the pentathlon. Her senior spring, she was named the class’s outstanding female varsity athlete. “The male recipient was Kevin Boothe [’05, BS Hotel ’06], and he went on to play in the NFL—and two years after graduation, he had a Super Bowl ring,” says Greubel Poser, who entered the Cornell Athletic Hall of Fame in 2016. “Most women don’t have many opportunities to pursue sports at an elite level post-collegiately. I wanted to, but I wasn’t sure what avenue to pursue.” But when she gave bobsled a second try—while still working on her master’s in elementary education at Lesley University—she found it an ideal match for her talents. “When I got to compete in the sport, everything that I loved about being an athlete and being on a team came back to me,” she says. “I think bobsled is the hidden gem of the sports world, especially for female athletes.”

After completing her master’s, Greubel Poser moved to Lake Placid to focus on bobsled, initially supporting herself by waitressing. (The sport, she notes, is an expensive undertaking, with athletes often responsible for costs like travel, shipping sleds, and owning multiple sets of runners—the sled’s blades—which cost some $6,000 a pair.) Her first major challenge was satisfying her coaches’ requirement that she add twenty pounds to her five-foot-nine frame, reaching her current 170 pounds through weightlifting and diet. “Bobsled is a gravity sport—heavier things go downhill faster—so they cap the weight to make it a level playing field,” she explains. “There’s a maximum weight for the sled and the two athletes, and if you don’t meet that you add lead plates. But that puts you at a disadvantage, as a smaller, weaker athlete pushing a heavier sled.” Bobsledders train eleven months of the year, she says, with a long off-season; World Cup competition runs from November to January. “We train like Olympic weightlifters and sprinters—it’s important for us to be strong, fast, and explosive, because we’re moving a 365-pound sled from a standstill to top speed in about fifty meters, equivalent to five or six seconds,” says Greubel Poser, who is married to a fellow bobsledder, Germany’s Christian Poser. “In the off-season, we build our base of training for the year so when we start the bobsled season we’re in top shape.”

Like most bobsledders, Greubel Poser started off as a brakeman—the rear position—making the national team in 2009–10. After she failed to land a spot on the 2010 U.S. Olympic team, she decided to become a driver (the front position, also known as pilot), in part because it might give her a better chance of making it to the next Games, since there were fewer U.S. drivers on the World Cup circuit. That gamble paid off, ultimately leading to her bronze in Sochi. Bowman recalls watching that medal-winning race on TV, viewing it in a group that was “jumping up and down, all excited” to see the former Big Red star compete on the world stage. “She got ready to get into the sled, and the camera did a pan of her eyes and they were just crazed—so fixed on what she was going to do,” Bowman recalls. “I remember those eyes when she was at Cornell and got ready for a competition. It was like, ‘Get out of my way—here I come.’ ”

Women’s bobsledding begins on February 20. Click here to read more about the US Olympic bobsledding team on NBC.