In a classroom on the Arts Quad, two teams of students are facing off in a charged political debate. The subject—whether or not the United States should launch a military intervention against North Korea—is timely, given the increasing tensions between our government and the hermit kingdom’s dictator, Kim Jong-un. But what’s surprising is the idiom in which the conversation unspools: not English—or even Korean—but the language of Horace and Ovid. “Multi Coreani meridionales morientur,” one student says, arguing against intervention on the grounds that many South Korean lives would be lost. “Corea septentrionalis habet plurima arma, et antequam possimus hostes vincere, Corea septentrionalis magnas urbes meridionales crudeliter deleverit.” Translation: North Korea has more arms, and before we could win, North Korea would cruelly destroy many cities. 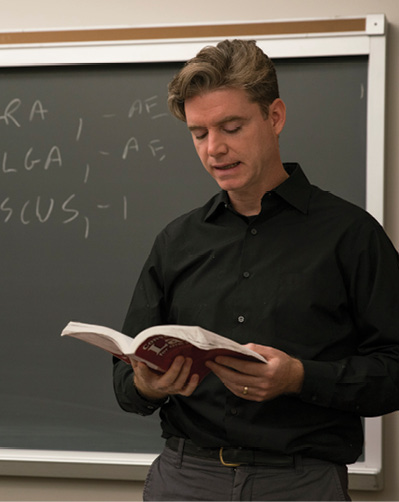 The class, held in a windowless room in Lincoln Hall in early November, is one session of a three-credit course—Conversational Latin—whose very title would long have been considered an oxymoron. And its professor, Daniel Gallagher, is one of the University’s more unusual hires: a former Catholic monsignor, he spent a decade working at the Vatican, translating official documents into the language of the Holy See, before leaving the priesthood to get married and start a family. When he joined the Cornell faculty, says colleague Michael Fontaine, “it sort of shook the world of classics.” Gallagher’s hiring, Fontaine says, “is a colossal coup for us. It was an unbelievable alignment of the stars, where an American who is widely regarded as one of the world’s great experts on using Latin as an active, living language decides to give up the priesthood and to accept an appointment with us.”

As classics scholar and Cornell President Emeritus Hunter Rawlings notes, Latin has traditionally been taught on the page: pedagogy was focused on mastering grammar and vocabulary to enable the reading of such ancient texts as Virgil’s Aeneid and Ovid’s Metamorphoses. “Most of us classicists can’t speak Latin—we can’t speak it at all,” says Rawlings, who first took up the language in the eighth grade. “We were taught to read it, take it apart, and analyze it, not to speak it. So we didn’t use it actively—and that means that people like Dan Gallagher are very rare.” Asked if he has ever chatted in Latin with Gallagher, Rawlings chuckles. “I can’t do it—there’s no way,” he says. “I would be as halting as a first- or second-year student.”

The conversational Latin class, one of several courses Gallagher taught during his first semester on the Hill this past fall, featured activities—like the Korea debate—more familiar to students of modern languages like French, Spanish, and German. He took students on forays around campus to translate the Latin incorporated in maps and artwork; had them haggle with each other in ersatz marketplaces; studied the Latin mottos on state seals; cast them in a mock trial for shoplifting; and more. “I was impressed by the breadth of activities,” says Jason Baretz ’19, a physics major from New Jersey who’s been studying Latin since sophomore year. “My previous classes were more of, ‘Do the homework assignment from the book and translate the sentence and then talk about it in class.’ I found it a nice change of pace that there’s a variety of things we can do in applying the Latin.”

Gallagher’s title is “professor of the practice,” a non-tenure-track position less frequently given in humanities than in fields like science, technology, and business. It’s intended for faculty who don’t necessarily have traditional bona fides—such as a PhD and numerous journal publications—but whose professional experience makes them valuable educators. “This was an innovative way to bring someone to the academy who had this almost unique background but had not previously been an academic,” says Provost Michael Kotlikoff, who notes that Cornell’s Latin reputation has already risen to the point where students are seeking to transfer from other institutions. “If you are interested in this area and really want to obtain a kind of fluency and comfort with the language, Cornell is the place to come.” A February 2017 blog post from the Classical Association of New England called Gallagher’s hiring a “game changer . . . [that] has burst into the world of classics,” adding: “This is a major change for an Ivy League classics department, no question; and people active in the Living Latin community are paying close attention.”