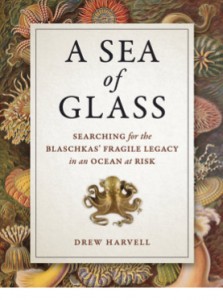 A Sea of Glass
Drew Harvell

Harvell, a professor of ecology and evolutionary biology, uses Cornell’s Blaschka collection of glass figurines–which depict hundreds of underwater invertebrates–to frame her exploration of sea creatures and the challenges they face today. While the species represented in the collection were thriving when they were sculpted a century and a half ago, Harvell notes that many have since been devastated due to climate change, overfishing, and industrial pollution. In the book, the avid diver describes her up-close encounters with these living creatures–from jellyfish to anemones–as well as her horror at seeing whole ecosystems destroyed. “Our 150-year-old Blaschka collection is a time capsule,” she writes, “pulling us back to explore the biodiversity of a bygone era.”

Janowitz’s novel follows Sylvia, a neurotic Jewish matriarch, as she frantically prepares for a Passover seder after finding out that her youngest child has invited her new boyfriend and his parents, who belong to a famous and wealthy family. To Sylvia’s dismay, her other two children are bringing their own significant others, of whom she disapproves. As past grievances and memories resurface, she struggles to reconcile her expectations with her family’s happiness. “With an impeccable eye for detail,” writes Kirkus, “Janowitz skillfully creates scenarios and relationships so authentic that they’re simultaneously hilarious and cringe-worthy.”

In a novel that Booklist calls “spare and chilling,” Warner creates a post-apocalyptic world and explores the hard choices people are forced to make to survive. After a mysterious disaster deprives their community of power and water, the protagonist and his wife must navigate the tricky balance between sharing resources with their neighbors and saving them for themselves. “Every hour or so, they took a sip of water,” Warner writes. “It seemed enormous but precious–the most precious thing.” With no sign that help is forthcoming, panic sets in as the neighborhood grows increasingly desperate, sparking violence and chaos.

As a child, LaValle was enraptured by the horror fiction of H. P. Lovecraft. As he got older, however, he realized that many of Lovecraft’s stories were disturbingly racist—-an insight that became a source of internal conflict for LaValle, who is African American. In LaValle’s latest novel—-a riff on what he calls one of the most egregious examples of Lovecraft’s xenophobia—-a young black man in 1924 New York negotiates racism, police brutality, and cosmic terror. The protagonist, a mediocre guitar player and street hustler, falls into a world of dark magic and must fight to survive. The National Book Review praised The Ballad of Black Tom as “a gorgeous Möbius strip of a novel that uses magic, horror, and history to create a lens through which the injustices of the modern day are alarmingly evident.” 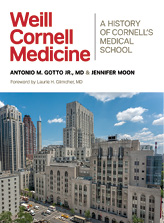 As Dean Laurie Glimcher observes in her foreword: “The history of Cornell University Medical College–now Weill Cornell Medicine–is essentially the history of modern medicine.” Published by Cornell University Press, the book–co-written by Gotto, the college’s dean emeritus, and his longtime editorial administrator–traces the institution’s trajectory from its founding in 1898 to its present status as one of the country’s leading academic medical centers. The authors chronicle the growth of the college and the evolution of medical education through an era of rapid scientific advances, tackling more than a century of urban crises, international controversies, and public events from two world wars through the attacks of 9/11.

How to Succeed In College and Beyond
Daniel Schwarz

Schwarz, who has taught English literature on the Hill for nearly half a century, offers insight into the college admissions process and the challenges of the undergraduate experience, covering such topics as student loans, course selection, extracurricular activities, and applying to grad school. With a special emphasis on the benefits of pursuing a humanities degree, the book is aimed at helping students balance the joy of learning with the practical need to find a career path. As he notes in a chapter entitled “What to Do with a Bachelor of Arts in English”: “What English majors bring to career possibilities are the ability to think critically, speak articulately, write lucidly and precisely, and read powerfully, deftly, and with understanding of subtleties and nuances.”

To purchase these books and others by Cornellians, or to submit your book for possible mention in Cornell Alumni Magazine, go to the “Cornell Authors” tab at cornellalumnimagazine.com.