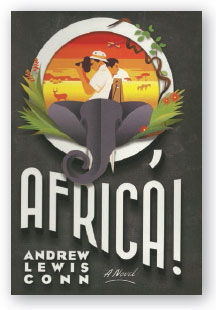 At the tag end of the Roaring Twenties, twin moviemakers Micah and Izzy Grand turn out silent comedies and dismiss the new talkies. Micah is a flamboyant director, gambler, and womanizer; Izzy is a brilliant but painfully shy cameraman. Their attempt to make the first studio movie in Africa devolves into a series of disasters when people die and a hippo eats some of their film. While Conn deals with the themes of racism, anti-Semitism, and cultural disruption, his second novel is above all a love song to the early movie industry.

Making Noise, Making News by Mary Chapman, PhD ’92 (Oxford). Shifting from a reliance on oratory to a focus on print allowed suffragists to be less controversial, argues an associate professor of English at the University of British Columbia. “In the final fifteen years of a lengthy campaign that coincided with the founding of literary modernism and culminated in 1920 with the ratification of the Nineteenth Amendment,” she writes, “U.S. suffragists took advantage of the low cost and wide readership of mass print media to spread the suffrage message across a diverse, politically divided, and geographically spread out population.”

Love Sick by Frances Kuffel, MFA ’84 (Berkley). In her latest memoir, the author of Passing for Thin and Eating Ice Cream with My Dog recounts her search for a man who is, if not exactly Mr. Right, then Mr. Good Enough. As she tries out online dating sites, she corresponds with a persistent scammer, meets shoe fetishists, and goes on a series of strange dates. “You probably picked up this book expecting a love story or a comedy,” she writes. “I think it is, in the end, a love story that hasn’t reached its ending yet.”

Empires Without Imperialism by Jeanne Morefield, PhD ’99 (Oxford). “Liberal imperialists insist that we understand Britain and America as essentially liberal societies,” argues an associate professor of politics at Whitman College. “At the same time, they commit themselves to a politics that supports the status quo—the continuing economic, military, and political domination of much of the world’s population. They express revulsion at violations of liberal human rights throughout the world, and yet insist that the ongoing abrogation of these rights for those who fall within the liberal imperial state’s sphere of influence remains a regrettable but necessary path to liberal ends.”

The Tender Friendship and the Charm of Perfect Accord by Gavriel Shapiro (Michigan). Vladimir Nabokov’s father was a prominent jurist and liberal statesman at the turn of the twentieth century—a connoisseur of literature, painting, music, and theatre, and an athlete, chess player, butterfly collector, anti-communist, and leader in the Russian émigré community in Berlin during the early Twenties. He advocated prison reform, denounced capital punishment, and condemned the persecution of Jews. A professor of comparative and Russian literature at Cornell examines the life of V. D. Nabokov and the influence he exerted on his son’s worldview, politics, and aesthetics.

Killer of Enemies by Joseph Bruchac ’64 (Tu). In a future where technology no longer works and genetically modified monsters roam the earth, the young Apache warrior Lozen has the physical and magical skills to slay the monsters and save her family.

The Secret of Rose-Anne Riley by Shaw J. Dallal ’55, JD ’59 (Hamilton). In his debut novel, an emeritus professor of Middle East studies at Colgate University tells the story of four generations of a family and the destructive effect of keeping secrets.

The Lonely Hearts Club by Brenda Janowitz ’95 (Polis). After Jo Waldman’s father fires her and her boyfriend breaks up with her, she becomes a spokeswoman for an anti-love website. Soon she must abandon that role when she falls for the site’s programmer.

Etched in Clay by Andrea Cheng ’79, MS ’84 (Lee & Low). The enslaved potter known as Dave created—and signed—some of the best-made examples of nineteenth-century Edgefield pottery. Cheng, the author of Only One Year, tells Dave’s story in poems that communicate his bravery, dignity, and artistry.

Plastic, Ahoy! by Patricia Newman ’81; photographs by Annie Crawley (Millbrook). A team of scientists spends three weeks aboard the New Horizon investigating the Great Pacific Garbage Patch, where tons of plastic have drifted from around the world and threaten the ocean’s food chain.

Planning for Long-Term Care for Dummies by Carol Levine ’56 (Wiley). The director of the Families and Health Care Project offers a broad overview of information on long-term care including such topics as assisted living, legal and financial issues, transportation, nursing homes, medical care, rehabilitation services, and how to modify your home to age in place.

Playbook for Progressives by Eric Mann ’64 (Beacon). The director of the Labor/Community Strategy Center outlines the sixteen qualities of a successful political organizer. “My hope,” he writes, “is that you will be transformed, from a critic to an activist, from an activist to an organizer, and, finally, from an organizer to a more conscious, introspective, and successful leader.”

New Netherland Connections by Susanah Shaw Romney, PhD ’00 (North Carolina). Drawing on archival material, an assistant professor of history at the University of Arkansas, Little Rock, investigates the important role of women in securing social networks in the Dutch empire. Winner of the Jamestown Prize and the Hendricks Award.

Brothers in Arms by Andrew Mertha (Cornell). China’s assistance maintained the viability of the Khmer Rouge regime (1975–79), yet it received little benefit from its Cambodian allies. An associate professor of government at Cornell asks why such a powerful nation was unable to influence its far weaker and ostensibly dependent client state.

The Success Matrix by Gerry Langeler ’72 (Logos). In this hybrid of business guide and fiction, the managing director of OVP Venture Partners demonstrates the ways executives can improve business performance, as well as increase satisfaction in their personal lives, by focusing on vision, process, and output.

Climate Changed by Philippe Squarzoni, translated by Ivanka Hahnenberger ’83 (Abrams). The winner of the Jury Prize at the 2012 Lyon Graphic Novel Festival brings together research and interviews with experts in a personal journey through the science of climate change.

A History of the Vietnamese by K. W. Taylor (Cambridge). A professor in Cornell’s Department of Asian Studies surveys more than 2,000 years of Vietnamese history, covering historical events, important people, culture, economics, language, literature, religion, and relations with China and the U.S.

Madiba A to Z by Danny Schechter ’64 (Seven Stories Press). In a companion book to the film Mandela: Long Walk to Freedom, a documentary filmmaker and Emmy-winning producer for ABC News paints a portrait of Nelson Mandela that shows the strengths and flaws of the man behind the image.

Derivative Securities, Financial Markets, and Risk Management by Robert A. Jarrow and Arkadev Chatterjea, PhD ’93 (Norton). Jarrow, the Lynch Professor of Investment Management at the Johnson School, and Chatterjea, a research fellow at the Kenan-Flagler Business School, provide an accessible introduction to derivatives and their uses and abuses.

Hunger and Hope by George W. Norton ’71 (Waveland). Drawing on his experiences as a Peace Corps volunteer in Colombia, a professor of agricultural and applied economics at Virginia Tech presents the struggles of the rural poor to improve their lives.

The Human Rights Paradox edited by Steve J. Stern ’73 and Scott Straus (Wisconsin). Two professors at the University of Wisconsin edit a collection of essays that examines the tensions between universal ideas about human rights and local conditions.

A Self Made of Words by Carl H. Klaus, PhD ’66 (Iowa). The founder of the Nonfiction Writing Program at the University of Iowa shows how to project the self and craft a distinctive persona in nonfiction writing.

Moments of Impact by Chris Ertel and Lisa Kay Solomon ’93 (Simon & Schuster). Two experts on business innovation present a method for wrestling with tough issues that avoids the pitfalls of ordinary meetings.