Conferences and Webinars Support an Army of Volunteers

With more than 15,000 alumni volunteers, Cornell is the envy of most universities. Our alumni plan reunions, serve on school advisory committees, oversee regional campaigns, lead classes, oversee regional and international club boards, and much more. With this large army to keep informed and trained, the University has expanded its training arsenal to include not only an annual leadership conference, but events around the world – and even ways for alumni who can’t travel to stay up to date, share ideas, and learn how to perform their volunteer roles more effectively.

For more than a century, the Cornell Association of Class Officers (CACO) has held a mid-winter meeting in one iteration or another. About five years ago, that event became the Cornell Alumni Leadership Conference (CALC), bringing together alumni leaders from around the world to share best practices, learn from their peers, and hear from University administrators.

The three-day conference is designed to appeal to volunteers regardless of affiliation, under the overarching themes of collaboration and thought leadership. This year, more than 600 alumni leaders representing a wide range of constituencies – from colleges to classes to local clubs – gathered in Boston. Attendees participated in workshops on leadership, volunteer engagement, strategic planning, and many other topics. Participants also heard from senior University leaders on critical issues facing Cornell, and from student leaders on challenges and opportunities on campus including initiatives related to health and well-being.

On Friday, attendees participated in a public service project developed in collaboration with the Cornell Club of Boston, followed by a lunch showcasing college and program leaders, including deans of Engineering, Human Ecology, and Arts and Sciences. This roundtable discussion provided a window into the challenges, successes, and joys of leadership at Cornell. Saturday featured additional panels, from mentoring to planning for the Sesquicentennial.

Feedback from the weekend confirmed that one of the key benefits of CALC is the chance to engage with alumni leaders from around the globe. That interaction creates phenomenal energy, which is carried forward as attendees return to their organizations and implement what they’ve learned from each other. “CALC not only gives me great ideas on how to do my job better,” says Marie-Jouvelle Aubourg ’06, who is involved in both class and regional programs, “but also gives me the opportunity to meet so many alumni who give their time and energy as volunteer leaders.”

Next year’s conference promises to be the most successful yet. In addition to a broad array of training and networking opportunities, CALC 2015 will feature one of the major regional sesquicentennial celebrations. Write it down: Boston, January 16–18.

With alumni volunteers supporting the University all over the world – and some of them unable to travel to the East Coast in the winter – the University also hosts volunteer gatherings elsewhere. In early April, the seventh annual Asia-Pacific Leadership Conference was held in Singapore. 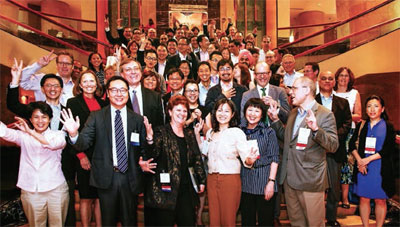 Attendees at the Asia Pacific Leadership Conference gather for a group shot.

The event was founded seven years ago by alumni leaders in Hong Kong, with the goal of bringing together the region’s most involved and committed volunteers to rekindle Cornell memories and share best practices in alumni engagement. Over the years it has evolved to include campus updates by University administrators as well as talks and panel discussions featuring academic thought leaders. Since its inception, it has been held in locations including Seoul, Beijing, and Shanghai. Attendance has almost quadrupled since its inception, with this year’s gathering drawing more than ninety alumni from eleven geographic areas, representing all seven undergraduate colleges as well as the Johnson School and the Law School. Several events were open to the community, attracting more than forty additional attendees and coverage by local media.

This year’s conference featured a broad array of topics, including an update on Cornell Tech by Provost Kent Fuchs and Johnson School dean Soumitra Dutta, and a public lecture by Vice Provost (and Pulitzer Prize winner) Fredrik Logevall entitled “Obama and the World in Historical Perspective.” Additional panel discussions and presentations focused on Cornell’s global reach, regional economic trends, and food security issues. “The conference promotes a culture of philanthropy through celebrating volunteer leaders’ generosity – sharing their time, talent, and treasure toward the University’s continued success,” says Mark Hansen ’79, one of the event’s organizers. According to Hansen, its benefits include increased participation in giving and renewed passion to support alumni activities in the region. “In addition, alumni really enjoy hearing from great faculty, getting up to speed with the latest happenings on campus, and sharing a grand time with fellow Cornellians,” Hansen says. 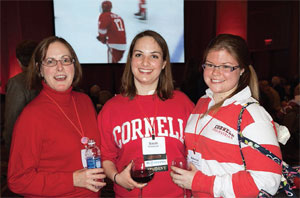 CALC included the traditional viewing of a Big Red hockey gam on TV, with libations.

The Asia-Pacific Conference was used as a model for the first-ever West Coast Leadership Conference (WCLC), held in Santa Monica in mid-March. Drawing nearly 100 volunteer leaders, it was overseen by the Office of Alumni Affairs and by Nancy Abrams Dreier ’86, who heads West Coast Regional Programs.

With approximately 31,000 alumni living on the West Coast, WCLC provided an opportunity for volunteer leaders to delve into many of the topics explored at CALC; it featured panels, talks, and social events meant to encourage a free exchange of ideas. Programs included a discussion of thoughtful leadership and another of enriched leadership through inclusion. Says participant Karen Kearns, DVM ’93: “I will think about and remember the fact that you can show leadership by helping to motivate others.” 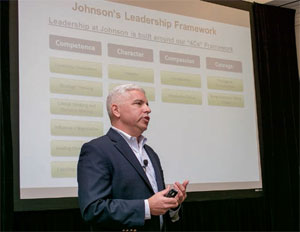 Some of the faculty and staff who attended included Jim Detert of the Johnson School, University Librarian Anne Kenney, and ILR professor Sam Bacharach, who gave the keynote address. Charlie Phlegar, vice president for alumni affairs and development, spoke about current Cornell news and honored a trustee emeritus, Curtis Reis ’56, who passed away in February. One of the focal points of the conference was the upcoming sesquicentennial celebration that will unite alumni across the country and the world. There was even a scavenger hunt, which brought back memories of orientation week when then-freshmen were just beginning to learn how important Cornell would be in shaping their lives.

The conference was such a success, Phlegar says, that another will be held in 2016.

Training Cornell’s largest volunteer group isn’t easy. The Cornell Alumni Admissions Ambassador Network (CAAAN) has more than 11,000 people serving on 350 committees around the world. While it offers online training and local guidance by CAAAN chairs, a more comprehensive type of in-person training has been difficult to arrange.

This May, for only the second time (and the first in seventeen years), the Undergraduate Admissions Office invited CAAAN committee chairs to Ithaca for a weekend of information sessions and re-engagement. “It was a great opportunity for them to be reacquainted with Cornell and get up to speed with what’s happening in admissions, and for the University to show its appreciation for their volunteer efforts,” says Enrique Vila-Biaggi ’94, MEng ’95, chair of the CAAAN Advisory Committee and CAAAN chair for Puerto Rico. Almost fifty people attended the event, Vila-Biaggi says; for many, it was their first visit to campus in more than a decade. 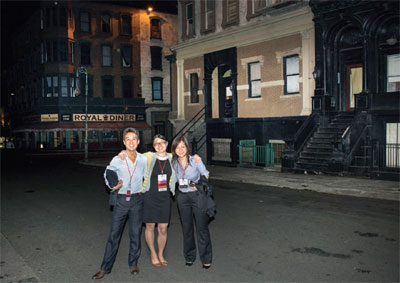 The weekend was vital due to the increased workload CAAAN volunteers have been shouldering. Cornell received a record number of applications for the Class of 2018 – upwards of 43,000, an increase of more than 7 percent over the previous year. CAAAN volunteers have stepped up to the plate, with 22,000 reports filed on those applicants, also an all-time high.

But with that huge workload comes the need to share best practices, meet other CAAAN leaders, and hear from University administrators – which the weekend offered. Jason Locke, interim associate provost for enrollment, provided an update on admissions trends and the recently ended cycle, while Kyle Downey, who oversees CAAAN, offered feedback from faculty who review applications on what they find helpful in alumni reports. A panel of current students answered questions about campus life and why they applied to Cornell, while Travis Apgar, associate dean of students, spoke about Greek life and other issues facing Student Services. “This is exactly what I needed,” says Stephen O’Brien ’91, chair of the CAAAN committees in Scranton and Wilkes-Barre, Pennsylvania. “I found all the discussions helpful. Each committee faces different challenges, but we can share how to solve problems.”

While leadership conferences are the “big picture,” webinars offer hands-on training. Alum­ni watch the presentations – which can combine real-time PowerPoint with video or audio – live online, participating via telephone or streaming audio. “Also, we can record webinars, so alumni have some flexibility,” notes Jennifer Cunningham ’92, senior director of marketing and metrics in the Office of Alumni Affairs. “They can tap in when they want.”

Cunningham says that webinars have many uses – from hosting Cornell Entrepreneur Network (CEN) events to facilitating conversations with faculty, deans, and President Skorton. “People love webinars with the deans and the president,” she says. “It allows them access to visionary leaders they wouldn’t necessarily have otherwise.” For volunteers, the University has held webinars on such topics as CornellConnect, e-mail best practices, using social media, alumni engagement metrics, class affinity marketing, class budgets, nominations, and succession planning. Cunningham notes that CACO has been a great help in identifying training needs. “A lot of what they’ve developed has been relevant to other groups, so we’ve opened up some of those things to other volunteers,” she says. “We’ve done surveys on what people want, and delivered on that. We’ve also offered things that they need to know around specific topics, like Reunion.”

Cunningham reminds volunteers that webinars are no substitute for face-to-face interaction, like that available at leadership conferences. However, if web­inars are offered throughout the year, the conferences can be devoted to more meaningful, in-depth discussions. And as technology continues to evolve – and the University hones its webinar techniques – Cunningham says that more and better online resources are in store.