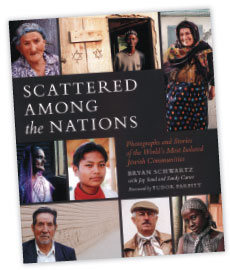 Scattered Among the Nations
Bryan Schwartz ’94

This coffee table book features a collection of essays, and hundreds of photographs, chronicling Schwartz’s sixteen-year journey to visit the world’s most isolated Jewish communities. They include the small town of Krasnaya Sloboda, nes­tled in the mountains of Azerbaijan, that is the last remaining shtetl—the Yiddish word for villages with large Jewish populations found throughout pre-Holocaust Europe. Thousands of miles away, a community in India can trace its roots to seven Jewish couples who survived a shipwreck more than 2,000 years ago; stranded, they built a home where they came ashore, south of what is now Mumbai. In Argentina, Jewish gauchos (cowboys) still tend the land that a European philanthropist purchased in the nineteenth century to house refugees. Each of the book’s sixteen chapters focuses on a different community that upholds its unique traditions, separate from the mainstream Jewish population. “Our hope is that through these pages you will realize that no racial, ethnic, or socioeconomic stereotype defines all Jewish people,” Schwartz writes, “but that many values and traditions do.”

What Was Mine
Helen Klein Ross ’76

Ross’s latest novel centers around a seemingly normal woman who is left in a vulnerable state after her marriage collapses, due in no small part to her infertility. “I was reminded countless times in the course of each day of my inability to accomplish what came easily to others,” says the protagonist. “Things I’d barely noticed before now seemed fraught with accusation. Childproof caps. Family-sized cereal. Car windows boasting Baby on Board!” When she encounters an infant girl left alone in an Ikea store, she makes a snap decision to take the child home and raise her as her own. She manages to keep the secret for more than two decades—until the truth comes out and her life is thrown into chaos. Said Publishers Weekly: “Ross deftly creates genuinely sympathetic characters and emotionally resonant prose around what could have felt sensationalistic.”

The Wisest One in the Room
Thomas Gilovich

“Being wise is not the same thing as being smart,” Gilovich, a Cornell psychology professor, and his coauthor write in the introduction. “By ‘wisest one in the room’ we do not mean the person with the highest IQ or the greatest command of facts and figures. Wisdom requires understanding the most common and most powerful influences on people’s behavior.” In a volume that Kirkus describes as “social psychology as self-help,” Gilovich uses the field’s latest research to discuss optimal approaches to interpersonal relationships and broader societal issues. The book touches on a wide variety of topics, from employee incentives to family vacations, climate change to organ donation.

From a winner of both the Edgar and Anthony awards for best first novel comes a tale that Booklist calls “one of the most intelligent thrillers of the year.” Travel writer Will Rhodes is content with his job at an award-winning magazine, even if he is occasionally forced to conduct illegitimate dealings that he doesn’t fully understand—until he meets a mysterious and beautiful CIA agent while on assignment in Argentina. He is soon catapulted from his sheltered life into a world of espionage, surveillance, and danger.

In his 115th published book, Pringle delves in to all things owl, including anatomy, digestive patterns, nesting habits, and historic myths. He details a multitude of species, from the elf owl (which weighs less than two ounces) to the Eurasian eagle owl (which has a wingspan of over five feet), accompanied by illustrations of the birds’ skeletons and distinctive features. “Owls live on every continent except Antarctica,” he writes. “You can find them just about anywhere—in the tropics, Arctic tundra, forests, plains, deserts, suburbs, and even in the neighborhoods and parks of some cities.” Intended for young readers, the large-format hardcover is part of the “Strange and Wonderful” series from an imprint of the children’s publisher Highlights.

To purchase these books and others by Cornellians, or to submit your book for possible mention in Cornell Alumni Magazine, go to the “Cornell Authors” tab at cornellalumnimagazine.com.