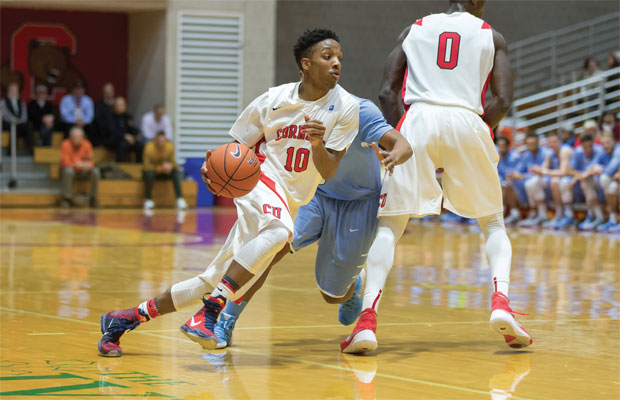 MEN’S BASKETBALL Matt Morgan ’19 (left) is quickly establishing himself in the Cornell record books, averaging 30 points per game in his first four Ivy contests. Morgan scored a school freshman record 33 points in a 77-65 win at Harvard before pouring in 32 points during a 77-73 win over Dartmouth that saw the Big Red rally from an eight-point deficit with less than four minutes to play. He’s the first Cornell player to score 32 or more points in consecutive games and the first freshman to have multiple 30-point outings.

FOOTBALL After becoming just the sixth Cornell football player to be named first-team All-Ivy three times, Chris Fraser ’17 was a third-team pick on the sports data company STATS’s All-America roster for 2015. Fraser led the Ivy League in punting and ranked fourth in the NCAA Football Championship Subdivision with an average of 45.1 yards per kick. He joins Erik Bernstein ’87 as the only Cornell punters to earn All-American honors. 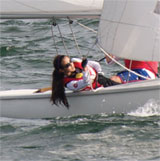 SAILING While the Rose Bowl typically brings up visions of football games and parades, for the Cornell sailing team it presented a welcome chance to compete in January. The Big Red took full advantage of the opportunity, placing fifth among the 29 teams at the annual Rose Bowl Regatta. The team finished two points in front of host USC. The B-division entry of Alex Woloshyn ’17 and Claire Riedman ’16 posted top 10 finishes in five of their eight races including a heat victory to finish sixth, while Shawn Kelter ’18 and Kimberly Wong ’19 (right) finished eighth in the A-division.

WOMEN’S GYMNASTICS The Big Red greeted 2016 in historic style, posting a program-best score of 194.025 to take second place at George Washington University’s Lindsey Ferris Invitational in January. The previous record of 193.675 was established at the 2008 USAG Collegiate Nationals. A pair of newcomers led the way with Malia Mackey ’19 winning the vault with a score of 9.875 and Lyanda Dudley ’19 posting the school’s second highest ever all-around score of 38.850.

MEN’S HOCKEY Jacob MacDonald ’15 was named the ECHL (formerly the East Coast Hockey League) Plus Performer of the Month in December. Midway through the season, he ranked fourth among ECHL defensemen with nine goals in 41 games for the Elmira Jackals.

WOMEN’S HOCKEY Hayleigh Cudmore ’14 was known as a defensive stalwart during her time on the Hill, but she displayed her offensive talents in December with a six-point weekend for the Calgary Inferno of the Canadian Women’s Hockey League. Cudmore collected two goals and an assist in a 9-5 win over the Toronto Furies and followed that up with a goal and two assists in a 6-5 loss to the Furies the next day. The Inferno’s offense has a Big Red feel to it, featuring Brianne Jenner ’13, BA ’15 (8 goals, 15 assists, 23 points), Jessica Campbell ’14 (10-10-20), and Jillian Saulnier ’15 (11-7-18) .

MEN’S TRACK AND FIELD Stephen Mozia ’15 has already punched his ticket for the 2016 Summer Olympics in Brazil, where he’ll represent Nigeria. In January, Mozia threw the shot 21.03 meters (69 feet), which was the world’s longest of the season and set both the Nigerian national record and the building record at Vanderbilt University’s indoor track facility.

WRESTLING Kyle Dake ’13 earned his first national championship since leaving East Hill when he won the 86 kilogram (190 pound) class at the U.S. National Senior Freestyle Championships in Las Vegas. Moving up from his previous weight of 74 kilograms, Dake was unseeded going into the tournament, but reeled off four straight victories, including an 11-4 win over David Taylor in the finals. Dake is no stranger to changing weights, becoming the first wrestler in NCAA history to win national titles in four different classes during his time at Cornell. In other news, Troy Nickerson ’10 will be inducted into the Eastern Intercollegiate Wrestling Association Hall of Fame in March. Nickerson was a three-time EIWA champion along with one runner-up finish. He also earned one NCAA championship and four All-American honors. Nickerson is now head wrestling coach at the University of Northern Colorado.