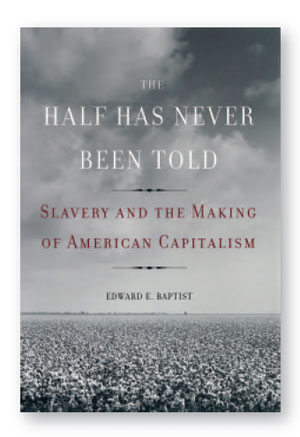 The Half Has Never Been Told

Slavery was the catalyst for America’s rise to wealth, argues Baptist, an associate professor of history at Cornell. Yet after the Civil War, the uncomfortable truth of slavery’s profitability was downplayed. “The historians of a reunified nation,” he writes, “insisted that slavery was a premodern institution that was not committed to profit seeking.” In 1860, four of the wealthiest states were in the cotton-growing regions of the South. Cotton accounted for 60 percent of U.S. exports and fed the mills of New England and Britain that clothed the world.

West of Sunset by Stewart O’Nan, MFA ’92 (Viking). “There are no second acts in American lives,” wrote F. Scott Fitzgerald. By the late 1930s, his earlier fame had waned and he was struggling to pay for his daughter’s boarding school and his wife, Zelda’s, mental hospital. He moved to Hollywood to become a screenwriter, not just for the money but to redeem himself. O’Nan’s latest novel is a poignant depiction of the last three years of Fitzgerald’s life as he toils over inferior scripts, falls in love with gossip columnist Sheila Graham, and works on The Last Tycoon.

The Death of Caesar by Barry Strauss ’74 (Simon & Schuster). The murder of Julius Caesar is the most famous assassination in European history. Strauss, a professor of history and Classics at Cornell, dispels many of the myths surrounding the Ides of March and takes us behind the scenes to portray Brutus, Cassius, and the other conspirators who feared that Caesar was becoming a tyrant. Rather than surrender the Roman Republic to one-man rule, the plotters chose to kill a man who had been a friend and benefactor. Their act managed to hold off autocracy for another 300 years.

Lesser Beasts by Mark Essig, PhD ’00 (Basic). Pigs are adaptable, prolific, and omnivorous, yet the same qualities that make them dietary staples in some cultures mark them as unclean in others. The author of Edison and the Electric Chair traces the history of pigs, from the wild boars that scavenged Neolithic settlements to the fat swine of the Roman Empire, from the hogs that helped American pioneers tame new land to the hybrids of the Corn Belt, and from the urban pigs that gave the poor their only source of meat to the animals raised in confinement barns by modern agribusiness.

Operation Thunderclap and the Black March by Richard Allison ’54 (Casemate). A retired Captain in the US Naval Reserve JAG Corps tells the story of two B-17 crewmen who served in the 91st Bomb Group in the last days of World War II. One, Addison Bartush, flew as co-pilot in thirty-one missions over Germany, including the bombing of Dresden. The other, Paul Lynch, PhD ’63, was shot down on his first combat mission in November 1944, imprisoned in a concentration camp, and forced to march westward in extreme winter conditions as the Nazis withdrew ahead of the advancing Red Army.

Barely Composed by Alice Fulton, MFA ’82 (Norton). In her first collection in more than a decade, the MacArthur Fellow and Ann S. Bowers Professor of English at Cornell explores the aftermath of grief, where “anguish is the universal language” and “every silence quotes / a greater silence.”

The Circling Canopy by Bhisham Bherwani ’90 (Cayuga Lake). The author of The Second Night of the Spirit ranges from dramatic monologues to sharp aphorisms in his second collection, which includes the poem “Delirium,” a collaboration with Ithaca artist Kumi Korf.

Africa’s Heart Mark Wentling ’83 (Peace Corps Writers). In the final book of Wentling’s Africa Trilogy, Robin Fletcher goes from Kansas to the small African country of Kotoku to find out more about a man known as JB. There he meets Letivi, a village chief who struggles with family problems while he tries to bring development to his people.

Lucy Lied by M. J. Daspit ’73 (Fireship). Monterey, California, in the 1870s is the setting of this historical mystery. When Lucy Strang is accused of murdering Flynn Talbott, her common-law husband, Dr. Jason Garrett, manipulates evidence to clear her name. Lucy cannot speak, and Doc Garrett hopes to cure her condition, but some suspect she is not as mute as she seems.

Polly and the Peaputts by Rodo Sofranac ’71, illustrated by Mark Sean Wilson (Inkwell). The second book in a series tells the further adventures of Polly and her friends. Honored with a Mom’s Choice Award for excellence in family-friendly media.

Shenandoah by Sue Eisenfeld ’92 (Nebraska). Shenandoah National Park, unlike parks such as Yellowstone and Yosemite, was not created out of a wilderness, but required the forced removal of thousands of people from their homes. Eisenfeld, an instructor in the MA Writing Program at Johns Hopkins University, tramps the backwoods and tells the stories of the lost communities of Virginia’s Blue Ridge Mountains.

The Assault on International Law by Jens David Ohlin (Oxford). A professor at the Law School argues that international law is under attack in the U.S., especially after 9/11, and that legal scholars such as Eric Posner, John Yoo, and others have provided the intellectual underpinnings for this offensive.

Progressive Traditions by Joshua B. Nelson, PhD ’09 (Oklahoma). An assistant professor of English at the University of Oklahoma sets out to dismantle what he sees as the false dichotomy between traditional and assimilationist Cherokee thinkers.

Violent Intermediaries by Michelle R. Moyd, PhD ’08 (Ohio). The askari, colonial soldiers in German East Africa (today’s Tanzania), had a reputation for brutality among the populace but were praised for their loyalty to their German officers. An assistant professor of history at Indiana University attempts a more nuanced understanding of askari identities, motivations, and loyalties.

Partisan Diary by Ada Gobetti, translated and edited by Jomarie Alano ’70, MBA ’82 (Oxford). A visiting scholar at the Cornell Institute for European Studies translates the wartime memoir of Ada Gobetti, an educator, politician, and women’s rights advocate who received the Silver Medal for Military Valor for her participation in the Resistance movement against the Fascists and Nazis in the Italian Piedmont during World War II.

The Space That Remains by Aaron Pelttari, PhD ’12 (Cornell). Poetry from the last years of the Roman Empire usually suffers in comparison with the work of the Augustan poets Virgil, Horace, and Ovid. But a Classics fellow at the University of Edinburgh argues that fourth-century writers such as Ausonius, Claudian, and Prudentius are poets of considerable talent.

Caught by Marie Gottschalk ’80 (Princeton). “The U.S. penal system has grown so extensive that it has begun to metastasize,” argues a professor of political science at the University of Pennsylvania. She examines the shortcomings of the major penal reform strategies and why the current political climate is preventing the country from solving its most pressing problems.

Creating Kosovo by Elton Skendaj, PhD ’11 (Cornell). A visiting assistant professor of political science at the University of Miami contrasts the role of international organizations in bringing meritocratic standards and respect for human rights to Kosovo’s police and customs service with the cronyism and corruption of the central administration and courts under local authority.