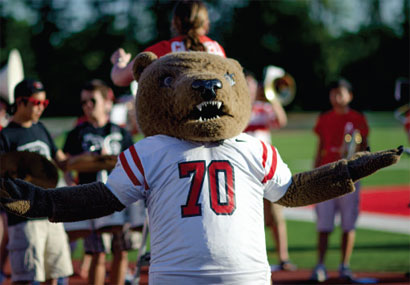 For the past three years, the CAA Cup has been presented at the annual Cornell Alumni Leadership Conference (CALC) to recognize an outstanding alumni volunteer program, chosen from many entries. Alumni leaders attending the conference are invited to vote for their favorite of three finalists, which are chosen by a panel of CAA board members.

This year’s winner was a unique program that the Class of ’95 created for the run-up to its 20th Reunion; the Cornell Black Alumni Association (CBAA) and the Cornell Alumni Admissions Ambassadors Network (CAAAN) were finalists for their creative solutions to enhance alumni engagement. These terrific programs, as well as those from many other groups, showcase the innovative ways in which Cornell volunteers meet their organizations’ goals.

Winner: The Class of ’95 Faces Blog

Give the Class of ’95 credit for thinking ahead. With more than two years to go before their 20th Reunion, the class aimed to generate excitement about the event. Launched in August 2013, the Class of ’95 Faces Blog was seen as a way for members to reconnect, to get excited about Reunion, and to remember what makes Cornell and the alumni community so great, according to Danielle Wolff ’95, who oversaw the project.

The idea is simple: profile one classmate each week for the ninety-five days leading up to Reunion. Classmates are asked to respond to a series of questions, from providing an update on their lives to naming their favorite course or extracurricular activity at Cornell. A new entry is posted each Monday on the website (www.cornell95faces.com) and supported on multiple platforms, such as e-mail and Twitter. “Even with social networks like Facebook and LinkedIn, maintaining class cohesiveness can be a challenge with alumni scattered throughout different industries and all over the globe,” says Wolff. “This project is an attempt to rekindle a feeling of pride and camaraderie, to generate excitement about gathering in person in Ithaca, and to stay connected for years to come.”

The response to the program has been terrific. “We’ve had several alums tell us that they hadn’t been planning to come to Reunion, but because of participating in or following the blog, they decided to attend,” Wolff says. “I think the program has worked so well because everyone has been so generous about opening up their lives and sharing their experiences and memories. It truly feels like meeting people all over again.”

While Homecoming has been a longstanding tradition for many alumni, African American alumni and students have not participated in large numbers, according to the Cornell Black Alumni Association. However, for the past three years, CBAA has worked to increase participation in, and enjoyment of, the fall weekend among its constituents. CBAA offers a series of programs throughout the weekend, cosponsored by a variety of student and alumni organizations, that attract hundreds of people; Homecoming 2014 included one of the largest contingents of African American alumni ever to return to campus.

Events included a presentation in the CBAA Alumni Lecture Series, tailgates prior to the football game, and the celebration of the fiftieth anniversary of COSEP (the Committee on Special Educational Projects, established to increase African American enrollment and support those students during their Cornell careers) with a brunch at the Africana Studies and Research Center. More importantly, according to CBAA leaders, it helped keep students and alumni connected and ensured that black alumni and students feel part of the overall campus community.

Cornell has seen a remarkable increase in applications, topping 40,000 for several years. The Cornell Alumni Admissions Ambassador Network (CAAAN) seeks to promote the benefits of attending Cornell by answering questions and hosting events, supporting the work of the Undergraduate Admissions Office.

As the numbers grow, it becomes more challenging for CAAAN to reach all applicants, especially in areas where there aren’t as many alumni to contact local high school students. The CAAAN Advisory Committee (‘C’AC, pronounced “C-ack”) decided to tackle the problem by asking its members to chair an additional CAAAN committee from across the country, with the hope of training another volunteer who lives locally to take on the role of chair for that city, region, or state.

While it was a successful strategy, there was one state—Mississippi— in which Cornell had a rough time attracting students; for two consecutive years, no member of the freshman class came from there. Enrique Vila ’94,MEng ’95,CAAAN chair for Puerto Rico as well as ‘C’AC chair, worked with Gian Fabbri ’96, CAAAN chair for Cambridge, Massachusetts, to recruit Boston-area alumni for the job. This enthusiastic group reached out to all applicants from Mississippi via phone and Skype, answering questions and sharing their college experiences. “To them, Cornell was a far-off place, and they had loads of questions for us,” says Vila. “While we often assume applicants understand what Cornell is about and where it is, these students may be the first in their families to travel out of state for school, or even be first-generation college students.”

The effort paid off. Six applicants were accepted and three enrolled in fall 2014. The project has been so effective that the ‘C’AC is looking at ways to expand it to other areas.

Keeping the Class of ’79 Connected

When Brad Grainger ’79 and Mary Maxon Grainger ’79, MPS ’87, began planning for Reunion, they realized they could use technology and social media to enrich the experience, share it with those who could not make it to Ithaca, and archive the events. During Saturday’s reception and dinner at Schoellkopf, the Jumbotron showed a montage of images from 1975–79 taken from the University archives or submitted by classmates, as well as a slideshow of the Distinguished Classmates Project. The photographer the class hired took pictures at every event and captured video of highlights, including President Emeritus Frank Rhodes’s remarks and a performance of a new Cornell song composed by a classmate. Throughout the weekend and afterwards, images and videos from the Virtual Reunion project were posted to Twitter, Facebook, and YouTube. 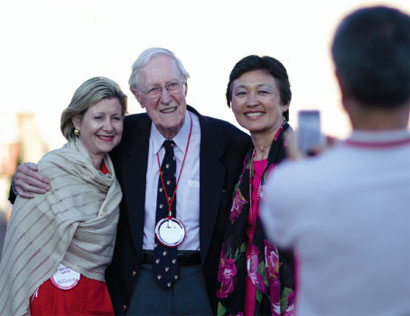 While the video effort was new, the Class of ’79 Distinguished Classmates Project has been in the works for more than ten years. As part of its 35th Reunion, the class named thirty-five distinguished classmates to complement the twenty-five previously named at its 25th Reunion and thirty named at its 30th. “We have made lasting contributions and received many important honors,” Mary Grainger says of her classmates. “We are accomplished architects, artists, CEOs, clergy, coaches, designers, doctors, editors, educators, engineers, entrepreneurs, entertainers, farmers, financiers, hoteliers, judges, lawyers, nutritionists, public servants, restaurateurs, scientists, and veterinarians, among other occupations and avocations.”

Recognizing this, the leadership solicited nominations from classmates, consulted with Alumni Affairs and Development staff, and did research on backgrounds and accomplishments. Says Maxon Grainger: “The selection process was extremely difficult, as the accomplishments are many and outstanding.” 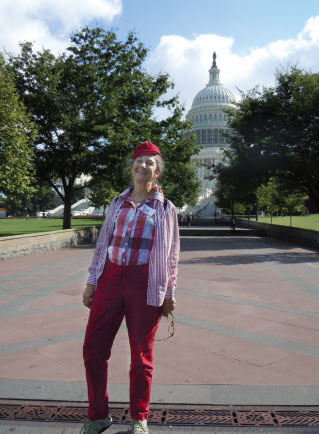 Since 2012, the College of Agriculture and Life Sciences Alumni Association (CALSAA) has been distributing grants to undergrads, grad students, and young alumni, to support research and internship opportunities. For 2014, the grants committee sought to cast a wider net, to increase both the number of applications it receives and the dollars it awards. According to Peter Schott ’81, president of CALSAA, the program provides tangible benefits for the association: it intro duces students to the fact that CALS has an alumni group and encourages them to become more engaged alumni in the future.

To get the word out, CALSAA promoted the program via the school’s career development office, department chairs, and academic coordinators. The hard work paid off, with an almost 200 percent increase in applications and more than double the number of grants awarded. Among the students whom the grants have helped are an undergraduate working for a U.N. food and agricultural organization, a grad student doing research in Guatemala, and another undergrad doing an internship in Tanzania.

With the Sesquicentennial approaching, the Cornell Club of Washington, D.C., was looking for a way to tie in the celebration to its own community. Fortunately, the University’s founder had a unique relationship with the city: in 1843–44, Ezra Cornell built an experimental telegraph line from Washington to Baltimore that helped form Western Union.

To highlight this connection, the club created a live-narration bus tour last September, taking alumni and guests through D.C. and Maryland; it showcased Ezra as a successful entrepreneur and businessman and explored his contemporaries in research during the 1840s. “It really is true that Cornell connections are everywhere in our daily lives,” says club president A’ndrea Van Schoick ’96. “The tour was a wonderful way to connect Ezra Cornell’s history and legacy to our own backyard.”