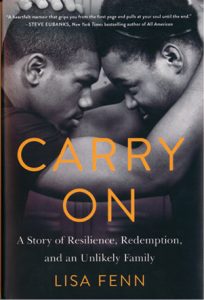 In 2009, Emmy-winning ESPN producer Fenn went to her hometown of Cleveland to pursue a lead about two young men whom she’d read about in the local paper. Wrestlers in an impoverished school district, both were significantly disabled: one, named Dartanyon, was homeless and legally blind, while Leroy had lost his legs after being run over by a train when he was eleven. The two were nearly inseparable, with Dartanyon often carrying Leroy through the school hallways on his back.

When Fenn’s human-interest story on them aired to more than four million viewers on ESPN, it sparked an outpouring of support and generosity including video game consoles, concert passes, NFL tickets, first-pitch honors at the Cleveland Indians game, new shoes for the entire wrestling team, and enough money for both to attend college. But with no bank accounts or computers, the teens had no direct way to benefit from much of it. That’s when Fenn became involved in their lives on a much more intense and hands-on way than she’d ever anticipated. “On a basic level, Dartanyon needed food and clothing. Leroy needed a new wheelchair,” Fenn writes in her memoir, which chronicles her efforts to help the two young men and the ways in which her relationship with them changed her life. “Both boys would require medical checkups, college application fees, laptops, beds, and desks. I would make the to-do lists, write the checks, and take down the mighty walls of poverty brick by brick.”

Elements of Medieval Christianity have been depicted in elaborate and varied works of art throughout the centuries. But many viewers have likely overlooked the fact that some of these paintings contain—hidden in plain sight—images of psychoactive mushrooms. In this book, subtitled “The Secret History of Hallucinogens in Christianity,” the retired professor of anthropology at Florida International University and his wife detail their decade-long journey across continents to uncover and catalogue psychedelic references in religious works. “While our findings are startling,” they write, “our intention is not to question people’s faith in Christianity but to uncover a mystery that we believe applies to many religions.”

Budhos’s novel delves into the life of a teenage boy in Queens who’s coping with the realities and perils of being an American Muslim in the post-9/11 era. When a careless mistake escalates into shoplifting charges and worse, he’s offered a deal: face the consequences, or feed the authorities information on his friends and community. At first he sees this as an opportunity to be a hero, but he soon realizes that the implications of his bargain are far more complicated. Publisher’s Weekly called this thriller “a stirring novel about coming of age amid intensive police surveillance and racial profiling.”

In the latest novel from the professor emeritus of English, the adult son of a former small-town “it” couple attempts to reconcile his father’s two personalities—the one he has always known, and the one he’s only heard about. As a young man, the father had been a handsome, popular varsity athlete, purportedly close to being called up to play professional baseball. But after losing a leg in World War II, he became a bitter, spiteful man who bore little resemblance to his previous self. Herrin’s past novels include The Lies Boys Tell, Fractures, and The Unwritten Chronicles of Robert E. Lee.

Price’s debut novel—which Kirkus called “an acridly witty portrait of the artist in decline”—centers on an aging, overweight, unsuccessful writer with a drinking problem. He spends his days in monotony in a Phoenix trailer park—until his memoir about his military service becomes a smash hit. It launches him into sudden fame and sends him on a long book tour, escorted by an aspiring author who is his biggest fan. As they travel the country, the cynical scribe and his idealistic guide develop an unlikely friendship.