Wally is getting annoyed.

Nearly seven months old, clad in denim overalls and an Aloha shirt bedecked with surfboards and sock monkeys, he just wants to play with some brightly colored plastic rings. But a friendly Cornell student keeps distracting him— with a frog, a puppy, and myriad other toys laid out on the carpet between them. “Look, it’s a rainbow!” the young woman says. Then: “Do you want to play with this ball?”

Not just child’s play: Running an experiment in the B.A.B.Y. Lab.

After nearly ten minutes, Wally’s happy babbles segue into something less pleasant—frustrated wails that reverberate through the adjacent control room, where psychology professor Michael Goldstein is observing through a one-way mirror. “This is one of the challenges of close-miking a baby,” Goldstein says with a laugh. “We go through microphones like you wouldn’t believe.”

It’s a typical day at B.A.B.Y. Lab, the Uris Hall facility that Goldstein runs with his wife, psychology research associate Jennifer Schwade. The name is an acronym for Behavioral Analysis of Beginning Years; using infants as young as two months, the lab studies how communication and social learning develop. “There’s so much that we don’t know, because people haven’t just watched, quietly,” Schwade says. “It’s like the Yogi Berra quote: ‘You can observe a lot, just by watching.’ But it’s something that hasn’t been done.” 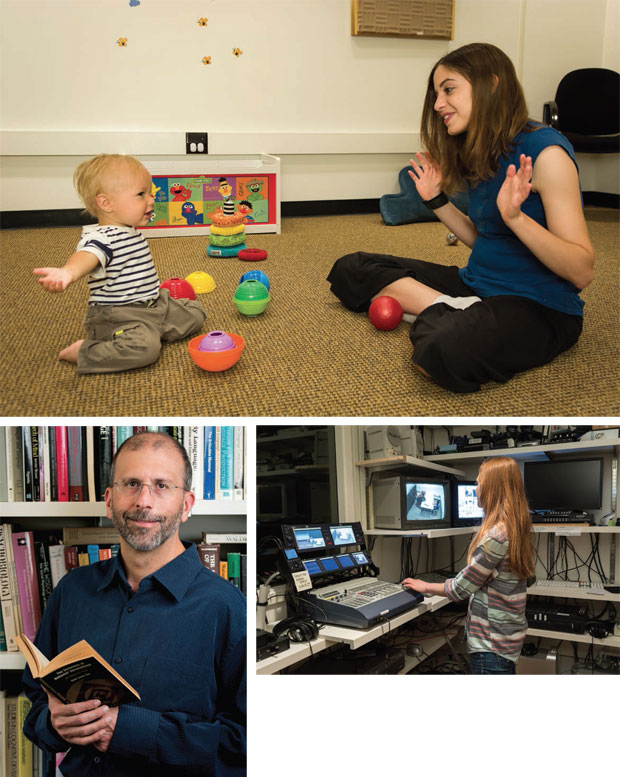 Clockwise from left: Professor Michael Goldstein; grad student Gina Mason at work; and the view from the control room.

B.A.B.Y. Lab takes a novel approach to its subject matter: unlike most such facilities, Goldstein says, it doesn’t just study babies, but rather how learning follows from the interactions between infant and caregiver. Those often-subtle give-and-takes are recorded on video; the lab’s grad students and undergrads then document them, down to the fraction of a second. “It’s in the moment-to-moment interactions that learning happens, so we have to go through terabytes of video frame by frame,” Goldstein says. “A change in smiling, in proximity, the kinds of things Mom says after a baby babbles at an object—that affects learning in real time. What looks like a mother and baby just hanging out and playing is actually a closely time-locked dance of behavior.”

Exploring that dance—specifically, how social interactions influence neurobiological development, learning, and visual attention—is the focus of grad student Gina Mason’s PhD thesis. On a Wednesday in late June, Wally is one of her research subjects. His mom, Kimberly Fick—she and her husband, Charles Fick ’06, are chaplains with InterVarsity Christian Fellowship on campus—sits behind him on the floor. She’s wearing soundcancelling headphones, so his babbles don’t affect her behavior; Mason is in the control room, speaking via microphone to the student experimenter playing with him. Much of the time, Mason tells the young woman to “redirect”—to pull Wally’s attention away from what he like that. So that’s one of the themes of the lab: timing really matters.”

After the play session comes the experiment’s second half. Wally sits in Fick’s lap; she’s blindfolded. When images appear on video screens around the room—ducks, a cartoon bear blowing bubbles—the experimenter tries to get Wally to look at them. The hypothesis is that due to his earlier frustration, he’ll be less able to pay attention—and indeed, he seems to have trouble focusing. The overarching notion? If humans don’t get the right interaction and feedback in infancy —due to such factors as living in a household stressed by socioeconomic disadvantages or having a primary caregiver who suffers from depression—it can have long-term negative effects such as lower IQ, decreased attention span, and poor school performance. To test that concept, Goldstein and colleagues recently launched a pilot program to work with low-income households in Colorado, offering parenting classes and studying the outcomes. “I view myself as kind of an engineer—I’m reverse engineering babies to see how they work,” he says, then adds: “I’m not kidding.”

Goldstein dates his research interests to a visit to the mall as a grad student at Indiana University; some undergrads, conducting a sartorial intervention, took him on a shopping trip. There he saw a mother kneeling in front of a stroller, keeping up a running conversation (and giving non-verbal cues like smiling and nodding) in response to her baby’s babbles. Goldstein surmised that her behavior— which reminded him of his grad studies on birdsong acquisition—was helping the infant learn language. As Goldstein observed on NPR’s “Sift” podcast: “A baby babbling by itself is just making noise—but a baby babbling in a social interaction is getting feedback for their sounds in real time.”

B.A.B.Y. Lab isn’t limited to babies of the human variety. Merging Schwade’s and Goldstein’s areas of expertise—her PhD is in child psychology, his in developmental psychology and animal behavior— it also studies birds. Directly below its offices in Uris is the facility where it houses more than 150 zebra finches. “In birds,” Goldstein notes, “we can control the entire rearing environment.” They can also conduct experiments that humansubjects boards would tend to frown on: for example, the lab is currently studying how changes in brain chemistry affect how well young males learn courting songs.

Another advantage of bird studies is that they avoid the human lab’s primary frustration: the difficulty of recruiting research subjects from Ithaca’s relatively small, homogenous population. The lab advertises on Facebook and Craigslist, distributes response cards to new mothers at Cayuga Medical Center, even sends students to the Ithaca Farmers’ Market with balloons and flyers. (Due in part to the subject crunch, the lab has developed a mobile testing facility for use in nearby cities such as Syracuse.) Another constant headache: the lack of on-campus parking for volunteers arriving with babies, strollers, and assorted paraphernalia in tow. One of the lab’s single biggest expenses is a dedicated spot outside Uris. “Cornell charges a fortune for that space, and it’s getting harder for me to justify it to NIH,” Goldstein laments. “But if we didn’t have it, we couldn’t run subjects. Frankly, if we had more spaces we could run more studies— but good luck with that.”

good luck with that.” Still, parking hassles pale in comparison to a dust-up from his Indiana days, when a light-hearted gesture to participating parents got Goldstein in hot water. “Before I hit on the idea of giving out Tshirts and bibs and stuff, I made little fake diplomas with the baby’s name,” he recalls. “In the corner was a little coupon: ’20 percent off your child’s tuition in eighteen years.’ About two weeks later I got a call from the university lawyers. They said, ‘Don’t ever do that again—or the money is coming out of your pocket.'”