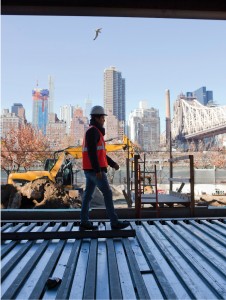 Even as just a steel frame, the Bloomberg Center offers a commanding view of Manhattan.

In a basement gym on Roosevelt Island, grad students in matching white T-shirts are teaching Halloween-costumed middle schoolers how to design their own video games.

At a nearby construction site, three state-of-the-art academic buildings are rising amid the clatter of moving steel and pouring concrete.

On the thirty-eighth floor of a Man­hattan skyscraper, a half-dozen start-ups are launching their businesses from offices with sweeping city views.

And in borrowed quarters in Google’s Chelsea building, a cadre of students and faculty are pioneering a bold experiment in graduate education.

Welcome to the University’s most prominent work in progress. Cornell Tech has been moving ahead at breakneck speed since December 2010, when then-Mayor Michael Bloomberg announced a competition to build a graduate technical campus on city-owned land on Roosevelt Island—and the University swiftly re­­solved to be a contender. Cornell won the bid a year later, amid much rejoicing both upstate and down.

The Roosevelt Island construction site in mid-November, with the Bloomberg Center at right and the residential tower at left.

Fast forward to today: a mere four years on, the campus has granted dozens of master’s degrees. Some 150 current students and about twenty faculty are crammed elbow to elbow in temporary space donated by Google. Tech professors have ongoing research projects in a wide variety of fields, including numerous collaborations with their colleagues in Ithaca. Construction on Tech’s permanent home is proceeding rapidly, and two new degree programs—one in law, the other in operations research—are scheduled to begin in the fall. Even students who’ll never study on Roosevelt Island are reaching out into its community, with events like the middle-school “code-a-thon” held there in late October. “Things are cruising along,” says Dan Huttenlocher, Tech’s founding dean. “It’s great. It’s a place now. The last time I talked to [CAM], it was a figment of somebody’s imagination.”

From the beginning, Cornell Tech was envisioned as a different kind of campus. For one thing, it’s in the middle of the East River. Although its home island is only about 3,000 feet from Manhattan proper—the Tech campus is across thewater from the Medical College, which is located on the borough’s Upper East Side—it’s only accessible from there via the subway’s F train or an aerial tram. To drive there, you have to take a bridge from Queens.

But logistics aside, Tech was designed to be different on a cultural level: it would have one foot in academia and the other in the rapidly evolving Internet sector. If a traditional university changes slowly—shifting course gradually, like an oil tanker—Tech would be swift and nimble, like a yacht. “We have license to do a lot of things in a new way; in fact, we have a mandate to do that,” says Mor Naaman, a social media expert who was among Tech’s early faculty hires. “We’re also willing to fail and to learn from our experiences. One of the great things about this place is that we can evaluate ourselves very quickly, and we can change to make it better.”

Like most Tech faculty, Naaman also has an appointment in a department on the Ithaca campus—in his case, information science. The exceptions are some professors in the campus’s Jacobs Technion–Cornell Institute, a partnership between the University and the Technion–Israel Institute of Technology that offers master’s degrees granted jointly by the two institutions, who have appointments at the Technion. “It’s a great opportunity here in that we start almost fresh, but with the Cornell and Technion brands—the name, heritage, connections, network, alumni, and reputation,” says the Israeli-born Naaman, whose résumé includes a research stint at Yahoo and a career in pro basketball. “We can try new things, and have the gravitas of Cornell and Technion behind us.”

Ask just about anyone at Tech—the 150 or so master’s and PhD candidates; the roughly two dozen faculty; the ten postdocs—and they’re likely to describe the campus in a similar way: not only is it preparing students to work at the intersection of technology and entrepreneurship, but it’s a start-up in its own right. “There are a thousand things going on—there’s this lively buzz,” says Michael Karp, MBA ’15, who was in the first class of Johnson School students to earn their degrees at Tech through a one-year program. “People are always hanging out and working collectively, even if there are no classes going on. It felt like it almost served as a home base for this start-up ecosystem, which I found to be rare in an academic environment.”

Karp is chief operating officer of DogStar, which is de­signing and marketing a device to interpret canine emotions by tracking tail movements. The start-up began as one of the collaborative projects that Tech students do as a key part of their education: mixed teams of MBAs, engineers, and computer scientists develop products and business concepts, with advice and feedback from industry mentors. Last spring, DogStar was one of the lucky crop of projects that won seed funding and a year’s residency in Tech’s incubator space. Located in the New York Times building, the open-plan offices come complete with giant windows and an eye-popping view. “I’ve never seen a co-working space in New York that’s this large and prest­­i­­gious,” marvels Rachel Mayer, MEng ’15, co-founder of another of those start-ups, a mobile platform for stock trading dubbed Trigger. “From a marketing or investor standpoint, when we bring people here, it puts us on a different level.” Mayer majored in math at MIT and spent four years on Wall Street before matriculating at Tech, where she was in the second-ever class of MEng students in computer science. “It seemed so perfect for what I was looking for—both for pursuing your own ideas while taking technical classes, as well as engaging the start-up community in New York,” she says. “The faculty have experience in both academia and industry, and it was great to be able to work closely with them on projects and get the kind of absolutely untouchable advice that you wouldn’t otherwise have at another large academic institution.”

Trigger and DogStar are among about a dozen companies that have al­­ready spun off from Tech—roughly half of them started by master’s alumni, the other half by postdocs in the Jacobs Institute. The campus’s status as an economic engine is no accident: a major impetus for the Roosevelt Island competition was to spur the city’s tech sector, with the aim of fostering Gotham’s answer to Silicon Valley. And indeed, Huttenlocher says, those initial start-ups employ some seventy-five people. “For this early a stage—and you have to remember, we have less than a hundred alumni—to have ten or twelve companies, that isjust crazy,” he says. “I would never have predicted that much start-up activity.”

Cornell Tech, says Huttenlocher, was designed to be “a very porous organization”—not only across disciplines, but between academia and the outside world. “In the digital age, that’s a particularly important change from the big industry of the last century and a half,” he says. “Things moved slowly; it took decades to get from the research lab to a product. It took huge amounts of capital to build the factories to produce things. That’s not the world we’re in today, which is very dynamic and flexible.” Many of Tech’s faculty have extensive industry experience—like Ari Juels, a cybersecurity expert who spent seventeen years at RSA, a network security firm, before joining the Jacobs Institute in 2014. “I like to develop technologies that are used in the real world, and this seemed to be baked into the Cornell Tech mission,” he says of what attracted him to the job. “In general, there’s a pretty large gap between academic research and industry’s needs and practice, and Cornell Tech is trying to close that.”

During fall semester, student teams work on what are known as “company challenges”—collaborating on assignments for such firms as Uber, MasterCard, and Twitter. Last fall, for example, Weight Watchers sought ways to encourage young people to eat better and be more active, prompting a Tech team to design a colorful app where teens earn virtual “apples” for healthy choices. During spring semester, students devise their own projects, often with an eye toward spinning them off into viable start-ups. “Projects are really the highlight of the entire program, and of the Cornell Tech approach,” says Shawn Bramson, a second-year student in the “alpha” class of the Jacobs Institute’s connective media program. “Over the twenty courses I will have taken for graduation, I’ll have had one exam; everything else is project-based.” 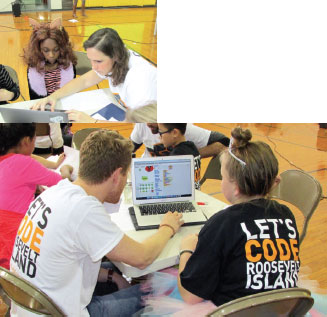 Bramson is currently focused on his own start-up: Pallette, which is developing a retainer-like device that lets quadriplegics use a smartphone—and whatever is connected to it, such as lights or a thermostat—via tongue control. The project, which Bramson started with three other connective media students, began in a course on human-computer interaction; now, the team has a prototype and is working with disabled people to refine it. “Unlike a typical program, Cornell Tech is focused expressly on accelerating its students out into the workforce, either in a big setting—like the Googles and Facebooks of the world—or a small company, either an existing start-up or one of our own,” Bramson says. “Now more than ever, the tech industry needs people with interdisciplinary skills—who have not just the ability to ‘code their hearts out’ and propose a business plan, but the understanding to ask, ‘What is technically feasible, and how does that impact the market’? So it’s an exciting time.”