FIELD HOCKEY Marisa Siergiej ’16 was named Ivy League Defensive Player of the Year, making her the first Big Red athlete to win such an award. She was also a unanimous first-team All-Ivy selection, becoming one of just three Cornell field hockey players to receive the honor three times. (The others are Amy Wright ’94 and Catie De Stio ’11, seen right.) Taylor Standiford ’16, meanwhile, broke her own single-season school record with 13 assists and will graduate with the University’s career record of 40. 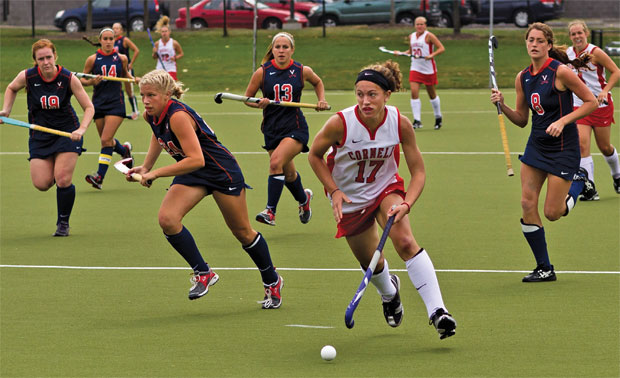 FENCING & FOOTBALL Angelica Gangemi ’16 and Luke Hagy ’16 shared the 2015 Richie Moran Award, presented annually to senior members of the Red Key Society (Cornell’s honor society for varsity athletes) who distinguish themselves through “academics, athletics, and ambassadorship.” A fencer, Gangemi has participated in three NCAA tournaments, represented the U.S. in the World University Games last summer, and carries a 3.74 GPA with a major in Spanish and a minor in Latin American studies. Hagy, a football running back, is the first player in Big Red history to amass 1,000 career yards in both rushing and receiving.

POLO David Eldredge ’81 became the first Big Red coach to reach 900 wins when the women’s team beat Skidmore 22-8 to open the 2015–16 season. Now in his 31st season as Cornell’s men’s and women’s polo coach, Eldredge has guided Big Red teams to 13 national titles and 36 national championship appearances and has had just one sub-.500 finish in a combined 58 seasons.

MEN’S BASKETBALL Former Cornell guard Cody Toppert ’05 has been named an assistant coach for the Rio Grande Valley Vipers of the NBA Development League; the team is an affiliate of the Houston Rockets. Toppert helped the Albuquerque Thunderbirds to the 2006 D-League Championship before playing professionally in Europe and New Zealand.

TRACK AND FIELD Former Big Red team captain Max King ’02 won his second straight Warrior Dash world championship in October, earning $30,000 for topping a field of more than 500 runners over a five-kilometer obstacle course that includes walls and mud pits. His time of 27:52.45 in Pulaski, Tennessee, was nearly 30 seconds faster than the runner-up. King previously won international competitions in mountain and trail running and participated in the World Cross Country Championships.

FOOTBALL Bryan Walters ’10 became the first Cornellian in 28 years to score an NFL touchdown when he pulled in a 20-yard scoring pass during the Jacksonville Jaguars’ 28-23 loss to the New York Jets on November 8. Walters signed with the Jaguars after three seasons with the Seattle Seahawks that included a Super Bowl win and two NFC championships. The previous alum who scored an NFL touchdown was John Tagliaferri ’86 for the Miami Dolphins in 1987. Seth Payne ’97 was the last Cornellian to score points in the league, being credited for a safety in 2002.