Kayla Cleggett ’20 stands just five feet tall, but when she puts on the Touchdown suit, she’s a force to be reckoned with. It’s Friday afternoon in mid-September, and Cleggett is sauntering around Ho Plaza, auditioning to be an East Hill icon. Aiming to join the student club known as the Big Red Bears, Cleggett has donned the costume inside Willard Straight Hall and been escorted outside by vice president Dan Stern ’18—who’s there both to evaluate her performance and to make sure that she doesn’t tumble down the front steps. “There’s something we call the ‘bear walk,’ which is basically how big your movements are,” Stern explains. “We like to see how much swagger they can walk with, how active they are, how much emotion they show.” 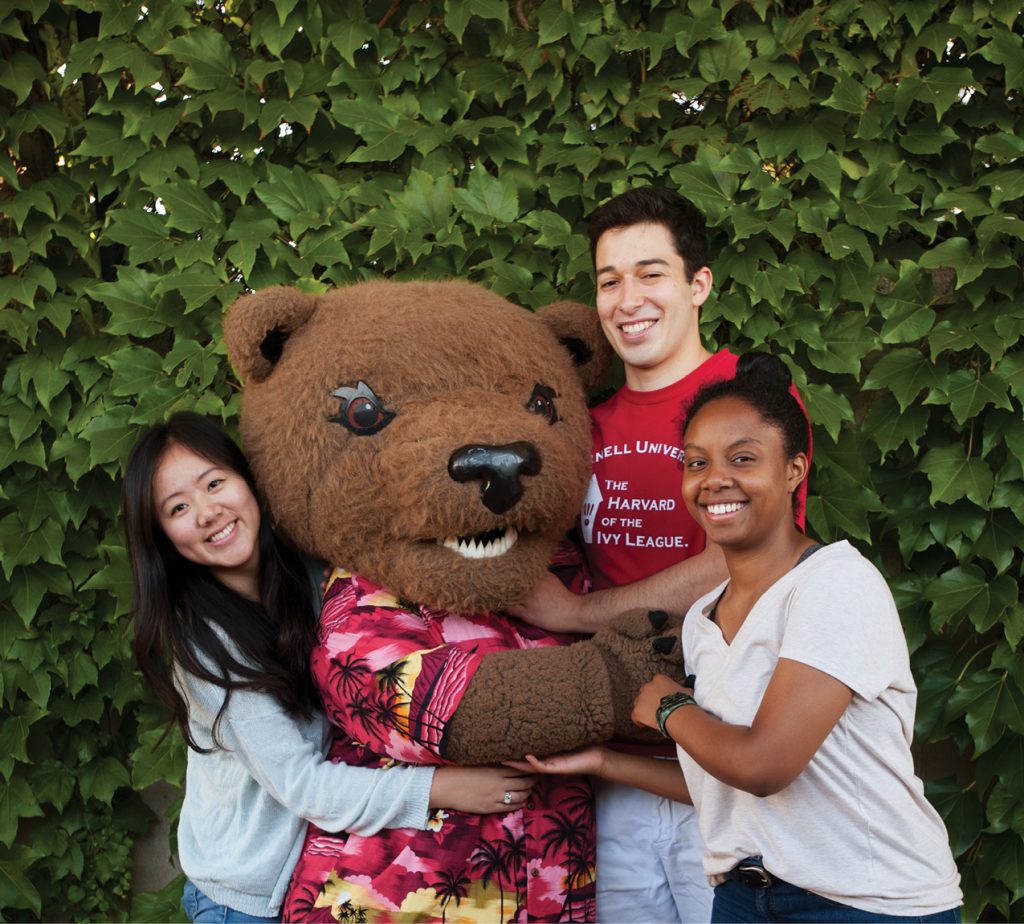 Once out on the plaza, the normally introverted CALS student is transformed: she struts about with ursine confidence, high-fiving strangers. She waves to passers-by, and several people stop for hugs or selfies. Never mind that Cleggett can barely see—as she explains later, the trick is to sneak peeks through the eyes and mouth—and that the oversized suit, built to accommodate Bears of all dimensions, is bunching at the ankles; Cleggett embodies Cornell’s mascot in all his furry, friendly glory. “It was a lot more fun than I thought it would be,” she says afterward. “I got to interact with people that I otherwise would not have spoken to—not that I actually spoke to them. Whether it was a jock, a toddler, or a visiting prospective student, it was an opportunity to show how welcoming Cornellians are to everyone. As a person who’s not always comfortable being loud or boisterous, being Touchdown gives me a chance to show my school pride with some degree of anonymity.” 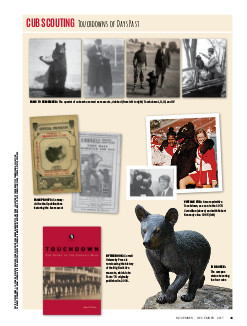 A week later, Cleggett gets the good news: she made the cut. An official student organization with about eighteen members, the Bears portray Touchdown as often as several times per week—not only attending the usual sports games, Homecoming, and Reunion, but a wide variety of campus gatherings like the annual Big Red Bar Mitzvah (for which he has his own yarmulke). Touchdown has traveled to the hockey match against Boston University in Madison Square Garden, the Sy Katz ’31 Parade down Manhattan’s Fifth Avenue, various Sesquicentennial celebrations, and alumni outings like a 2016 trip to the Philadelphia Zoo (where he was asked to avoid the actual animals, lest he upset them). At a minor league soccer game in Rochester this fall, he got to kick the ball around at halftime with such mascot luminaries as Billy the Buffalo (of NFL fame) and Syracuse University’s Otto the Orange. “I like making people happy, and that’s what Touchdown does,” Stern says. “He’s outgoing and happy all the time—except when Cornell loses, of course. But Touchdown gets over that pretty quickly.” 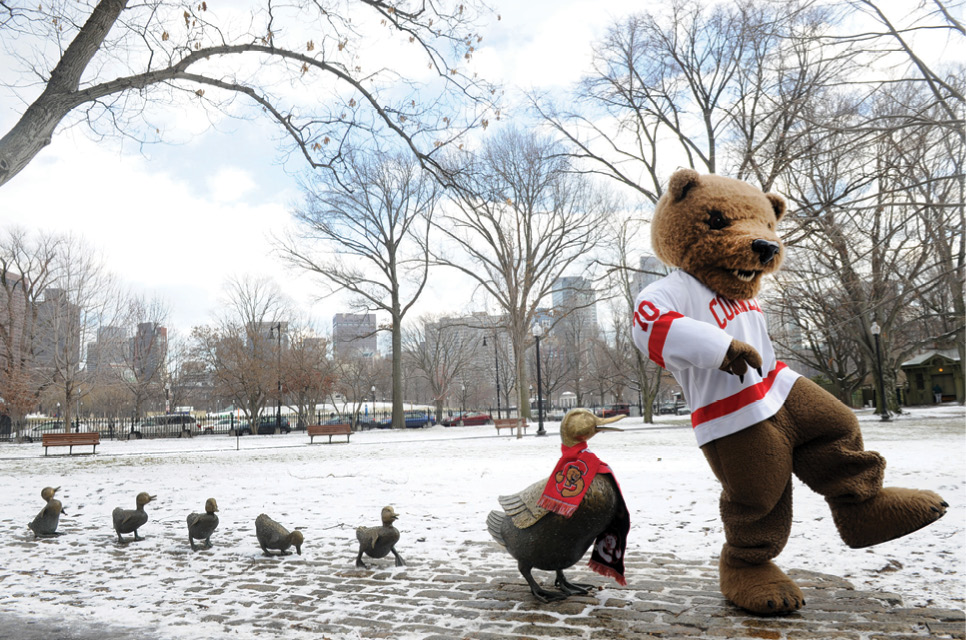 While Touchdown is generally clad in one of three team jerseys (football, hockey, or lacrosse), he has other sartorial options. 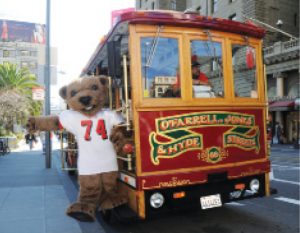 For a dinner honoring three-time president Hunter Rawlings—a classicist—he sported a toga. He also has formal wear, a Santa suit, a Christmas sweater, a Hawaiian shirt, and even pirate garb. “People are so ecstatic about the bear, they don’t realize there’s a person inside it,” says club veteran Bailey Herbstreit ’18, a Human Ecology student from Arizona. “Everyone’s guard goes down. They’re interacting with a complete stranger, but it doesn’t matter.” 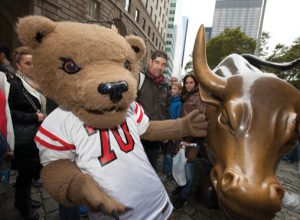 Adds fellow Bear Laura Moraff ’18, a linguistics major from the Boston area: “It gives you freedom to do things you can’t do if you’re just a normal person, like high-five random people around campus. You can get away with whatever you want, because no one knows who you are—and it’s a bear, so there are no real rules for how to behave.”

There are a few rules, though, and the Bears observe them religiously: Touchdown does not speak, conveying emotion through body language. For safety reasons—those paws don’t offer a precise grip—he doesn’t hold babies. He never removes his head in public. And he is always accompanied by another club member—an escort serving as “bear watcher”—to ensure that Touchdown doesn’t become overheated, run late, get overwhelmed by crowds, trip on uneven terrain, or suffer decapitation by handsy youngsters. “Everyone’s eyes are on you—that’s the biggest thing,” says club president Kaitlin Moore ’18, a development sociology major from Kansas City. “It’s always weird when you take off the suit, because you’re like, ‘No one’s paying attention to me’—but when you’re in it, everyone is. You can be as crazy as you want to be. I’m more of an introvert, so it’s a great way for me to get out there and express myself.”

Click to read about the bears of Willard Straight.

The concept that Touchdown allows quiet types to unleash their inner bear is a common refrain among club members—as is the fact that inside the suit, it’s really, really hot. Even a brief stint as Touchdown leaves the wearer soaked in sweat—which is why the suits are sprayed with Lysol after each use and laundered weekly. The group is in the process of upgrading its costumes; of its current three, one is a newer model—obtained from a costume company in Ohio—that has a head fan and better visibility, and the Bears aim to acquire another like it this year. (The group is supported by a gift from the Class of ’70, and Touchdown wears that number on his jerseys in appreciation.) While Touchdown appears free of charge at University events, he also attends private functions, like Cornellian weddings, for a fee. “It’s a humbling feeling,” club member Cristian Umana ’18, a landscape architecture major from Connecticut, says of wearing the costume. “You’re not the famous one—it’s Touchdown. You lose yourself in Touchdown’s image.” 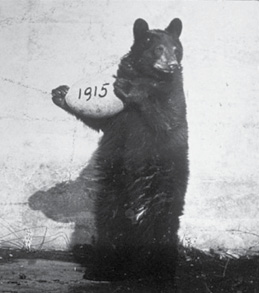 Founded in the mid-Aughts, the club—which generally comprises undergrads but is open to all Cornellians—is the latest incarnation of a tradition that traces its roots to 1915, when the Big Red got its first mascot: a live bear cub. Three more cubs followed, with the final one—Touchdown IV—acquired in the late Thirties. Years later, students started dressing up in a bear costume to promote school spirit; former mascot Neil Cohen ’72 says that in the Sixties and Seventies, Touchdown was played by a series of Hotelies whose identities were kept secret, with the mantle passed from one to the next.

During his tenure, Cohen would store the costume in his closet and tote it in a garbage bag—appearing at games on campus and away, and sometimes showing up (uninvited) to official events like the North Campus dorm dedication. Tradition held that the outgoing bear would reveal himself at the final hockey game, taking off the costume as the band played “The Stripper.” Cohen did it one better: he layered half a dozen pairs of boxer shorts under the bear suit and doffed them one by one, with the final pair taped to his torso in case he got carried away. “The bear was fabulous,” says Cohen, a Lynah legend for inventing the cowbell cheer. “I’ll tell you what was so great about it: it was totally unregulated. Nobody in the school administration knew who the bear was. There was nobody telling the bear where to go or what to do. I had so much freedom—to represent the school, to epitomize Cornell spirit in the best way I could.”

Asked to describe the current Big Red Bear’s personality—if, say, Touchdown were the subject of an online dating profile—Moore calls him “exciting, enthusiastic, and interesting.” But, she says, each club member has a distinct take on the bear’s persona—plus, given that their height has ranged from barely five feet to more than six, “anytime you see him, he might look different.” Umana joined the Bears relatively late in his Cornell career, signing up his junior fall. Having been on the receiving end of Touchdown’s goodwill, he says, he wanted to pass it on. “The bear’s enthusiasm is contagious,” Umana says. “In the suit, I still smile for pictures. No one can see you—but you still smile.”

Even more Touchdown! (Click a photo to enjoy the slideshow.) 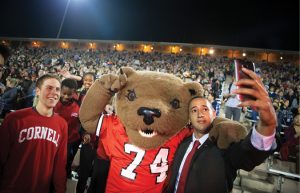 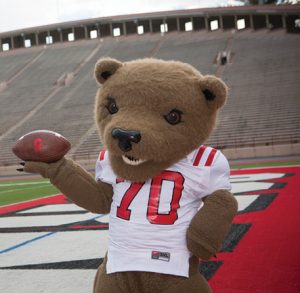 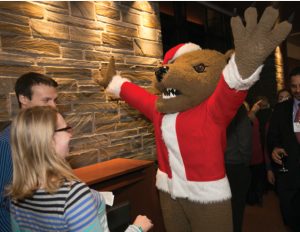 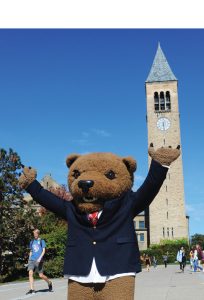 Touchdown with a random fan who demanded a selfie on Ho Plaza this fall. Photo: Thomas Hoebbel 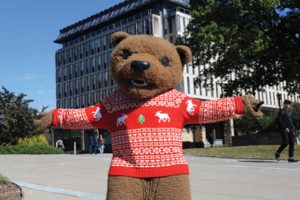 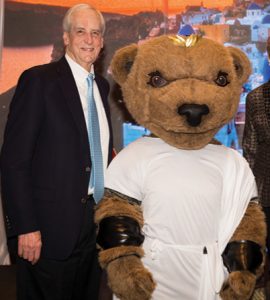