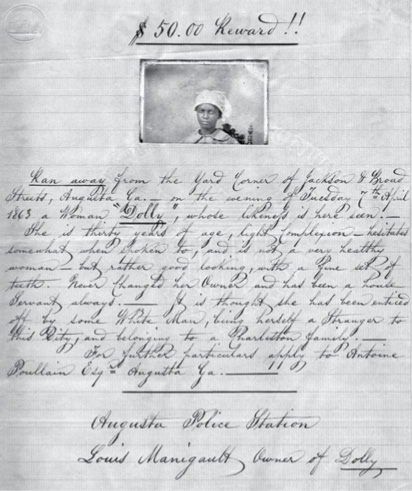 INHUMANITY, IN PRINT: Sample of a written notice offering rewards for people who had escaped slavery in the South.

Thomas Jefferson, the Founding Father who helped draft the Declaration of Independence, also authored this notice in a Virginia newspaper: “Run away from the subscriber in Albermarle, a mulatto slave called Sandy, about 35 years of age, his stature is rather low, inclining to corpulence, and his complexion is light…” The ad goes on to speculate on the fugitive’s intentions; mentions his skills, drinking habits, and tools; and offers a substantial reward for his capture and return.

It’s a bitter irony of history: due to a lack of formal records of births, marriages, and deaths, few biographical details are known about the millions of people who were enslaved in America—but among the few surviving sources of information are the many newspaper advertisements aimed at recapturing those who ran away. “For slaves, escaping was a form of resistance,” says history professor Edward Baptist. “The ads are great sources of study about people who were deliberately excluded from any kind of record-keeping.” Baptist is co-director of Freedom on the Move, a project dedicated to collecting up to 200,000 of the ads, which primarily ran in Southern newspapers. The effort, which recently received a $350,000 grant from the National Endowment for the Humanities, is a collaboration between the history department, the Cornell Institute for Social and Economic Research (CISER), the University Library, and colleagues at the University of Alabama (including Joshua Rothman ’94, chair of its history department) and at the University of New Orleans.

The project was launched two years ago with an NEH start-up grant of $60,000, which allowed it to create an electronic repository of 25,000 ads; the additional funding will support the development of a searchable database for researchers and the general public, which will also serve as a teaching tool for schoolchildren and college students. “Every additional fragment of evidence helps us construct a fuller, more nuanced narrative about the lives and struggles of enslaved people,” says Russell Rickford, a Cornell professor who specializes in African American social and political history.

Because many of the ads employed antiquated typefaces or script, optical character recognition (OCR) software can’t scan them with perfect accuracy. So the researchers are taking a crowd-sourced approach: they’re having volunteers—as well as students in history classes at Cornell and elsewhere—review the ads and check each one’s OCR scan for accuracy, then answer a series of demographic questions about the individual described. The process has proved to have a hidden benefit: participants have reported that it gave them a more personal connection to the history of slavery in America than they could glean from a textbook or lecture. “We always assumed human transcription would be necessary,” Baptist says. “But now we understand that it is one of the most pedagogically important parts of the process, because it forces readers to think about each word.”