Gunisha Kaur ’06, MD ’10, was born in India and came to America as a toddler, growing up in Iowa and Buffalo, New York. But it wasn’t until she was a teenager that she fully understood why her parents had emigrated. As Kaur learned, in the mid-Eighties her father had disappeared in the midst of violent riots in their native Punjab. Her mother began planning his funeral—assuming that her husband, like thousands of other members of the Sikh minority, had been killed in the religiously and politically driven attacks. But a few days later he came home, injured but alive. “He’d been beaten by a mob and left for dead,” explains Kaur, now an assistant professor of anesthesiology at the Medical College. “He found his way to a refugee camp, but there was no way to communicate.”

Although her father, who has a PhD in molecular biology, held an assistant professorship at a university in Punjab and had a bright academic future in India, the family decided it was too dangerous to stay. With Kaur and her older brother in tow, her parents came to America, where her father got a postdoc in a genetics lab at the University of Iowa—a potentially lifesaving move that was nevertheless a major step down professionally. “My dad was on this amazing career path, and he came to this country knowing he might have to start all over again,” says Kaur, recalling that money was so tight, the children would scrounge in the couch cushions for change so their father could buy gas to drive to work. “But it was a pretty clear decision in terms of safety and security for himself and our family.”

While Kaur’s family didn’t technically come to America through a refugee program, she says, that’s what they were—people who fled their home to escape violence and persecution. Learning her family’s story helped set the course of Kaur’s professional life: she became determined to pursue a career focused on safeguarding human rights. “The trauma that my family experienced in India is similar to that of refugees throughout the world, whether it’s Syrians or the Rohingya [the persecuted Muslim minority group in Myanmar],” she says. “Most people don’t have the opportunity to escape violence; there are so many barriers to getting out alive. Because my family was able to, I feel this incredible obligation to give back to people who are suffering.”

Although the U.S. was a relative haven to Kaur’s family when they fled India, life here hasn’t been without its challenges. Since 9/11 in particular, Sikhs in the U.S. have suffered numerous physical and verbal attacks, often by people who conflate them with Muslims due to the turbans and beards worn by male members of the faith. Kaur’s male relatives have sometimes been targets of verbal abuse or bias, such as being subjected to extra screening at the airport. “The number of discussions my family has about safety and security is sad,” Kaur says. “I’m constantly telling my dad, my brothers, my husband: ‘Be safe.’ ”

While still an undergrad, Kaur did extensive research on the anti-Sikh violence that had nearly killed her father—and published a book on the subject, Lost in History: 1984 Reconstructed. Today, Kaur not only practices anesthesiology, but does research on health issues facing refugees and survivors of torture. “Anesthesiologists are well suited to engage with global health and human rights,” she points out. “We have a holistic perspective on patients that I think even most physicians don’t realize. And pain management is a division of anesthesiology, so there is clearly a link to working with survivors of torture.”

Kaur helms her department’s global health efforts, which include a one-year fellowship and an educational, research, and outreach initiative that has offerings in the U.S., India, and Rwanda. She’s also a medical director of the Weill Cornell Center for Human Rights, which aids asylum seekers by doing physical and psychological examinations to document their claims of torture and other abuses. And for the past several years, Kaur has brought her expertise back to the Hill, co-directing a global health course for undergrads (see beow). “She’s literally and figuratively one in a million,” says Eric Brumberger ’01, an assistant professor of clinical anesthesiology who co-founded the course with Kaur. “Everything she touches turns to gold. She’s kind, thoughtful, smart, and generous with her time. She has an almost superhuman belief in what the people around her can do.” 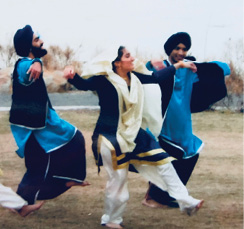 There’s a nickname for people who earn both their undergrad and medical degrees from Cornell: Double Red. If you go on to do your residency at NewYork-Presbyterian/Weill Cornell Medical Center, Cornell’s teaching hospital, you’re a Triple Red. Having also joined the med school’s faculty, Kaur is arguably a Quadruple Red. But when she first contemplated an MD, she didn’t plan to practice; she saw the degree as a credential to facilitate her human rights work. On the Hill—where she was preceded by her brother, Amandeep Singh ’02, MD ’09, now a gastroenterologist in Massachusetts—Kaur majored in biology with a concentration in neurobiology. She was also an avid member of Cornell Bhangra, the Hill’s Indian dance troupe, rehearsing long hours and traveling most weekends to perform. “It was a huge part of my identity,” recalls Kaur, who was co-captain and choreographer her senior year. “We were a very tight-knit group.”

As a med student, Kaur co-founded a nonprofit devoted to leadership development for Sikh students and young professionals. The summer between her second and third year—instead of taking the first part of the medical board exams, like nearly all future practitioners—she did research for Physicians for Human Rights. But when a mentor advised her that she’d be a more effective human rights advocate as a practicing physician, she rethought her career path. During her anesthesiology residency, she did research on refugees in the South Asian community in Queens, developing a survey to assess chronic pain in torture survivors. As a new attending anesthesiologist at Weill Cornell, she earned a master’s in medical anthropology from Harvard, commuting to Cambridge weekly for classes. She’s currently involved in numerous research projects, including a study of chronic pain in refugees who are survivors of torture, and work on sexual health education for women and girls in refugee camps. “The World Health Organization has declared the international refugee migration the worst international humanitarian crisis since the Second World War,” she observes. “Our goal is to figure out how the medical community can best serve the needs of refugees, whether they’re in the U.S. or abroad.”

According to the U.N. High Commis­sioner on Refugees, there are currently some 68.5 million displaced people worldwide. Forty million of those are “internally displaced”—driven from their homes, but within their country’s borders—while some 25 million are officially classified as refugees and another 3 million are asylum-seekers. Of the refugees, more than half are under eighteen, and 57 percent come from three countries: Syria, Afghanistan, and South Sudan. “The life of a refugee is obviously very complicated and challenging,” Kaur says. “People leave their homes and have social, economic, and family issues. Imagine someone who’s sleeping outside in the cold or traversing a sea to get to safety. These people have serious medical problems that result from being refugees, in addition to the baseline health problems that anyone would have.” Kaur admits that it’s a fraught time to work in her field, as anti-immigrant sentiment has grown in the U.S. and the current presidential administration has slashed the number of refugees allowed into the country—from a cap of 110,000 when Donald Trump took office to 30,000 for 2019. “The pushback against refugees is challenging, frustrating, and at times infuriating,” Kaur says. “So many of us strongly believe that this country is better off with immigrants, who contribute so wonderfully to research, culture, and the economy.”

In a lecture hall on the Ag Quad in mid-September, dozens of undergrads get an overview of the Ebola pandemic that struck West Africa in 2013–16. Professor Matt Simon describes how the virus is transmitted, its spread from one country to another, and the response by governments and medical personnel. As he explains, one complicating factor was that traditional burial practices—in which family members have close contact with remains—meant that mourners were falling ill and infecting others. But convincing the bereaved to abandon their long-held rituals was a delicate task. “You can understand that if this is part of your culture, and someone is telling you, ‘No, you can’t do this,’ ” Simon says, “that’s going to cause quite a bit of upset and mistrust between the community and healthcare workers.”

An internist and epidemiologist, Simon is an assistant professor of medicine in the Division of Infectious Diseases at the Medical College. This fall, he’s one of a dozen colleagues making the 200-mile trip upstate to lecture in Nutritional Sciences 3090: Global Health Case Studies from Weill Cornell Medicine. Co-founded by WCM professors Gunisha Kaur ’06, MD ’10, and Eric Brumberger ’01, the class meets on Fridays, with a different faculty member lecturing each week on such topics as the Syrian refugee crisis, worldwide mental health issues, and health as a human right. The course is pass/fail; requirements include assigned readings and a final paper. “The lecturers talk about the subjects with passion, and they also describe their own experiences,” says Susana Zeng ’21, who’s taking NS 3090 this semester. “It’s a nice perspective for us to see.” 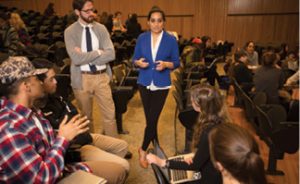 Kauer with colleague Eric Brumberger ’01, chatting with students after a NS 3090 talk in spring 2016.Jason Koski/UREL

Built into the format are post-lecture chats, in which students can have informal discussions with the speakers over coffee. After Simon’s talk, he and a half-dozen undergrads gathered in the sun on the Ag Quad for a conversation that included not only a more detailed dive into the Ebola outbreak, but a description of his own career path. “In Ithaca, there aren’t many doctors that you can shadow for experience,” notes Mikayla Fuchs ’20, who’s planning a career in medicine. “It’s interesting to hear from all these different doctors who are successful in their fields.”

When NS 3090 was first offered in a seven-week version in spring 2016, it drew capacity crowds. But before being held as a full-semester course in fall 2017, it had to be substantially reworked. “It was a hit from the start, but it was raw and needed a lot of development,” says Brumberger. “The students simultaneously loved it and destroyed us on our evaluations.” The main issue: the workload, which was better suited to an MD or PhD level. “We had so many complaints about how much homework there was and the readings we assigned,” says Kaur. “We were Medical College faculty trying to teach at an undergraduate institution—and to be honest, we didn’t know what we were doing.”

But the reimagined course got stellar reviews, and it’s now offered on an annual basis. “The course is a great opportunity to build connections with doctors from the medical school, which is so far from Ithaca,” says Lucie Fan ’19, who’s waiting to hear the results of her med school applications. “It has broadened my perspective of what medicine looks like in different areas in the world. Everything is super exciting to learn about.”