In “The Wife of Bath,” one of Chau­cer’s best-known Canterbury Tales, Queen Guinevere asks King Arthur to let her pass judgment on a knight who has raped a maiden. She’ll spare his life, she tells the miscreant, if he can divine what women want most in the world. After long travels, he learns the answer: they want sovereignty over their husbands. Thus freed, the knight fulfills a promise to marry the homely old woman who told him the secret. When he grants her the power to make her own decisions, she magically becomes young and beautiful…and they live happily ever after. 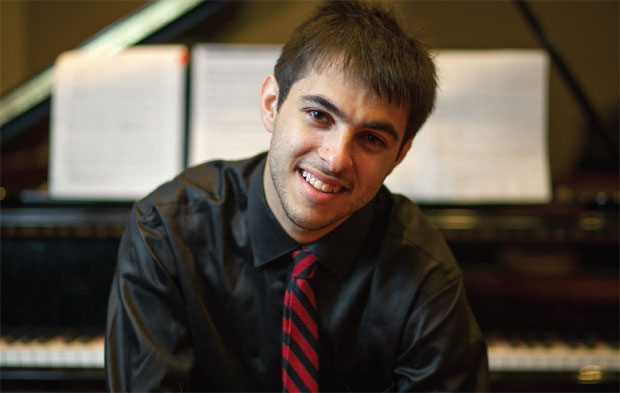 I pray Jesus to cut short the lives
Of those who’ll not be governed by their wives.

Misogyny versus feminism in Chau­cer’s work, it goes without saying, has fueled many a PhD thesis.

This spring, music major Danny Bernstein ’14 put a modern spin on the classic tale. Entitled Far From Canterbury, the full-length musical had four performances at the Schwartz Center—a rare production of an original work by an undergrad. “It was a story I knew from childhood—but I realized that it’s darker than I remembered, and it has these sexist undertones,” Bernstein says of “The Wife of Bath.” “It’s so compelling; I love the conflict. Someone’s life is on the line, and to get out of it he has to solve a riddle.”

Featuring a cast of twelve students, Bernstein’s show—he wrote the book, music, and lyrics—takes some major departures from the original plot. It sets the tale in a kingdom where fairy tales have such cultural currency, their overwrought adventures have warped people’s view of the world. As the characters sing in the opening number:

Take me from this life I lead
Give me what I really need,
And let me leave this world behind.
Make it wild or make it scary,
Make it extraordinary.

The hero, a young knight named John, is so shy he can barely talk to girls. Unlike in the original tale, he’s no violent criminal; coming upon a princess sleeping in a tower, he assumes she needs rescuing, so he kidnaps her. Joining him on his quest to learn women’s true desire are his two best friends—one a spunky young woman fleeing an arranged marriage, the other a fellow knight who’s comically irresistible to the ladies. “It’s a coming-of-age musical,” Bernstein says. “They’re unconventional characters trapped in a conventional fairy tale world—and the conflicts they face are similar to what kids in college face. ‘Where do I fit in? The script I was given doesn’t match the setting. How do I resolve that, and where do I go from here?'”

The Schwartz production is the latest honor for the Westchester County native, who started piano lessons at age three and—having quit because he hated practicing—eventually taught himself to play entire Broadway scores by ear. As a freshman, Bernstein took first place in Cornell’s annual undergrad playwriting contest and went on to direct (or musical direct) numerous shows on campus; he was recently named East Hill’s Undergraduate Artist of the Year. As rehearsals for Far From Canterbury were gearing up, he learned he was one of three composers—and the only student—selected for a prestigious musical theatre workshop in Los Angeles in May. “He’s a very talented kid,” says theatre professor Bruce Levitt, who praises Bernstein’s show for its “youthful, buoyant” score. “He’s been living, eating, and breathing music since he was very young. He’s disciplined, and he’s persistent. He writes an incredible variety of music, and he’s a gifted pianist; he can change things on the spot.”

Among his inspirations for Far From Canterbury, Bernstein’s cites Into the Woods—Stephen Sondheim’s classic about the darker side of fairy tales—as well as recent works with strong ensembles like Batboy (a satire ripped from the headlines of a supermarket tabloid) and Peter and the Starcatcher (a tragicomic prequel to Peter Pan). After graduation, he aims to seek his fortune on the Great White Way; for starters, he hopes to enter BMI’s celebrated musical theatre workshop and to earn a living as an accompanist. “I’m going to try,” he says. “Hopefully it’ll work out, because I have no backup plan.”