Other than the fact that she has eleven felines in her two-bedroom condo in Phoenix, Kate Benjamin ’93 isn’t your average cat lady. 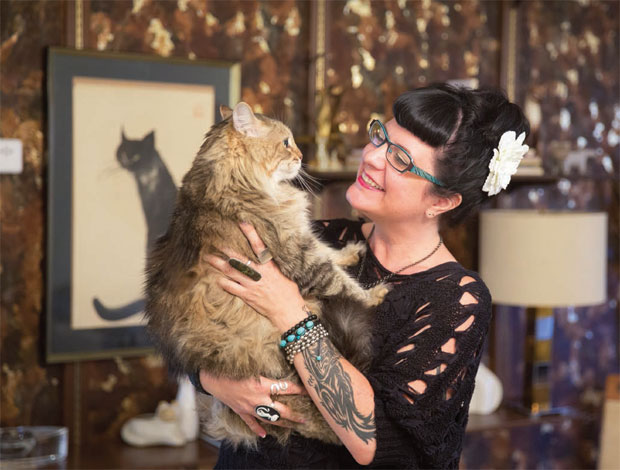 With jet-black hair coiffed like a Fifties pin-up girl and tattoos that would impress a hard-core biker, Benjamin challenges the image of a reclusive spinster who hoards kittens like candy. She’s hip and stylish—like her thriving online magazine, Hauspanther.com, a kind of Architectural Digest for design-conscious cat lovers.

As the go-to source for fashionable pet owners fed up with carpet-covered scratching posts and bland plastic litter boxes, Benjamin highlights chic, cleverly crafted cat-related items, produced mostly by mom-and-pop firms. Her unique finds would fit in many modern homes—from sleek, stainless-steel drinking fountains to raised, pod-like beds that resemble UFOs. Among her current favorites are a sinuous cat tree called the Curvynest and an elegant, bowl-shaped ceramic bed, both of which could pass for contemporary art. “People say, ‘Wow, that’s spectacular. That’s for a cat?'” says Benjamin. “It looks like a piece of modern sculpture.”

Branding herself as a “cat style expert,” the forty-two-year-old Human Ecology grad has set up a 2,000-square-foot studio in downtown Phoenix, where she creates her own line of handmade toys and accessories (and where a twelfth cat, a blind rescue named Claude, makes his home). She’s also developing a consulting business for clients who want to “catify” their homes—arranging them in a way that keeps pets happy and healthy without surrendering personal style. Her talent for devising spaces that are both feline-friendly and fashion-forward is showcased on Animal Planet’s reality show “My Cat from Hell,” where she helps cat behaviorist Jackson Galaxy resolve conflicts between owners and their furry friends. The two are collaborating on a design book about the topic, due out later this year. “She has the ability to calm down humans who don’t want to ‘catify’ their home until they’re sure it will work for them,” says Galaxy. “I represent function and she represents form.”

Benjamin grew up in Plattsburgh, New York, where her father was a restaurateur and her mother ran gift shops. On the Hill, she earned a degree in design and environmental analysis with a concentration in interior design, a subject she went on to study at Arizona State. Before her cat career took off, she worked mostly in public relations, graphic design, and event planning, including a stint as marketing director for Boon, a company that makes stylish children’s products. Meanwhile, Benjamin was becoming frustrated at the lack of attractive accoutrements for her growing brood; she found most mass-market merchandise to be ugly or poorly made. She wondered why more pet-related businesses weren’t shifting toward sophisticated, high-end gear, as had happened in the kids’ industry. “The market was wide open,” she says. “Nobody was tackling it except for a few small companies.”

She kept scouring the Internet for hip feline products and, in 2007, began blogging about her finds. (Her blog was originally called Moderncat; she changed the name last year to sidestep a lawsuit with a Canadian publisher that had launched Modern Cat magazine.) She soon gained an enthusiastic readership, with manufacturers asking to advertise on the site and sending samples for Benjamin to review. By 2009, she was able to quit her day job. These days, she says, Hauspanther gets about 200,000 monthly page views, and her posts have been mentioned by notable cat aficionados like author Anne Rice and comedian Paul Reubens. “You can see this huge change,” she says. “Even if you just walk through the cat product sections in Walmart and PetSmart there are better colors, better patterns, and more interesting materials, shapes, and forms.”

But to Benjamin, her job goes beyond aesthetics and into animal welfare. For example, she says, if humans don’t buy scratchers because they find them too ugly, their cats may claw the furniture—possibly leading frustrated owners to surrender them to a shelter or even abandon them. She thinks stylish, functional products can improve the relationship between pets and their guardians. “I’m saving cats’ lives with design,” she says. “That gives the heart to the business and makes it my passion.”