Vanilla bean granola with dried cherries seems fairly conventional—though it may belong at the upscale end of the cereal aisle. But what about rosemary-flavored granola with Zante currants? Or a cheddar cheese variety that’s seasoned with cracked black pepper? 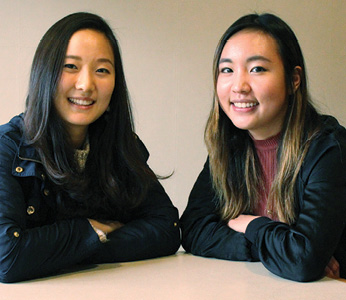 These unique flavors are the bread and butter for Bumble & Butter, a boutique food business run by Hotelies Jamie Kim ’19 and Katie Lee ’19. The two undergrads are involved in every step of production—from baking each seventy-five-pound batch (in a commercial kitchen in Stocking Hall) to sealing every bag. In the company’s early days, Kim even hand-painted the labels (which, she admits, “was nuts”). “There have been so many nights when I’ve pulled all-nighters to finish an order,” says Kim. “It’s exciting, but it’s definitely been difficult.”

As the name implies, all of Bumble & Butter’s granola is made with real honey and butter. Kim and Lee source the latter in fifty-pound blocks from an Upstate dairy farm whose cows are grass-fed, driving three hours round-trip to pick it up; their honey comes from an Ithaca apiary. The final product, Kim says, is “buttery and crunchy, and it has a nice balance of sweet and salty. It has layers of flavor, so each bite is a little bit different.” In addition to their three core flavors, Kim and Lee make the occasional limited-edition variety, such as black truffle or sweet potato with ginger and cinnamon. On their packages, they offer some unusual serving suggestions, such as topping tomato soup, salads, or even macaroni and cheese. “Honestly,” says Lee, “I just like eating it straight out of the bag.” 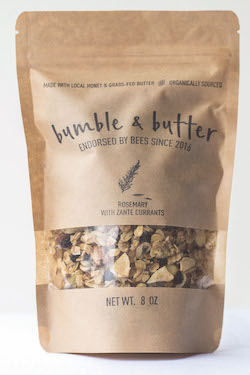 A Kickstarter campaign, launched in late 2016, raised more than $2,000 in seed funding; Lee notes that about 70 percent of backers came from outside their social circle (it helped that the venture was featured on the site’s “Products We Love” page). In 2017–18, the pair joined Cornell’s eLab startup accelerator, which gave them business experience, academic credit, and faculty mentorship. “They’re really bright and hard-working,” says their eLab mentor, Steven Gal ’88, BS ’90, a senior lecturer in management at the Johnson School. “When you work with them, you see just how intense and focused they are, and how much time and energy they’ve put into this.”

In addition to being sold through their website, Bumble & Butter granola is available at ten Ithaca stores—including Collegetown Bagels, the Statler gift shop, and CALS’ Manndible Café—and one location in Syracuse. They recently started selling on Amazon—offering Prime shipping, which they say has spurred sales dramatically. They also handle the occasional large order, including 240 bags for a monthly subscription box featuring honey-based products, and 500 bags they put together as wedding favors, complete with personalized labels. In response to their growth, the pair recently hired food science major Devon Rosen ’19, who will oversee safety issues such as shelf life.

Hungry for more?
Subscribe to your Alumni Magazine today!

In running the business, Lee contributes more on the marketing side. Kim—who has made granola since high school, when she would give away jars of the rosemary flavor to friends and family—focuses on the culinary end. She traces her inspiration for making savory granola to a summer job in guest relations at Eleven Madison Park, the renowned Manhattan restaurant (co-owned by Will Guidara ’01) that tops many best-of lists. “I noticed that chefs were using it as a way to elevate a dish by adding different textual elements,” says Kim. “Savory granola is big in the dining industry, but it’s not being seen in grocery stores.” And indeed, she admits that many people remain skeptical about sampling it. “They’re like, ‘Did you say cheddar?’ ” says Kim. “And they’re always surprised by how much they like it. I think that’s the best part of having a granola business—you can change the way people think about food.”