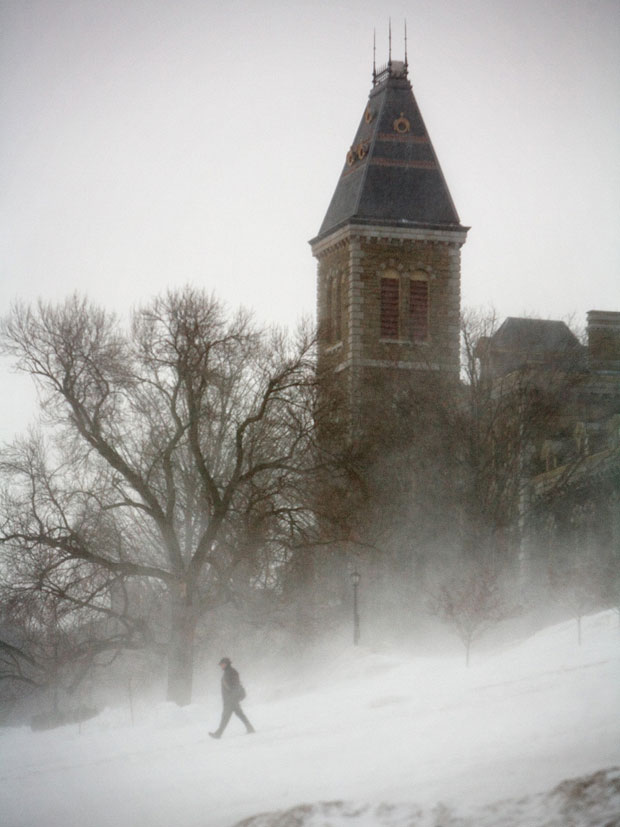 Noun: 1) A hybrid type of precipitation—usually a mixture of snow, hail, rain, and slush—accompanied by gloomy skies and bone-chilling cold, endemic to Ithaca, New York; 2) a favorite topic among Cornellians.

For as long as the University has been standing above Cayuga’s waters, Cornellians have been complaining about Ithaca’s winter weather—not to mention the ordeal of trudging through deep snow and slush (uphill, both ways) to get to class. Last year, the grumbling was particularly loud. Although Ithaca didn’t have the record-breaking snows that buried New England, it did suffer through brutally low temperatures, with the second month of 2015 going down as the coldest February ever recorded in the city. And that’s official: the figure comes from no less an authority than Mark Wysocki, MS ’89, the New York State Climatologist and a senior lecturer in earth and atmospheric sciences on the Hill.

With an average temperature of 10.1 degrees Fahrenheit, Wysocki notes, February 2015 beat the runner-up—1979—by more than an entire degree. It got so bad, in fact, that the Ithaca/Tompkins County Convention & Visitors Bureau threw up its hands and transformed its homepage into a tongue-in-cheek recommendation to decamp to the Florida Keys. (“It was honest,” agency director Bruce Stoff said at the time. “It was what people were thinking.”) The post went viral, crashing the bureau’s website and reaching an estimated 590 million people online.

As Winter 2015–16 settled in, CAM decided to em­brace the inevitable by taking a lighthearted look at East Hill’s weather woes and wonders, past and present. Have a Cornell-in-winter memory you’d like to share? Post it at cornell­alumni­magazine.com. As Wysocki observes: “From a meteorologist’s standpoint, you don’t get bored living in Ithaca.” 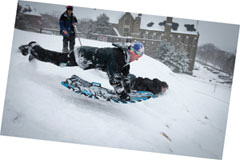 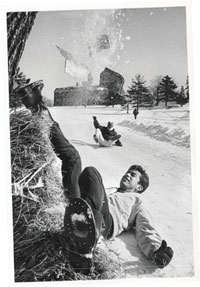 Slippery Slope: At number twenty-four on CAM’s original 1995 list of the “161 Things Every Cornell Student Should Do” is traying down Libe Slope—meaning “borrowing” a tray from a dining hall and using it as a makeshift sled. Though traying has joined swimming in the gorges as a once-beloved student pastime that is now illegal—and indeed, many of the dining halls have stopped providing trays—year after year, suspiciously smooth tracks down the slope are still known to appear overnight.

The Beebe Lake Rhino
As the (possibly apocryphal) story goes: one winter morning in the Twenties, Cornellians were surprised to find a set of large animal tracks leading across campus to a hole in the frozen lake, where the creature appeared to have fallen in and drowned. A zoologist examined the prints and determined that they belonged to a rhinoceros. At the time, the lake was the source of most of the drinking water on campus and many people refused to partake of it; those who did claimed it had a distinctly rhino-like aftertaste. The tracks turned out to be the work of infamous prankster Hugh Troy ’26, who appropriated a professor’s trash can—made from an actual rhinoceros leg—to fake the footprints. 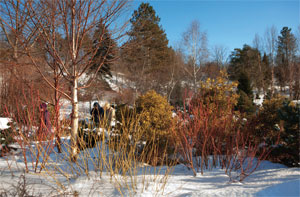 Growing Season? Though most of Cornell Plantations’ twelve specialty gardens are desolate at this time of year, its newest was designed to flourish from December to March. The Mullestein Winter Garden boasts more than 700 plants—including small conifers, birches, and willows—selected for their bark texture, winter fruit, cones, interesting growth patterns, and varied shades of green.

Remember the Blizzard of ’93? Cornell has a reputation for staying open even during the kind of nasty weather that closes schools and offices around Tompkins County—but a historic blizzard in 1993 actu­ally forced it to shut down. At the time, Matthew Hammond ’91 was working as the opening supervisor at Robert Purcell Dining and living a couple of miles away in the Village of Cayuga Heights. “The University closed, but of course the students in the dorms had to eat, so dining didn’t close,” recalls Hammond, a government and history major who’s now an attorney for the U.S. Department of Justice in Washington, D.C. The county closed the roads—so Hammond had to get creative. “I borrowed my housemate’s cross-country skis and got up at four to ski into work,” he says. “It was just me and the snow plows.” The storm, which dumped thirty inches of snow on East Hill, also looms large in the memory of Peter Salino ’79, the recently retired director of the grounds department, where he worked for twenty-seven years. “I called Cornell Dining to ask them to bring us some food, and building care to get some cots for my crew,” Salino, a former environmental science major recalls. “I didn’t get home for three or four days.”

Icicles 101:  NYS Climatologist Mark Wysocki offers a primer on the photogenic phenomenon, of which Ithaca seemed to have a bumper crop last winter. “If you don’t have good insulation in your attic, heat will rise up through the ceiling, warm the roof, and melt the ice,” he explains. “And if you don’t clear your gutters of the leaves from the autumn, then the water backs up, overflows, and freezes in the air as it drips off.”

Glove Box
A cardboard box at the Cornell Store filled with forlorn, mateless handwear seeks to help Cornellians “find that one darned lost glove that renders the remainder moot.” (The box also accepts mittens and other mislaid outerwear.) Comments on the associated Facebook page range from “Found this lonely glove right outside of B25 in Warren Hall” to “Not a glove, but Cinderella, you seem to have lost your slipper across the street from Rand and Milstein.” The latter is accompanied by a photo of a solitary women’s heel, perched atop a snow bank.

“We had what I hope is our last out of door surveying lab thisafternoon. In the way of clothes I wore a gauze combination, a woolencombination, a paper jacket, a corset, a muslin comb­ination, and a petticoat and corset covering shirt waist, suit, winter coat, shoes and stockings, galoshes, gloves, muff, and hat. At 4 o’clock we decided we were too cold to stay out any longer.” 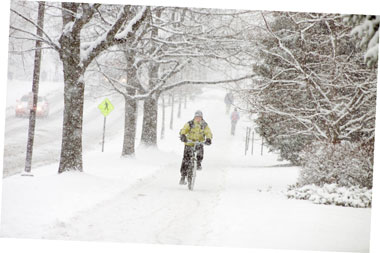 Blades of Glory
When Cayuga Lake completely froze over in the winter of 1911–12, Floyd “Flood” Newman 1912 and four friends decided to take advantage of the opportunity. They skated from the lake’s southern tip in Ithaca all the way to the northern end, roughly forty miles, before hopping on a train back home. Flood’s skates are now on display in Helen Newman Hall (which he endowed, along with Newman Lab and Newman Arboretum).

Snowy Aloha:
Though Hawaii has many of the same retailers as on the mainland, “they sell summer clothes all year ’round,” notes Nicole Nakakura ’16, who hails from Kona. So Cornell’s Hawaii Club hosts an annual trip to the massive Destiny USA mall in Syracuse to help students shop for winter clothing. “For a lot of us, when the first snow comes it’s a really magical experience,” says Nakakura, a landscape architecture major and the club’s co-president. “And then you talk to us a week later and we’re like, ‘Okay, when is this going to stop?’ ” Nakakura’s advice to incoming freshmen from tropical climes: invest in waterproof boots and a coat that covers one’s posterior. “They make all the difference.”

” The men here use something I never saw at home. They call them skis. They are about seven or eight feet long and they fasten one on each foot and with poles in their hands to guide them, slide down the steepest hills. It is rather dangerous, I believe, but they say it is lots of fun. Perhaps you know all about skis, but they were new to me.” 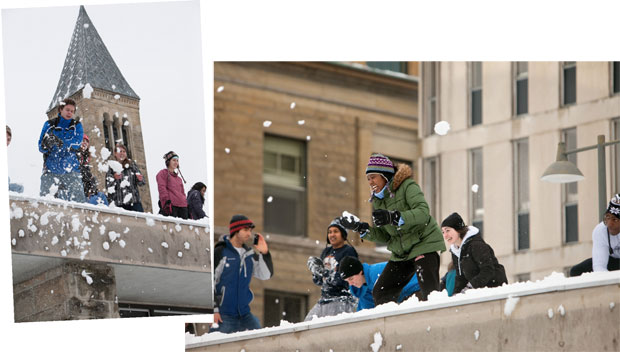 Last winter was the fifth-coldest on record, with an average temperature of 19.5°F

Shovel Ready
Each time it snows, the University’s grounds staff clears some sixty-one miles of sidewalks; over the course of a typical winter, they distribute more than 2,500 tons of salt on campus roads and pathways. But did you ever wonder how the crew members themselves make it to the Hill when the county’s roads are closed? “Typically, we keep an eye on the weather and get there ahead of the storm,” says former grounds director Peter Salino. “Historically, 95 to 99 percent of our personnel show no matter what the conditions are outside.” Thanks in part to that stalwart crew, the National Weather Service has declared Cornell “StormReady.” That means, among other things, that the University has a twenty-four-hour emergency operations cen­ter and warning system in place, is able to monitor local weather conditions, and conducts preparedness programs.

Lake Effect: Up until the early Fifties, when Beebe Lake stopped freezing over reliably, annual ice carnivals were held on its solid surface. Hundreds of people would attend to skate, hear bands, and enjoy refreshments in the warming sheds. Toboggan runs on the southern shore sent riders careening across the frozen lake and “broken arms and legs were not uncommon,” says University Archivist Evan Earle ’02, speculating that many of the injuries stemmed from collisions. Until Lynah Rink was constructed in 1957, Big Red hockey teams played on Beebe Lake, cleared by horse-drawn “zambonis” that would drag plow-like equipment across the lake to pick up ice shavings.

Research suggests that over 80% of our readers would prefer reading these stories in print. Read better, read smarter — subscribe today!